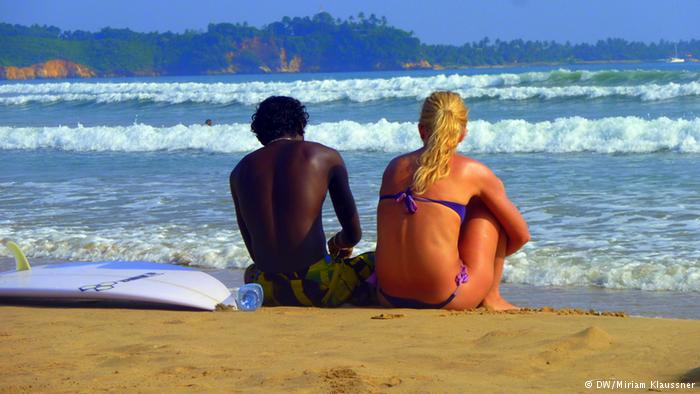 In the United States, ‘beach boys’ would probably be associated with the surf music band based in California at the dawn of the ‘60s. Somehow, the term found its way over the years to the Deep South of Sri Lanka, where the label still holds nothing but vague implications.

Who are the beach boys, and why are many people – both local and foreign – o wary of them? Image credit: DW/Miriam Klaussner

For quite a while, the term ‘beach boys’ has been used adversely to stigmatise groups of people, whether they be poverty-stricken rent boys, lower-income beach workers, or others who attempted to use their European girlfriends as a ticket out of Sri Lanka. Similarly, they have received their fair share of negative publicity by the media.

According to this article, for instance, beach boys are the “political thugs of tourism.” However, speaking to people down south sheds light on other aspects of the matter, painting a more nuanced picture than presented in mainstream media; yes, the south is home to a number of ‘beach boys’, and while some of them may be involved in questionable activities, not all of them have suspicious intentions, nor are these intentions all the same.  Troubling accusations ‒ especially if they are unfounded ‒ that are made about villagers of the south, who take their reputation quite seriously, have created a lot of friction between the southerners and the city dwellers of Colombo and other urban centres.

So if these allegations are wrong,  who then are the beach boys and what do they really do? The lack of clarity about them inevitably leads to vague answers.

In an email interview, the Colombo-based Dutch psychologist, Dr. Marcel de Roos, discussed the influence of what he perceived to be beach boys, saying, “Usually they are locals who try to “befriend” (foreign) girls on a holiday. They usually stem from the relatively poor coastal areas themselves. You won’t find many beach boys from Colombo-7.”

He added, “‘Beach boys’ are a phenomenon I have seen everywhere from the beaches of North and South America to Europe, North Africa, Middle East, etc. Even in the Netherlands, they can be picked out easily.”

He doubts that the locals are so against those beach boys that he defined. Instead, he believes that it is probably more the government and the tourist industry that have given them this bad reputation.

“Under the previous government, there have been many incidents in the South as well as in Colombo nightclubs where sons of influential politicos preyed upon western girls. Not the typical beach boys, but the tourist industry got very worried. Perhaps this might be a source,” he explained.

When Mirissa-based hotel owner Asanka Duminda was asked about who the ‘beach boys’ were, he said that the term is used quite loosely to describe the features of the boys who work on the southern beaches. Particularly, features like the Lasith Malinga hairstyle that the local boys are so fond of.

“I think when people use this term, they are referring to guys with long hair and blond tips. Because they are always hanging out on the beach,” he said.

According to him, business owners have spread rumours about dangerous ‘beach boys’ to win exclusivity over the financial benefits that the tourists bring along with them. “As a tourist, I want to ensure that you only eat in my restaurant, drink in my bar, and buy from my shop. I don’t want you to go anywhere else far from my property. In order to do this, I have to create such a bad story and scare you from going anywhere and tell you that if you talk to others many problems will happen. So it is merely done to generate more business,” he said.

According to this theory, an entire campaign was started by hospitality business owners and travel agents, attacking the local boys who soon emerged as potential competitors. The young boys who lived near the beach were the first to get exposed to tourism and quickly learned English as well as understood how to deal with tourists effectively.

Defense Of The Accused

Opinions differ as to whether beach boys are victims of, or hindrances to, the hospitality industry down south. Image credit: paradisebeachmirissa.com

Chandi, who started working on Mirissa’s beach around ten years ago, agrees with Duminda. In fact, he is of the opinion that when foreign girls come to beautiful beach towns like Mirissa, they seek to hook up with local boys.

“When I was in Europe,” he says, “a local magazine article said that foreign girls like to come to Mirissa beach because it is a good hook up beach. They are just attracted to our beautiful beach town and the local boys. I don’t think that Mirissa boys are following the money. I think they are just following the sexy girls. And the girls are already here for a holiday, so why not. This is just like why so many foreign men go to Thailand,” he said.

In spite of his theories, however, Chandi’s own popularity isn’t always of a positive sort. Considered to be one of the feared ‘beach boys’ in the area, there is an entire blog dedicated to trashing him, run by one of his angry former girlfriends, he says. Some of her claims, such as his involvement in a gang rape, have indeed been refuted by the villagers who are acquainted with him.

Having worked on Mirissa’s beach for nearly a decade, Chandi must have been from the first batch of local boys to get in direct contact with foreigners. Like many boys around the world, he and other young workers on the beach soon hoped to build relationships with appealing, potentially romantic partners at a time when the local girls were off-limits. In the meantime, they found plenty of other options as the number of tourists continued to increase.

When it comes to foreign girls in the area, you rarely come across bad feedback as a result of interactions with the local boys. In fact, there is a community for wives and long-time girlfriends of local men across the south, some of which are permanently based in their respective villages. None of these women view their partners or anyone they associate with as “beach boys.”

J.K., a European lady who has lived in Mirissa for three years, thinks that the term only refers to outlaws or those with criminal intentions like stealing. “In Dickwella, where I stayed once in a resort, I asked the guys there about why every place there is fenced in. They told me it is to keep the beach boys, the thieves, out. This is what crosses my mind when you say “beach boys.” Most of the young men around the world are promiscuous. It doesn’t mean that they have criminal intentions,” she said.

For A. P., who has been regularly visiting her boyfriend and his family in Sri Lanka for more than five years, the term mainly referred to “men who make money on the beach, but not via a regular job. I do not regard waiters, tour guides, and surf teachers, as beach boys. A beach boy for me is someone who tries to earn money without actually working. Rather they find a foreigner who will sponsor them by giving them money, buying things for them, or just supporting their lifestyle.”

According to one theory, beach boys could be “financially rewarding to Sri Lanka’s tourism sector.” Image credit: mirissaeye.com

The 8th International Conference on Business Management in 2011 saw the presentation of a research paper titled The Impact of Beach Boys on Tourism that “investigated the impacts and threats of beach boys to the society while giving suggestions to bring them to a formal stream.”

Presented by lecturer R. S. S. W. Arachchi of the Sabaragamuwa University of Sri Lanka, the paper tackled the topic from a completely different angle. While it defined the beach boys as individuals who exchange sexual favours in return for monetary compensation with tourists, it discusses the practice in a positive light that could be financially rewarding to Sri Lanka’s tourism sector.

According to the study, many of the foreigners in the research area quite liked the local boys, a result that reflects the sentiments of the foreign women whom this writer talked to in Mirissa.

The research also points out that wherever there is poverty side by side with tourism, there are also rent boys who offer services to older, wealthier tourists. Some of the particular examples cited include Italy’s “Papagalli”, the “Praterbuben” in Vienna, and the German version of “Bauernfaenger.”

In this particular case in Sri Lanka, where poverty is prevalent, the society has turned against the “beach boys” who often hail from the poorest segments of the hierarchy.

Another explanation could be that because those boys are the ones who interact the most with tourists, and hence the most likely to be affected by them, the mainstream society is rejecting them as a representative of foreign influence in Sri Lanka.

Whatever it may be, one thing’s for sure: the ‘beach boys’ phenomenon is very much a part and parcel of Sri Lanka’s tourism sector today. Despite people’s apprehensions, the subject warrants discourse ‒ both to bring about a better understanding of the matter, as well as put to rest any unfounded fears that could potentially have an adverse effect on tourism.