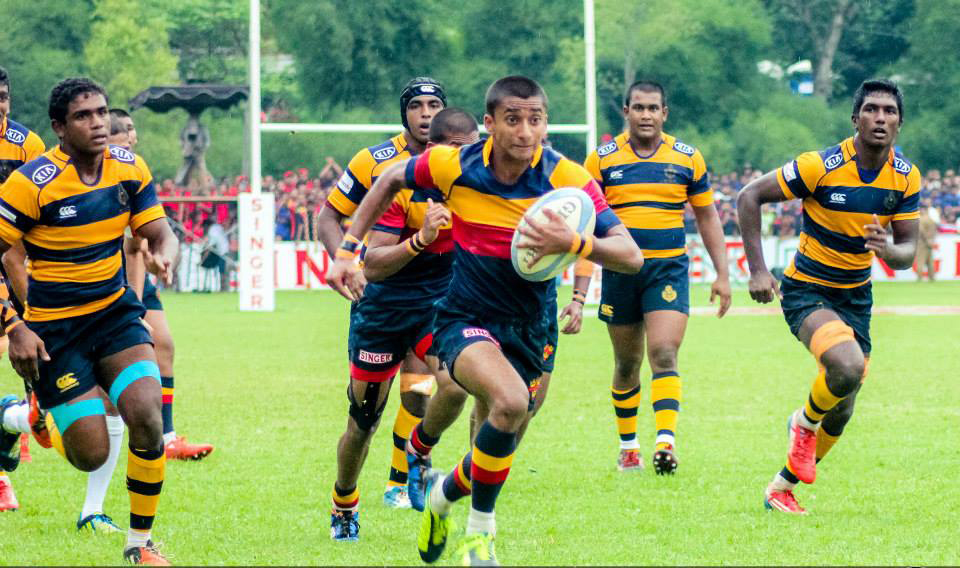 While cricket was the main Sri Lankan schoolboy sport for quite some time, rugby attracted quite a bit of interest in 1916 when it was first introduced to Reid Avenue. Four years later, the Trinitians came into play, and the oval ball game became the centrepiece in the school sports arena. Call it what you want, a social event, sporting event, or the most important annual encounter in school rugby, the fact remains that the Royal-Trinity Rugby encounter is in fact the most anticipated event of the year for the Lions, the Tuskers, and rugby enthusiasts across the island.

Scenes from the 1st Leg: A Trinitian heading towards a try while a Royalist tackles him. Image credit: Trinity Media Unit

The Bradby Shield encounter is an event marked in gold in any Royalist’s or Trinitian’s calendar. Held between two of the most prestigious boys’ schools in the country, Trinity College Kandy and Royal College Colombo, this contest is referred to as the clash between ‘Lions and Tuskers’.

There are two encounters to the Bradby Shield: the first leg and the second leg. The victor is decided on the aggregate of the scores from these two matches, usually played a few weeks apart. The shield is presented to the winning team at the end of the second leg. One of the main reasons in having two encounters is so that the event can be hosted in the home towns of both the schools.

The traditional Bradby Shield encounter was born four years later in 1945 when E.L. Bradby, the then principal of Royal College, brought forward a proposal of playing an annual two-match series, one in Colombo and the other in Kandy, to ensure the success of the series. Thus, the fight for the coveted Bradby Shield began.

The Encounter And The Shield

The prestigious Bradby Shield, for which a two-part battle is fought by school boy ruggerites every year. Image courtesy trinitylk.com

When the then Trinity principal, C.E. Simithraarartchy, agreed to Royal principal Bradby’s offering of a shield, the  Bradby tournament has been played every year without a break. The winning school gets to hold on to the Shield for the ensuing year, until Bradby season next comes around.

It is a known fact that the Royal-Trinity encounter draws the most number of spectators in any rugby match in the country, whether it be at school level or club level. Old boys (Lankan school lingo for ‘alumni’) of both schools, here and abroad, use this historic encounter as a platform to reminisce the Bradby encounters of their school days.The 100th rugby encounter between the two schools was played in 1983, where the chief guest was E.L. Bradby himself, while his wife was the guest of honour of the Royal College Union.

In 1971 only one leg of the encounter took place due to unrest in the country. In 1992, both legs of the encounter ended in draws, making it the first and only drawn series of the contest up to date.

The coveted shield is a wooden disk decorated with intricate traditional Kandyan metalwork. Every true Royalist and Trinitian understands the value of the shield.

The teams all fired up and ready to begin the 1st Leg of the 72nd Bradby. Image credit: Royal College Photographic Society

The 2015 Royal pack proved to be strong and indestructible to the point where the collective efforts of Captain Banuka Gamage and #8 Supun Warnakoolasuriya, along with the rest of the 1st XV, managed to achieve the near impossible by coveting the Shield after a lapse of four years. Last year was indeed a Golden year for the Royalists.

This year, Nikhila Gunadheera, as both Captain and #8, has the honour and weight of playing both Gamage’s and Warnakoolasuriya’s former roles.

Gunadheera did manage to prove his strength in playing both these roles at the Bradby 1st leg, played at the Royal College Sports Complex on April 30, which resulted in a decisive 22-17 for the Tuskers amidst mud, rain, and sweat.

Royal assembled their points off three tries, two conversions, and a penalty, while Trinity managed to accumulate two converted tries and a single penalty. The hosts snatched a much needed win to take 2nd place in division 1A of the schools rugby league, with Trinity being pushed down to 3rd place, while giving Royal a five point lead going into the second leg in Pallekele.

Meanwhile, fourth year player and coloursman Rahul Karunathilake will be leading the Lions to a possible victory, provided they even up the score at Pallekele at the 2nd leg.

The 1st Leg of Bradby 2016 had two noteworthy instances where the history of schoolboy rugby was rewritten with golden ink.

The first instance was when Royal centre Janidu Dilshan intercepted a pass off of Anjana Bandara to touch down for the fastest try in the 72-year long history of the Bradby. The event was further strengthened when Ovin Askey added the extra points, and the Tuskers had a dream start (7-0).

Later on, for the first time in a school encounter in Sri Lanka, referee Dinka Peiris went to the Television Match Official (TMO) on the Diluksha Dange try, and TMO Vimal Perera declared that Lashan Wijesuriya’s offload was backwards, and referee Pieris awarded the try.

Trinity Captain, Rahul Karunathilake, told Roar that he believes that they “have a good chance of regaining the shield this year.” He went on to say, “We have learnt from our mistakes and we have trained incessantly hard. The fact that we are going to be well prepared, and the brotherhood that holds us together, will be an immense contribution to our team.”

Karunathilake, who has been a dominant second row player, was also a part of the Under 20 national contingent that toured the ASIAD in the year 2015. The most senior individual in the team, Rahul will be looking to give leadership to his fresh set of forwards, and look at controlling the game from the forefront.

Meanwhile, Royal College Captain Gunadheera said that while it is an honour and a privilege to lead the Tuskers to victory, they still have one more obstacle to overcome in order to retain the Shield.

“The 1st leg was indeed a victory, but we must not get ahead of ourselves. I know our pack is strong and we can indeed retain the Shield for our Alma Mater. I am confident that with my team’s enthusiasm and the dedication and support from the coaches, we can retain the Shield.”

Gunadheera was an integral part of the Royal front row when he was playing as prop forward earlier, but he has since then graduated to a more responsible role in the third row. This will be a real test as well as a challenge for the skipper, as he would look to replicate the role of Warnakulasooriya and push Royal over the white line.

The Strength Behind The Talent

Former Irish lock forward Eric Miller served a second term as coach for the Lions until he was relieved from all coaching duties with effect from Saturday (May 7). Trinity College alumni Sean Wijesinghe, who was acting as a consultant for the team with Saliya Kumara, was made interim head coach for the rest of the season. This move came following Trinity’s loss to Royal at the 1st leg at Colombo.

Issuing an official communiqué, the Trinity College Principal Andrew Fowler-Watt applauded the efforts of the former Irish national in his efforts to uphold the Trinity Glory and noted that both Sean Wijesinghe and Saliya Kumara will fill the shoes of Miller.

Meanwhile, veteran coach Sanath Martis will continue his stint at Reid Avenue, training the Royalists to a victory. Over the past year, he has been able to mentor a match-winning outfit to become a league title-winning one. Former Royal College vice captain and National skipper Dushanth Lewke is assisting Martis this season.