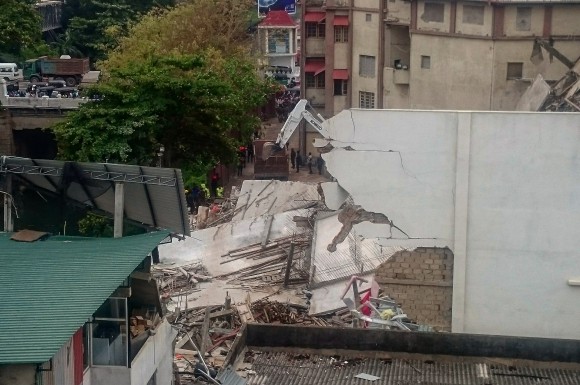 Building Collapse In Wellawatte: What You Need To Know

At little past eleven a.m. yesterday (May 18), disaster struck Wellawatta, shattering the peace of an otherwise uneventful morning. The Excellency, a popular banquet hall on the bank of the old Dutch canal on Charlemont Road, came crashing down without warning, leaving only the façade intact. The top three floors of the partially complete seven-storeyed building were still under construction at the time of the collapse. Among those trapped under the avalanche were construction workers on the site and employees working in the lower storeys. Within minutes of the collapse, the police and paramedics arrived on the scene, with rescue workers from the armed forces, navy, and fire brigade hard on their heels.

Speaking to Roar about the scene of the collapse, an eyewitness noted, “The building caved in like a pack of cards in a matter of seconds, with a huge rushing sound. The steel reinforced concrete on the higher floors tore apart and crumpled first, followed by the roof of the banquet hall. There was a cloud of dust that obscured everything following the collapse. I could hear the yells of people as they were being engulfed by the avalanche. The floors of the neighbouring buildings shook at the impact of the crash. Just seconds before the collapse, I saw construction workers walking about on the higher floors.”

Rescue workers at the site of the disaster.

According to a police officer at the site of the collapse, 45 employees had signed in to work that morning. However, survivors said that there were far more than 45 people inside the building during the collapse. By 6:00 p.m. in the evening, 28 of those trapped within the superficial rubble had been rescued, and transported to the Colombo South Teaching Hospital and the National Hospital of Sri Lanka with injuries, both minor and major. Heavy rains and gales impeded rescue efforts, which continued after dark in order to excavate those who were trapped under rubble in the main office located in the basement of the building. It was 7:30 p.m. when rescue workers managed to drill through to the basement and extricate those stuck inside.

While a few survivors emerged unscathed, assisted by firemen and the army, witnesses say that one of them was borne away on a stretcher with lethal injuries. Speaking to Roar about the casualties, the Deputy Director of the Disaster Management Centre, Pradeep Kodippili, confirmed that rescue missions are still going on and the final count of those injured and dead would be released today (May 19). Much of the collapsed building is still inaccessible due to large chunks of fallen concrete from the upper floors, making it difficult for rescue workers to reach those buried under the rubble in these areas.

Authorities on the ground had to divert traffic to allow room for rescue efforts.

Residents of the immediately adjacent homes were evacuated soon after the collapse, and traffic was diverted from the area to make room for ambulances and fire engines. Apart from a few minor damages, the crash appeared not to have significantly affected neighbouring buildings, including the Savoy cinema, which flanks the site of disaster. However, there is still a threat of the rest of the building collapsing and causing damage to the homes nearby, according to law enforcement officials on the site.

The incident is believed to have been an accident. According to locals, the cause for the collapse may have been an inadequate foundation and a lack of adherence to safe building regulations. “It was built literally on the edge of the canal’s bank,” a resident told Roar, “This could have been a contributing factor in the collapse.” Rescue operations are still underway at the site, and cranes are currently being used to clear away the rubble entombing the central area.

A technical inquiry into the cause of the collapse is taking place this afternoon.