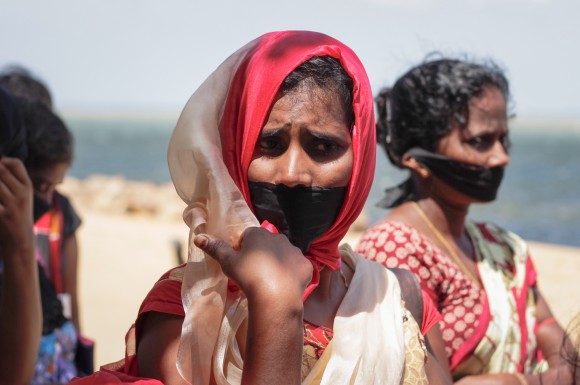 Reporting from Kattankudy and Puttalam

The Night of Destiny—this is what Muslims call the 27th night of the holy month of Ramadan. It is said to mark when the Prophet Muhammad received the first verses of the Quran—the Islamic Holy Book.

It was on such a night, in the year 2000, that Dr. M. S. M. Jabir—a Judicial Medical Officer in Kattankudy—was given the grim task of autopsying the body of a young woman. The mother of a month-old baby, she had been pinned against a wall by her husband, who then struck her with a kerosene lamp.

In quiet horror, Dr. Jabir recounts what happened when his assistant began to pull aside the chest flap of the deceased mother. “Her insides were burned black, but the body was still lactating for the child. So as the chest flap was moved, she began to eject milk all over my apron.”

“As much as I’ve tried, I can’t ever forget that day.”

The brother and mother of Thameem Fatheema Shamila have been fighting to ensure the prosecution of her murderer, and to gain custody of her seven-month-old son.

Dr. Jabir is now the Superintendent of Kattankudy Base Hospital, and oversees its fledgeling Gender-Based Violence Desk. His tale is but a brief glimpse into a darker world of domestic violence, and specifically burnings, that go largely unreported in the mainstream media.

Last month, an image of a girl from Puttalam, bandaged from head to toe, burned and disfigured, went viral on social media. Eighteen-year-old Thameem Fatheema Shamila, mother to a seven-month-old child, had been tied to a chair, doused in kerosene, and set alight by her husband Mohammed Imran.

Shamila had reached out to Puttalam-based activist Juweriya Mohideen five months prior, in January. In search of counselling, the young girl had told of how she had an affair with Imran at the age of 16, was coerced into marriage at the Nallanthaluwa Mosque in Puttalam, and was later physically abused.

Under the Muslim Marriage and Divorce Act (MMDA) of 1951, the fact that Shamila was under 18, that Imran already had two wives that she didn’t know of, and that her consent to marriage was never given, was and is immaterial.

Mohideen had promised Shamila that she would help file a divorce case at the Quazi courts. In the meantime, she suggested Shamila file a case for abuse at the local Police station. Mohideen never heard from Shamila again, until her burned body was admitted to hospital.

Puttalam Police had allegedly listened to Shamila’s complaints and then made moves to play intermediary, and reconcile the couple. But the abuse continued, and eventually, culminated in Shamila’s brutal murder at the hands of her husband Imran.

Shreen Abdul Saroor, a women’s rights activist and member of the Women’s Action Network, says, “Police have a responsibility to protect victims from abusers, not reconcile them. The moment a domestic dispute escalates to violence, you can’t negotiate.”

“The fact that Police did not act stems from a patriarchal notion that the violence women face at home is a private matter—not a criminal one,” says Saroor.

A Pattern In Flames

Women wait for their appointments at Kattankudy Base hospital. From Puttalam to Kattankudy, activists have been documenting the perceived rise of burnings of Muslim women.

“It looks like burnings are becoming a pattern,” says Hasanah Cegu Isadeen, activist and co-author of Unequal Citizens—a critical report on Muslim Personal Law and the marginalisation of Muslim women and girls by the Sri Lankan state.

“The burnings are increasing, and they are connected to the war, to displacement, to the struggling economy, and the decline of education.” It’s not an excuse, but there is a context to why violence against women emerges and repeats itself, says Isadeen.

At the other end of the island, in Kattankudy, there are similar stories to be found. Kattankudy-based activist Aneesa Firthous recounts an incident where a girl, married at the age of 14, and mother to six children, was burned with kerosene after her husband came home drunk one night, and was dissatisfied with her cooking.

While the scourge of domestic violence affects women island-wide—regardless of class, caste, religion and ethnicity—the manifestation of such violence can often be culturally specific. In the case of the Sri Lankan Muslim community, burning is an especially symbolic act, says Saroor.

In Islam, the respectful treatment of bodies, even in death, is paramount. Cremation is strictly prohibited, and tantamount to mutilation of a corpse. “The worst possible thing you can do to any human being is to burn them,” says Saroor.

“I know of one case in Mullaitivu, where a woman poured kerosene on herself and threatened to commit suicide if her husband didn’t stop torturing her,” Saroor recalls.

“He simply lit a match”.

On May 29, Muslim women from Puttalam, along with civil society from across the island, marched to demand justice for Shamila.

The connection between domestic violence and the MMDA may not be immediately clear. But the legislation, along with the current structure of the Quazi courts, creates a power imbalance, and a context in which women are left vulnerable to violence and exploitation.

In the case of Sharmila, she was a victim of child marriage and unregulated polygamy—both sanctioned by the MMDA. Activists on the ground say that these two contexts alone can be a fatal breeding ground for violence.

Girls married off before the age of 18 are neither physically or mentally mature, argues Firthous. “They know nothing about sex, raising children, or maintaining a house or family. This inevitably leads to conflict with older grooms, and in many cases, physical violence.”

Polygamy, too, can lead to conflict. “In many cases, women do not know of the husband’s other wives until after the marriage. When they start asking questions, that’s when the beatings start,” says Saroor.

The movement to reform Muslim Personal Law, and the MMDA, has slowly gained traction, both at the grassroots, in Muslim-majority areas like Kattankudy and Puttalam, as well as in centres of power like Colombo and Geneva. Yet, palpable change is still far from the horizon.

“The basic problem we face is that the Muslim male leadership have no idea of the ground realities,” says Firthous. “Not once have they sat with a woman to talk about her problems, and the abuse and victimisation she faces.”

Editor’s note: The article previously stated that Shamila was made to marry at the Grand Mosque in Puttalam. This has been corrected to the Nallanthaluwa Mosque. We apologise for the error.