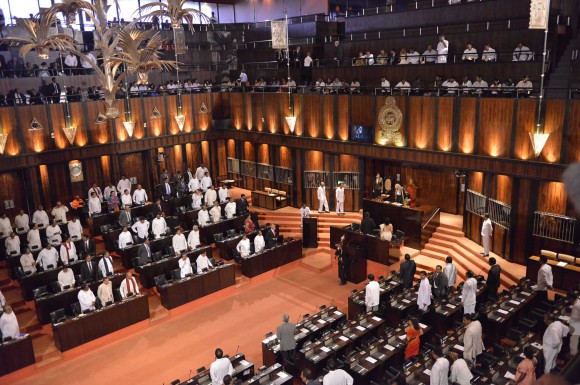 Following weeks of speculation, the Yahapalana Cabinet will finally be reshuffled this Monday (May 22), with two key and at times controversial UNP Ministers trading places as a result.

Finance Minister Ravi Karunanayake will reportedly be appointed as Minister of Foreign Affairs, while incumbent Foreign Minister Mangala Samaraweera will take his place as Minister of Finance, in addition to being handed the Media portfolio which has so far been under the purview of Minister Gayantha Karunatilleke (who is expected to take charge of Public Administration come Monday).

That this development comes in the wake of repeated requests made by the UNP leadership to President Maithripala Sirisena to not change any of the portfolios assigned to the UNP is either an indication of the two constituent parties of the National Unity Government finally resolving their differences, or a sign of more trouble to come, depending on how one looks at it. The 19th amendment to the constitution has made it mandatory for the President to consult the Prime Minister when appointing cabinet ministers, and as recently as Thursday (May 18), UNP Leader and Prime Minister Ranil Wickremesinghe was expressing his party’s reluctance to change things up.

The long-rumoured cabinet is scheduled to take place on Monday, May 20. Image courtesy Asian Tribune

President Sirisena had promised to reshuffle his Cabinet before Vesak Day, and the UNP side of the Government had been dragging its feet on the matter since at least April, stubbornly refusing to budge.

Regardless, Sirisena, as the leader of the Unity Government, had been trying desperately to make the reshuffle happen, with the UN Vesak Day as a self-imposed deadline for the task. Vesak came and went and his deck of cards remained decidedly unshuffled, with ministers from both sides making contradictory statements to the media. Spokesmen for the UNP were particularly vocal about their displeasure at what they called an attempt to fulfill the aspirations of those who had joined the government after being defeated at the elections—an obvious dig at the SLFP members who had sided with Former President Mahinda Rajapaksa in the run up to the 2015 polls. At least one UNP MP threatened to take “stern action” if the proposed reshuffle put the government off track.

Just yesterday, UPFA General Secretary Mahinda Amaraweera warned that the SLFP would reconsider its presence in the Yahapalana Government if the promised reshuffle did not take place.

“A Cabinet reshuffle is a must. It will be done by President Maithripala Sirisena in consultation with Prime Minister Ranil Wickremesinghe. The SLFP is keen to have it carried out as early as possible because all SLFP members, party supporters and the public are expecting it,” he was quoted as saying.

While the SLFP is firmly committed to the cause, the UNP had been wavering on its position, much to the chagrin of the President. Two UNP ministers, in particular, had figured prominently in discussions the President held with the SLFP side of the Government, reportedly over their alleged mishandling of matters pertaining to finance and foreign policy. Some of the SLFP ministers, it was reported, even threatened to sit on the opposition benches as “independent” MPs come August, when the two-year memorandum of understanding between the UNP and the SLFP is up for review.

President Sirisena had vowed to reshuffle his Cabinet before Vesak but differences of opinion got in the way.
Image courtesy Indigo/Getty Images

At his meeting with the SLFP, the President had listened patiently as minister after minister complained that their two green colleagues mentioned above had been taking unilateral decisions at their “own whim and fancy”—the latter especially without consulting the Head of State. The SLFP ministers reportedly listed out the two prominent UNPers’ alleged transgressions, after which President Sirisena promised to address their concerns.

At a separate meeting held with two UNP office-bearers at Sirisena’s private residence, the President was asked to hold the Cabinet reshuffle until Wickremesinghe had returned from his official visit to China. An angry Sirisena, as reported in the Sunday Times last week, used some choice language to convey his displeasure.

Finance Minister Ravi Karunanayake, meanwhile, took matters into his own hands, lashing out at the SLFP ministers at the weekly cabinet meeting, questioning their right to “clamour for change in portfolios” or criticise the government when they worked hard to defeat the Ranil-Maithree coalition in the presidential and parliamentary elections of 2015. According to the Sunday Times report, Sirisena was to remind Karunanayake that the SLFP was with the government for a reason. “You (the UNP) did not get a clear majority. You wanted to form a National Government. Don’t blame the SLFP. They are saying we should pull out of the Government. I am managing with great difficulty,” the weekly newspaper quoted him as saying.

Sirisena’s troubles are about to be over, however, at least for the time being, as after weeks of uncertainty, it looks as though the much-hyped reshuffle will finally take place on Monday. Tensions between the two parties are expected to ease up somewhat as a result; although, realistically, anything is possible.

Nevertheless, no matter what the outcome is, it is hard to believe that with barely three years left to go for the next round of national elections, whatever changes made to the portfolios will make a drastic impact on the fortunes of the Yahalapala Government. Its popularity is eroding at a staggering rate, to put it mildly, and if there is no real progress made in delivering key promises, it’s safe to say that, reshuffle or not, the electoral water it currently finds itself in is only going to get hotter.