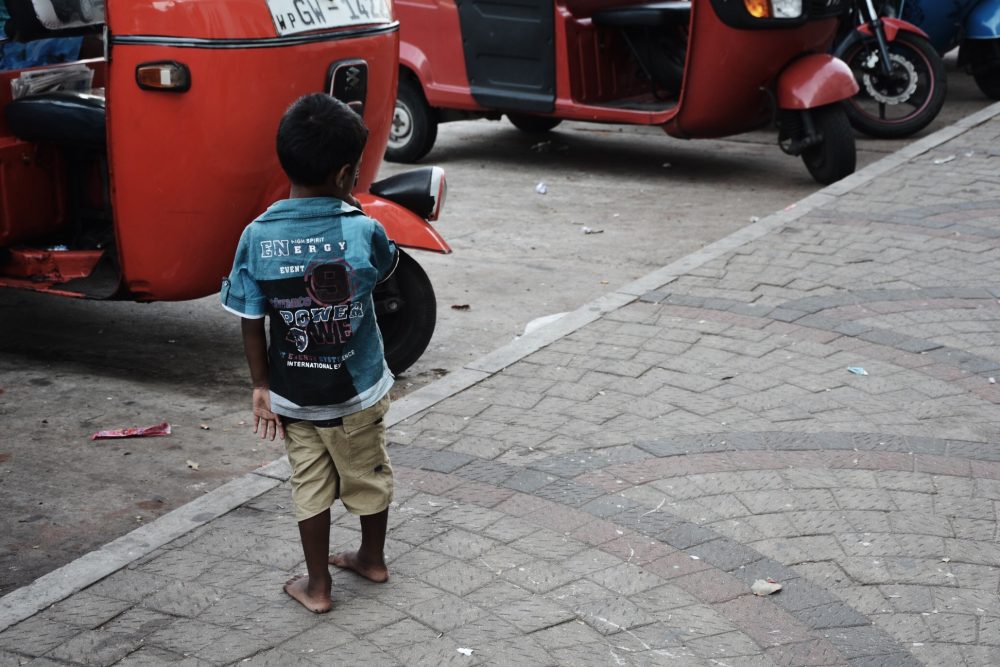 The children of the streets, often offhandedly referred to as “beggar children”, are usually considered a nuisance by commuters. Guilt at seeing a child beg sometimes results in a few coins for the children, but for the most part, beyond surface, cursory interactions with them, most of us are unaware of the lives they lead or the stories behind their dusty, pleading faces.

Beyond an inconvenience that can be dealt with with a few rupees, we don’t often pause to think about basics like where they live, or whether they go to school and how they ended up on the streets. Yet, blending into the background of industry and development, these children are living reminders of how certain branches of our society are completely overlooked.

According to UNICEF, a street child is someone under the age of 18, for whom the street, including unoccupied dwellings, have become home and/or their source of livelihood, and who are inadequately protected or supervised.

A street child in Mumbai, India. Sri Lanka’s street children problem is nowhere near as severe, but is reflective of a number of other social concerns. Image courtesy AP

Dineth* was one such child, who spent his childhood sleeping at railway stations, bus stops, and on park benches. What’s worse is that he was used as a ‘mule’ ‒ an unsuspecting individual, who could act as a go-between drug dealers and their customers.

“Madam, please don’t use my name,” was how he started his story.

“I can’t remember how old I was when my mother left me on the stairs of an orphanage and told me to wait for her. The madam who ran the orphanage told me I was around four or five years old at the time. They took me in and fed me and bathed me. For several weeks, I would go outside and sit on the stairs waiting for my mother to keep her promise but she never came back for me. I stopped when the older boys started making fun of me,” he said, recounting the early days of his life.

Dineth was around seven years old when he ran away from the orphanage and became a child of the streets.

“I couldn’t stay at the orphanage. The madam did awful things to the boys there, and when she called me to her office one day to ‘punish me for my own good’ I knew I had to run away. I got away with a few beatings that night. The very next morning, I stole money from the madam’s purse and took several buses to get as far away as possible. After travelling the entire day, I slept on a park bench at Viharamahadevi, until a policeman beat me with a stick and told me to leave.”

Begging On The Streets

Children from the streets aren’t always homeless, and are often used for more than just begging. Image credit: Nolan Peers/Flickr

“A couple of days later, I was walking down one street, when a well-dressed lady gave me my first five rupee coin. That was when I decided I could beg for a living, because the money I stole was not much, and I had spent it on bus rides and a murukku packet.”

Begging in the streets of Colombo, as Dineth soon learned, is in itself a different method of industry. The young boy was not allowed to sit or sleep in several places because they ‘belonged’ to another beggar.

“Once, a man on a wheelchair came up to me and told me to find my own place to beg. He pointed out a stretch of boutiques and told me that entire stretch was his ‘domain’ and asked me to leave immediately,” recalled Dineth.

In 2009, several raids were carried out with the aim of identifying street children and sending them for rehabilitation or to orphanages. At times like this, street children are treated almost as non-entities at the mercy of the authorities. Dineth was among these numbers.

“The police arrested me, and asked me where my parents were. I said I don’t know. They peppered me with questions I had no answers to. Later on I realised that I was not the only child who was arrested by the police, nor was I the only one who was an orphan and homeless. There were at least ten to fifteen of us, and I heard whispers that we were being taken to an orphanage. I waited for a chance to escape, and when they were ushering us to the police station, I walked away from the group.”

Entering The World Of Drug Dealing

The word ‘rehabilitation’ was nowhere in Dineth’s vocabulary. The street ‒ ironically ‒ was the only place where he felt safe and at home, and he was hardly the only child to gravitate back to the streets. That was when Dineth met a caretaker ‒ Sumith*.

“Sumith saw me sitting under a small shop that stank of urine and he approached me. He asked if I would like a roof over my head and different clothes to wear. In return I had to do as he asked. It was a fair deal, and I agreed.”

Dineth’s first task was to deliver a parcel to a stranger and collect the money.

“All I had to do was wait for the person to approach me. It was fairly easy and I did it. Soon enough, I was given more responsible tasks. In return, Sumith took care of me, clothed me, fed me, and kept a roof over my head. He was nice to me.”

Little did Dineth know he was dealing drugs. However, after Sumith was arrested, Dineth once again lost a home.

“I was around fourteen years old then, and I knew how to survive on my own.”

In response to a question regarding his education, Dineth, now in his early twenties, said he can read basic Sinhala words and was well trained in picking pockets.

“There was a small family living in the Mattakkuliya slums with two daughters and a son around my age. He was one of Sumith’s friends too. He told me I can stay at his place. I have been with them ever since,” said Dineth.

At one of Colombo’s busiest intersections, a small family of beggars hangs out. The number of children fluctuate from three to five and they’re well trained in the art of begging. They would follow you, begging for money. Should you give them money, they would immediately hand it over to their parents. However, if you buy them a packet of biscuits or a chocolate, they would happily accept the treat too. Image credit: Roar.lk/Minaali Haputantri

The children of Colombo’s streets are not always homeless in the strict definition of the word. Most children have a place to live, and even families to go home to. The slums that are crammed in between several streets are home to these children.

However, although most of these children have a place to live, they grow up among ills such as prostitution, drug abuse, congested living, and sometimes even violence as a part of their day to day lives.

Dineth’s story is just one of the many of Colombo’s street children. Every year, the National Child Protection Authority (NCPA) makes elaborate plans to take “necessary action” about the ever increasing number of street children, yet it would seem that despite their attempts, there is no real solution at hand.

On C.W.W Kannangara Mawatha, in front of Odel, next to the Dewatagaha Jumma Masjid and Shrine, lives a small family of beggars. The number of children fluctuate from three to five and they’re well-trained in the art of begging. They would follow you as far as the Town Hall area, begging for money.

Should you give them money, they would immediately hand it over to their parents. However, if you buy them a packet of biscuits or a chocolate, they would happily accept the treat too.

What the Authorities Say

According to the NCPA’s Media Officer, Ediriweera Gunasekara, the NCPA has several plans underway for the betterment of the street children, which include looking into unsavoury activities that street children are likely to get caught up in. It should, however, be noted that the NCPA has a wide array of issues to look into, including helping child rape victims, which often results in divided focus.

The NCPA has also requested the public to either call 1929 or notify the nearest police station in instances where street children are either being used in illicit drug dealings or subjected to other atrocities like theft or prostitution.

It is, however, sad to see that rather than treat this as a humanitarian issue, street children are often regarded as a problem that needs to be “removed.” The fact that they are a byproduct of several social issues combined is ignored. The usual solution ‒ to move these children into orphanages or state-run ‘homes’ ‒ is based on the argument that this is for their own benefit, yet the truth is that many children end up back on the streets.

Beyond institutionalisation, this “solution” fails to help rehabilitate the children and adapt to a life off the streets. Dineth’s story is just one among many. The NCPA’s primary focus is on the prevention of abuse against children in general; how much consideration is given to the abuse street children go through is unclear.

There are also other organisations such as the Sri Lanka Child Protection Foundation that has plans to help street children. However, if we are to look to a future where children are kept off the streets, we need more comprehensive policy planning in place. As we have learnt, the sight of children on the streets is more often than not illustrative of a series of other social concerns.

*Names have been changed to protect identities.