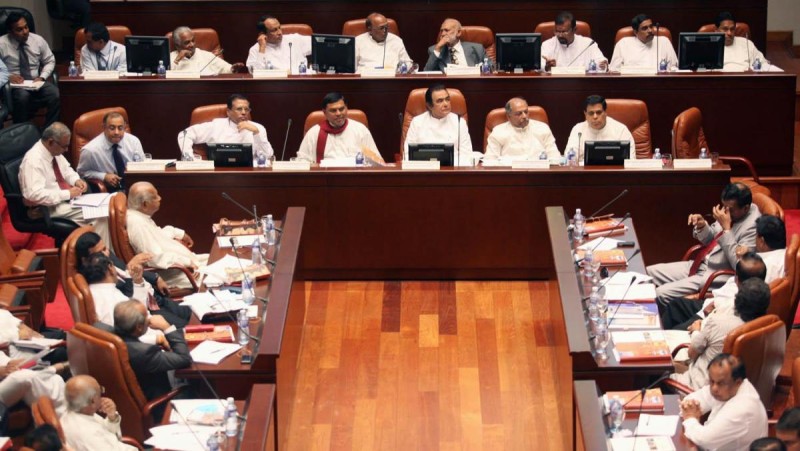 Code Of Ethical Conduct For MPs: Yea Or Nay?

No matter where your political allegiances may lie, one thing all Sri Lankans can agree on is that their representatives in Parliament could do with a lesson or two in good behaviour. Numerous incidents involving Members of Parliament (MPs) conducting themselves in a manner that, to put it mildly, isn’t befitting a public official have, time and again, amply demonstrated the need for a strong Code of Ethical Conduct. One that seeks to instill the kind of discipline you would otherwise expect from a man (or woman) of the people. At long last, there is talk of such a code of conduct finally being established in the Sri Lankan legislature, and this time, it looks as though it’s being seriously considered. Roar sat down with Analyst and Head of Politics at Verité Research Janeen Fernando for a quick chat on what to expect.

Not the kind of behaviour you’d expect from the people running a country. But yes, this is a scene from the Sri Lankan Parliament, back in 2011. Image Credit: AFP/GETTY IMAGES

Though it’s very much being discussed, at present there is no official draft version, and what will be included in the final document is anyone’s guess; but according to Fernando, the following can be part of it:

Some aspects such as respect for human rights included in the international common ethical principles, says Fernando, cannot be meaningfully codified into law but can be voluntarily endorsed or encouraged.

“Some of these can also be achieved through other legal instruments for example the RTI or specific campaign finance laws,” he said.

Sri Lanka is signatory to the Open Government Partnership (OGP). Does this mean the Government is obligated to introduce a Code of Ethics based on the OGP’s Common Ethical Principles for MPs framework? Or can we come up with our own (that is to say, a more homegrown) solution?

“Sri Lanka will have autonomy over how the common ethical principles are formulated; the Code is broad and only represents an international agreement on principles. Some sections are mere guidelines for ethical conduct that are self-regulating rather than codified rules. However, the common ethical principles represent a sound basis for creating a codified set of rules and it would be in the interests of the Sri Lankan public to use this globally mandated framework when constructing our own Code,” explained Fernando.

Of greater concern than the source of the Code, he warned, is the absence of one, and the lack of progress towards it. The Yahapalana Government in its election manifesto has promised the Sri Lankan public the establishment of an Ethical Code of Conduct for MPs by February 2. Last year.

If implemented, could this Code of Ethics be law? And what role will the upcoming constitutional reforms play?

Turns out, a number of elements can be codified within the existing legal framework. According to Fernando, provisions specific to intra-parliamentary affairs can also be done through amending the standing orders of Parliament.

Many argue that a Code of Ethical Conduct for MPs is very much needed, and is in fact long overdue. Image Credit: netivist.org/G_marius

And the Code doesn’t have to be limited to parliamentarians either. Provincial and urban council members can also play by the same rules.

“There is no reason to limit the Code to parliamentarians. Some aspects of it may not be applicable (e.g. conflicts of interest in lawmaking) especially to local councillors. But the broader issues can apply to all,” he said.

What do you think? Do our MPs need a strict code of conduct? If so, what would you include in it? Let us know in the comments.