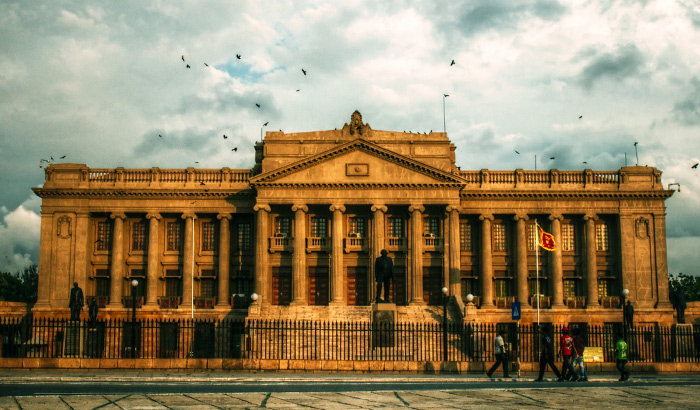 This is part of an ongoing series of articles by Roar breaking down the functions and constituencies of the various institutions of the Democratic Socialist Republic of Sri Lanka. This week, we shall examine the structure of power distribution in our island nation.

A new constitution is on the cards, but until (indeed, if ever) it becomes law, Sri Lanka is at present a semi-presidential representative democratic republic ‒ with some socialist characteristics (hence the ‘socialist’ in the country’s full name) with a multiparty system in place.

Executive power is vested in a democratically elected government, with power being shared by the President of Sri Lanka and a Cabinet of Ministers headed by the Prime Minister. As of the 19th Amendment to the Constitution, a President is elected directly by the people for a term of no more than five years, at the end of which (or before, if he or she so desires) elections must be called. The sitting president may contest for one extra term but no more (the controversial 18th Amendment was an attempt to change this). The President is the ‘head of government’ as well as the commander in chief of the armed forces.

J. R. Jayawardene being sworn in as the country’s first Executive President in 1978.

The office of the president was established in 1972, but the position remained largely nominal until the advent of Junius Richard Jayawardene as the country’s first ever Executive President in 1978. In the wake of the extremely unpopular economic [mis]management by the SLFP-led government of Sirimavo Bandaranaike, the United National Party under the leadership of Jayawardene won the 1977 general elections in a historic landslide with a 5/6th majority in Parliament. Writing a new constitution the very next year, Jayawardene appointed himself Executive President with unprecedentedly sweeping powers, effectively making the highest political office of the land all but a monarchy ‒ one that every president since has failed to abolish in its entirety. It vested in him so much power that he famously quipped that the only thing an executive president couldn’t do was turn a man into a woman or vice versa.

The executive president has, as of the 19th Amendment, the power to (among other things) declare war (and peace) and summon, prorogue, and dissolve Parliament ‒ but not until four years and six months have passed since the first sitting, unless Parliament, with a two-thirds majority, requests the president to do so (before 19A, the President could basically dissolve parliament at his or her whim ‒ like how Chandrika Bandaranaike Kumaratunga did back in 2004). The president cannot be taken to court while in power for “anything done or omitted to be done in either his official or private capacity.”

The President, as per provisions in 19A, shall be responsible to Parliament for the due exercise, performance, and discharge of his powers, duties, and functions under the Constitution and any written law, “including the law for the time being relating to public security.”

The President, as head of government, must appoint a Cabinet of Ministers headed by his deputy, the Prime Minister, who is usually the leader of the party that holds a parliamentary majority. The 19th Amendment has beefed up the office of the Premier somewhat, giving it more teeth in areas relating to the appointment of ministers. The President is now required by law to consult the PM when appointing or removing any Cabinet, Deputy, or Non-Cabinet Minister. The President may, however, at any time change the assignment of subjects and functions of both Cabinet and Non-Cabinet Ministers. Also, though there were proposals to make the Prime Minister the Head of the Cabinet through the 19A, potentially allowing him or her to determine the size of the Cabinet, the Supreme Court ruled that such a far-reaching amendment would require a referendum and as thus has yet to be adopted.

The lawmaking body of the country ‒ also known as the Parliament ‒ is a 225-member unicameral legislature elected by popular vote for a five-year term. Modelled after the British Parliament, it has the power to draft and pass all laws. Of the 225 members, 196 are elected under the proportional representation system from 22 multi-member electoral districts, and the remaining 29 get picked from the National List allocated to each party, depending on how well it does at the polls. Electoral reforms have been on the horizon for a while now, and it is likely that significant changes will be made to this system if and when the proposed new Constitution is adopted.

Presided by the Speaker, Parliament works according to a framework of rules called Standing Orders that regulates procedure, debate, and conduct of members. The current Standing Orders were formulated in 1978 and the House may amend them from time to time.

Parliament is responsible for passing government bills that must be subject to three separate readings at the end of which they may be endorsed by the Speaker. It is only after a bill has gone through these rigorous stages that it becomes an Act. One of the ‒ if not the ‒ most important government bill is the Appropriation Bill, also known as the Annual Budget, at the presentation of which the Finance Minister declares the Government’s economic policy for the year.

All public finances are, by law, under the total control of Parliament.

Below the Executive and Legislative are the administrative divisions in the form of the civil service and the provincial councils.

Sri Lanka is divided into 25 districts, each headed by a District Secretary or Government Agent appointed by the Government. Within a district can be found anywhere between 5 and 16 divisional secretariats ‒ and Grama Sewakas and Samurdhi officials below that.

Provincial councils were a “gift” to Sri Lanka from her neighbour as part of the controversial Indo-Lanka Accord signed in 1987 by the then UNP Government as a [poorly thought out] solution to the escalating ethnic tensions in the country at the time, by way of the 13th Amendment to the Constitution.

The idea was to ease rising Tamil militancy by devolving some level of authority to the provinces. As a result of the Accord, the Northern and Eastern provinces were merged into a single administrative unit and, thus, a temporary “North Eastern” Province was established. This remained the status quo for a better part of two decades, with successive Presidents extending the validity period of the council year after year, until, in October 2006, the JVP successfully petitioned the Supreme Court to declare the merger illegal. The North Eastern Province was formally split on January 1, 2007, much to the relief of nationalist forces. The newly created Eastern and Northern Provinces were run directly from Colombo, until elections were held for the first time for the two councils in 2008 and 2013 respectively.

At present, there are nine provincial councils operating in Sri Lanka, each headed by a Chief Minister that oversees a board of ministers. A Governor is appointed by the President for each council as a representative of the Head of State. The Governor serves some executive functions and has the authority to prorogue and dissolve the council that comes under his purview.

Provincial councils have legislative power over areas of everyday administration such as agriculture, education, health, roads, and social services. Technically, the provinces are entitled to police and land powers as per the Constitution, but successive Central Governments have so far refused to devolve these powers, for a variety of reasons.

Local authorities are tasked with looking after roads, sanitation, garbage, libraries, housing, recreational facilities and other such unglamorous but crucial services. Local government elections have been overdue for some time now.

The Supreme Court of Sri Lanka, which is vested with ultimate appellate jurisdiction. Image courtesy unaids.org

Totally independent (at least in theory) of the Executive and Legislative branches of power, the country’s Judiciary is the last refuge for those seeking justice in Sri Lanka. Consisting of the Supreme Court, the Court of Appeal, the High Court and multiple District, Magistrate and Primary Courts, the country’s judiciary is a complicated, well-oiled machine that a single article cannot ‒ pardon the pun ‒ do justice to, so we shall attempt to deconstruct the workings of the highest court of the land, the Supreme Court.

Subject to the provisions as spelt out by the Constitution, the Supreme Court of Sri Lanka has what is known as ultimate appellate jurisdiction ‒ that’s legal jargon for the power to review and change the outcome of decisions made by lower courts ‒ in constitutional matters.

Dating back to 1801, the Supreme Court is one of the oldest existing institutions in the country. Today, the court is presided by the Chief Justice and between six and 10 other judges, appointed by the Constitutional Council on the recommendation of the President of Sri Lanka.

The Supreme Court has the following powers, according to the Constitution:

That’s it for this week. If there are any institutions or functions of the Sri Lankan Government that you would like us to tackle in our next edition, please do let us know in the comments.