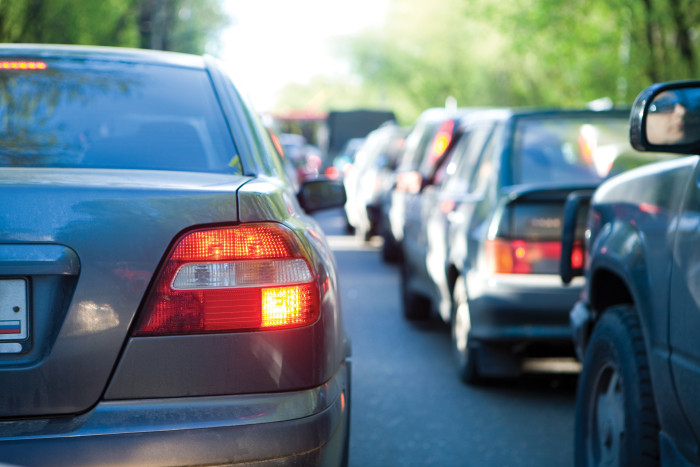 On average, Sri Lanka imports 1,800 vehicles on a daily basis. During the first nine months of 2015, a total of  489,000 vehicles were imported. To add to this, approximately 100,000 vehicles enter Colombo city daily, and while traffic has been the most pressing concern for many, the real question is, how badly has this impacted air quality in the city?

For those accustomed to taking tuk-tuks to get around, next to harrowing near-death experiences, the most memorable impression of the ride would involve a blast of exhaust fumes greeting your lungs. In areas of the city where there aren’t as many trees as there should be (hint: Havelock Town), travelling can be excruciating. What with the rise in the number of vehicles on the roads and the deterioration of the quality of public transport, the real victim here is the environment (and, of course, your poor lungs).

While we aren’t even half as bad as China (no red alerts or bottles of Rocky Mountain air required here!) or even New Delhi, it should be a cause for concern, especially considering the narrow concentration of these vehicles.

Where Do We Stand In Terms of Ambient Air Quality?

Turns out, despite doomsday predictions, Sri Lanka is holding up reasonably well. According to the Central Environmental Authority (CEA), Sri Lanka is at Target No.2, going by the guidelines stipulated by the WHO. This means that we’re not as bad as we think we are – but we could definitely do with some improvement (the improvement being reaching Target No.3).

Using the Nugegoda area as a representative (and everyone would agree that Nugegoda is a microcosm of what we imagine hell looks like), the CEA estimates we are well within the pollution parameters. For instance, the particulate matter (PM) 2.5 is between 21 – 29, while the national standard is set at 50. Likewise, the PM 10 is between 23 – 35, while the national standard is at 100. This means that the pollution level in the city of Colombo is, strangely enough, manageable, and the respirable dust particles are more or less within limits.

Additionally, (and this is surprising considering the yearly increase in the number of vehicles on the roads as well as industrial activities) since 1998, the pollution levels in Colombo have seen a drop. In 1998, it was 80 mg per meter cube, but as of 2014, the CEA estimates that the levels have fallen down to 60 mg per meter cube.

How Is That Even Possible?

Turns out, Colombo has the advantage over Kandy all thanks to the location. According to the CEA, the pollution levels in Kandy are worse than anywhere else in Sri Lanka (Kandy: PM 2.5 is 10 – 20 and PM 10 is 37 – 54). The reason Colombo manages is because of its proximity to the sea, resulting in a constant supply of fresh air. “Therefore, if there is an impact on the Colombo environment, it is minimised by the sea,” Chairman of CEA, Professor Lal Mervin Dharmasiri elaborated. Kandy lucks out in this respect, being so far away from the coast.

Is This Still a Cause for Concern?

Well, obviously. It is at this point that the vehicle emission testing comes into play – and some would even say, foul play. There are currently two main bodies issuing certificates for vehicles, which is a mandatory requirement if you are to renew your license.

There are, however, exceptions. According to the CEA, the testing is mandatory for all vehicles except armed forces vehicles – and, rather counterintuitively – CTB buses. “We are currently discussing the possibility of providing the buses these tests free of charge,” the chairman of CEA added.

Speaking to the Department of Motor Traffic (DMT), it was understood that where privately run buses are concerned, the emission tests are mandatory. According to an official at the DMT, “the issue is, although we do the test, the vehicle needs to be maintained and the filters need to be changed. Sometimes, this doesn’t happen.”

CTB buses aren’t the only vehicles exempt from emission testing. According to the DMT, tractors, vehicles manufactured before 1975, and hybrid vehicles are also exempt.

Apart from this, there’s also the question of whether or not these emission centres are operating as they ought to. While the DMT claims that they inspect the centres and will take action when complaints are received, this is yet another aspect that needs strict supervision.

The increase in vehicles, and therefore, increase in air pollution, is a symptom of a bigger problem – our dismal public transport system. The issue is multifarious considering the fact that CTB buses continue to be inefficient, and are also major pollutants which run unchecked. As a result, last year saw a greater increase in vehicle imports – at this point, there are 4.2 million vehicles actively in use, while the total number of registered vehicles is 6 million.

The CEA’s overall strategy where air pollution is concerned is to regulate it in the major cities – cities like Colombo and Kandy are used as a benchmark. Regulating the pollution in these cities, the CEA claims, is a good way to ensure that pollution in other parts of the island is kept under check.

Where actually reducing the level of pollution is concerned, Sri Lanka does have plans – but when you take into account the confusion the recent budget created (concessions for vehicle categories that don’t exist, like Helium and Hydrogen, and an increase in duty for hybrid vehicles), and then tried to amend, it is definitely a cause for concern. In addition, there are other sources of pollution (like industrial pollution) that are equally pressing.

Apart from taking personal initiatives (like ensuring your vehicles are low pollutants or carpooling whenever possible), it is time we collectively push for stringent regulations and stricter enforcement and monitoring.

New Delhi – where vehicles with odd and even license plate numbers are now allowed to run on alternate days, in an attempt to curb pollution. Image Credit: Harish Tyagi/European Pressphoto Agency

Perhaps if we have a more reliable public transport system, we could push for measures like in New Delhi, where just last week the government implemented a system to curb use of private vehicles.

Our air quality may not be causing half the problems that cities in China and India are subjected to, but it doesn’t mean we can afford to take a backseat either.