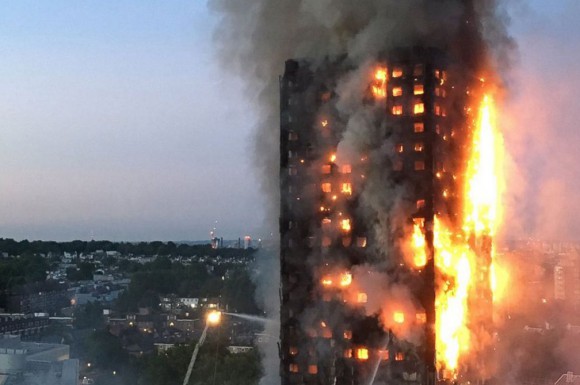 In the aftermath of the London tower block disaster, the Sri Lanka Branch of the Institution of Fire Engineers, a body of leading fire safety experts, has warned that the traffic is so bad in Colombo that the city’s Fire Department cannot meet its seven-minute target for reaching a blaze.

Nalaka Liyanapeli, the Hon. Secretary of the Institution, spoke to Roar following the deadly high-rise fire in London. He called  for increased funding for the Colombo Fire Department so that it would be better able to tackle a fire like the one that devastated the 24-storey Grenfell Tower in the west of the British capital.

As of today (Friday, June 16) at least 17 people are known to have died in the council-owned apartment block, with the death toll expected to rise—there were still “unknown numbers” of bodies in Grenfell Tower, according to London Fire Commissioner Dany Cotton. The exact cause of the fire isn’t yet known. However, the recently installed external cladding is being blamed by some experts for the incredibly rapid spread of the fire, which witnesses said took only 15 minutes to engulf the building.

Police have now launched a criminal inquiry into the Grenfell Tower blaze, as it emerged that cladding panels similar to those likely to have been used on the apartment building have been widely prohibited on tall buildings in the US since 2012.

In a £10 million refurbishment programme, Grenfell Tower was fitted with the zinc cladding, despite plans submitted in 2012 to local authority Kensington and Chelsea described how zinc was “not sufficiently robust“.

Fortunately for high-rise dwellers in Colombo, this type of external panelling is not widely used in Sri Lanka. “We are not so familiar with these panels in Sri Lanka. Most of the construction is with bricks and concrete and we rarely use these panels. Not popular like the UK,” said Liyanapeli.

Despite the different construction methods used in Sri Lanka and the wide use of sprinklers and smoke detectors in modern buildings here, the fire expert admits that there is always a possibility that a fire like the London disaster could happen in Colombo. “High-rise buildings are always a challenge because there is a limit to the fire brigade’s facilities and access points are limited,” he said.

On the whole, he believes the Fire Brigade has adequate equipment, including turntable ladders, hydraulic platforms and breathing gear for firefighters. But funding is a struggle.

“Our local fire authorities… don’t have enough money to buy certain equipment and some of our facilities are a little bit old,” said  Liyanapeli.

“The government should identify the importance of providing necessary resources for the fire brigade. They are totally dependent on the funds provided by the government. In order to give a proper service and respond to emergencies quickly, they should have enough new equipment and facilities and train people. It is a huge cost and the government should provide the funds,” he added.

How soon fire trucks get to the scene of a fire depends heavily on the traffic situation—now a significant concern to Colombo’s Fire Brigade. Image credit: Uthpala Dilhan

Liyanapeli’s major worry is the time it can take for the Fire Brigade to get to the scene of a fire. “We plan to reach any point within Colombo city within seven minutes, but I don’t believe this is possible under the existing traffic situation. It is a huge problem. Even if we use sirens, in certain places, there is no possibility to give way to the fire brigade and ambulances.”

These traffic bottlenecks are only likely to get worse as the number of vehicles in Colombo continue to rise.

Figures from the Sri Lankan Ministry of Transport, show that around 450,000 cars, three-wheelers, motorcycles and vans enter Colombo every day. Add to that almost 30,000 buses a day and it’s no surprise the traffic can be a nightmare, which is only predicted to get worse. It is estimated there will be around 4.4 million daily commuters by 2035, up from the current figure of just under 2 million.