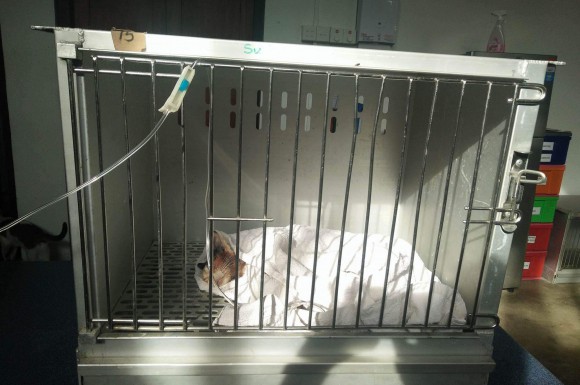 On Saturday (July 15), explosive videos emerged on social media of stray animals being rounded up and drugged on the University of Moratuwa premises, provoking widespread public outcry. Filmed by students at the university on Friday, July 14, the footage showed dogs being injected hypodermically with a substance that rendered some of the animals unconscious and caused extreme reactions in others, making them thrash around in agony.

Upon investigation, animal rights groups discovered that these animals had then been transported off campus to a site owned by the university 20 kilometres away, in Homagama. According to students at the university who spoke to animal rights activists, 23 dogs and several cats had been removed in this manner from the university premises. The incriminating videos were taken down shortly afterward, allegedly due to pressure from university authorities.

Speaking to Roar, animal rights activists Wibodha Ambeygoda and Manoja Weerakkody explained that soon after the initial reports came out, they had rushed to the area where the animals were said to have been transported, to try and see if they could be rescued. On arriving, they learnt from security personnel at the site that on Friday evening, an unidentified truck had arrived, dumped the animals, and decamped almost immediately. The terrified animals had been vomiting blood and displaying signs of pain and distress. The security personnel revealed that they had found ten cats dead in sacks, with ropes and wires constricting their necks. They also informed the activists that some of the surviving dogs had run away. These animals were later found wandering around the site in a disoriented state. Two dogs had died upon arrival and had to be buried along with the cats.

Upon further inquiry, Ambeygoda and Weerakkody had discovered that two of the abandoned cats had survived the ordeal, with one of them, a calico, in critical condition with a severe neck wound. The cats were rescued and transported to the Pet Vet Clinic in Colombo, where they were attended to. The calico succumbed to its injuries on Monday 17. Ambeygoda said that it was later identified by students at the University of Moratuwa as a resident feline that had littered two weeks before.

The cat, which was found in critical condition, died shortly after its rescue. Image credit: Wibodha Ambeygoda

Ambeygoda, who is a part of the Animal Welfare Committee under the Ministry of Provincial Councils and Local Government, told Roar that it is believed that the deceased animals were administered an overdose of ketamine, judging by the symptoms displayed by the injured cat, as well as some of the animals in the original video footage. Ketamine, which is used as an anaesthetic in controlled doses, can be dangerous in higher doses, causing side effects that include pain, vomiting, paralysis, seizures, neurotoxicity, and eventually, death. “We still don’t know if the rest of the animals were given cyanide, arsenic, or a mixture of ketamine with something else,” said Ambeygoda. “Pure ketamine is not usually used on its own. We believe that [the drug] must have been a ketamine mixture.”

The Vice Chancellor of the University of Moratuwa, Professor Ananda Jayawardane, has refused to take responsibility for the incident. He informed Daily News that contractors from the private security company hired by the university, Rakna Arakshaka Lanka, had been in sole charge of the logistics of removing the animals from the premises. He further said that the animals had been a danger to the university students, and that there had been cases of dog bites. Referring to these claims, Ambeygoda said, “If this is true and one suspects that the animals are carrying rabies, there is a protocol that needs to be followed in Sri Lanka, which is to inform the Ministry of Health’s area office. They will come and do the needful. What happened here was completely illegal.” Minister for Local Government and Provincial Council, Faiszer Musthapha, has said that as universities do not fall under his jurisdiction, the methods used to dispose of the animals were not sanctioned by him.

Animal rights abuses are against the law in Sri Lanka. The Prevention of Cruelty to Animals Ordinance in Sri Lanka states that cruelty to animals is punishable by a fine or imprisonment for three to six months. However, this does not seem to have deterred previous incidents of culling stray animals. In fact, according to animal welfare groups, there were eyewitness reports of eight dogs being drugged and removed from the premises of another national higher education institute on Thursday 13, just one day before the incident at the University of Moratuwa. Likewise, in April this year, there was an uproar when over 30 dogs disappeared from the University of Jayewardenepura premises during the Sinhala and Tamil New Year holidays. According to The Sunday Leader, veterinarian Dr. Chamith Nanayakkara said that it was believed that these animals were killed and disposed of by a pest control company, under the directive of university authorities.

“This is the first time they have got caught,” said Ambeygoda, referring to the University of Moratuwa incident. As of now, several animal welfare groups have filed complaints against the University of Moratuwa, and activists are petitioning for action to be taken against the parties responsible for the incident. Animal rights groups are also carrying out feeding programmes for the surviving animals in and around the Homagama area. Minister Faiszer Musthapha has said that he will conduct a probe into the incident, while further police inquiries are also underway, and some of the animal carcasses have been exhumed for investigative purposes.

Animal rights activists met Minister Musthapha on Monday (July 24) at the Ministry of Provincial Council and Local Government to discuss the killing of stray animals. Protesters gathered outside the venue to express their censure to the minister after the meeting. They called for the strengthening of laws against animal cruelty. Musthapha told the crowds that the killing of stray animals is unacceptable, and that the accusations claiming that he condoned these killings are unfounded. He also reiterated that his authority over the matter is limited. Nevertheless, he agreed to cooperate with activists to find a solution to the issue.