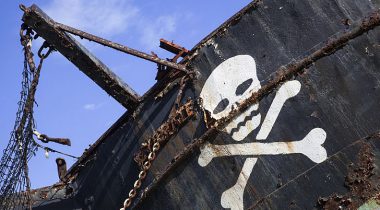 Eight Sri Lankan sailors recently had a close shave with several Somali pirates who captured an oil tanker they were onboard. After being held for ransom for nearly a week, the pirates released the vessel along with the crew, who arrived at their destination safely.

There was a time, however, when pirate encounters rarely ended well.

Piracy is often defined as the act of robbery or criminal violence by ship, typically with the goal of stealing cargo.

The earliest documented instances of piracy were in the 14th century BC from Greece, when the Sea Peoples, a group of ocean raiders hailing from unconfirmed ethnicities (although many believe they were of Eastern European origin), attacked the ships of the Aegean sea and Mediterranean civilisations. They were also famous for raiding Ancient Egyptian ships to loot gold.

Then, of course, there was the Golden Age of Piracy of the early modern period, spanning from the 1650s to the 1730s. Most of us have heard of notorious pirates such as Edward “Blackbeard” Thatch and Charles Vane through works such as Pirates of the Caribbean (sadly, Captain Jack Sparrow was purely fictional). This was the height of plunder and mayhem in the seven seas, until it all ended in 1726.

Afterwards, sea piracy dwindled, but had paved the way for modern day pirates. Surprisingly, Sri Lanka has also been associated with pirates and their misadventures through the years.

Sinbad in the Court of the King of Serendib by Gustave Doré. According to the tale, Sinbad, the heroic pirate of the Arabian Knights, once visited Sri Lanka. Image credit: alamy.com

Although the reality can be very different, fiction has a tendency to romanticise the idea of pirates. Perhaps the most popular and good-natured sailor in the history of fiction, Sinbad was part heroic pirate, and part adventurer. Hailing from the One Thousand and One Nights in its late revisals, The Tales of Sinbad the Sailor relates the stories of a sailor of Middle Eastern origin, who voyages through the seas east of Africa and south of Asia and becomes unwittingly part of fantastic adventures, visiting magical places, and encountering monsters and other bewildering supernatural phenomena.

According to the tales, in his sixth and seventh voyages, Sinbad is shipwrecked ‒ not for the first time ‒ when his ship violently dashes to pieces against the tall cliffs of an unknown island. Sinbad later learns that he has landed on the western coast of Serendib where he eventually meets some locals who take him to the unnamed king of then.

Sinbad is received well by the king, treated with gifts for his stories about the Arabian Caliphate, and is provided the opportunity to return to Baghdad. Sinbad’s story mentions Adam’s Peak which is “conspicuous from a distance of three days, and it containeth many kinds of rubies and other minerals, and spice trees of all sorts. The surface is covered with emery wherewith gems are cut and fashioned; diamonds are in its rivers and pearls in its river valleys.”

Among the gifts given to Sinbad, is a cup carved from a single ruby. Also, Sinbad encounters the legendary Rocs, which feast on elephants right in front of the shocked sailor.

Legendary traveller, Ibn Battuta, was attacked by pirates when returning to the Maldives from Sri Lanka. Image credit: Imre Solt

Ibn Battuta was a medieval Moroccan traveller and scholar and is generally considered one of the greatest travellers of all times ‒ and this island is among the many places on the map of his travels.

Ibn Battuta travelled across South Asia from 1332 to 1347 and documented his travels extensively in his journals ‒ many that have been found and curated. During his the nine months that he lived in the Maldives (where his ship crashed), he visited Sri Lanka on several pilgrimages, including to Adam’s Peak and the Tenavaram Hindu Temple in Matara.

According to the Premodern Travel in World History by Stephen Gosch and Peter Stearns, Ibn Battuta, while returning to the Maldives after touring Sri Lanka, was attacked by pirates of Southern India and Southeast Asia. The pirates stole all the precious jewels he had been given in Sri Lanka during his pilgrimages. Battuta is quoted: “They left nothing on my body except my trousers.”

Returning to modern times, many would recall that Sri Lanka had its own ‘pirates’, not too long ago.

The notorious Sea Tigers (the naval arm of the LTTE separatist rebels) was also known for its acts of sea piracy.

Founded in 1984, the primary objective of the LTTE’s naval unit was to smuggle personnel and equipment between LTTE bases in Tamil Nadu and Jaffna. The Sea Tigers were also accused of hijacking ships and boats, outside Sri Lankan waters. The most noted cases are of the MV Irish Mona, the Malaysian MV Sik Yang and the famous Jordanian vessel MV Farah III.

On August 30, 1995, the Sea Tigers hijacked MV Irish Mona, a ferry transporting 128 passengers from Karaitivu to Trincomalee. The ferry was intercepted by the Sea Tigers after the naval units attacked and sunk two Sri Lankan naval gunboats that came to assist the ferry passengers.

On May 25, 1999, the LTTE hijacked the MV Sik Yang, a 2,818-ton Malaysian cargo ship carrying bagged salt, which was sailing from Tuticorin in India, and used it as a phantom vessel. The fate of its 63-member crew remains unknown.

However, the most famous case is the fate of the MV Farah III. The Jordanian cargo vessel was en route from India to South Africa when it encountered engine failure off the east coast of Sri Lanka in December 2006. The crew immediately sent out a distress call and dropped anchor near Mullaitivu ‒ which was then under LTTE control.

Several weeks later, the members of the Sea Tigers took control of the vessel and forced the crew into smaller boats. They were taken ashore and were later delivered to the Red Cross. The drifting ship eventually ran aground and over time was stripped bare by the LTTE. Today, only the frame of the ship remains, and has become a popular tourist attraction in Mullaitivu.

Even after the war, Sri Lanka remained cautious of potential pirate encounters. The controversial Avant Garde Maritime Security Services (AGMSS), for instance, was a private security company that, together with Rakna Arakshaka Lanka Ltd (RALL), provided maritime security against piracy.

Both AGMSS and RALL ran into trouble a few years ago, however, when news of floating armouries were exposed to the public. Although the initial noise surrounding the issue has died down, occasional updates do sometimes make headlines.

The service venture provided to AGMSS and RALL was repealed in 2015 and handed over to the Sri Lanka Navy, who have reportedly made a profit through security operations.

Today, although peg-legged, eye-patched plunderers aboard foreboding ships exist only in works of fiction, piracy itself isn’t entirely a thing of the past. In fact, occasional news reports do continue to surface of Sri Lankans falling victim to pirates, if not closer to home, then in foreign seas.