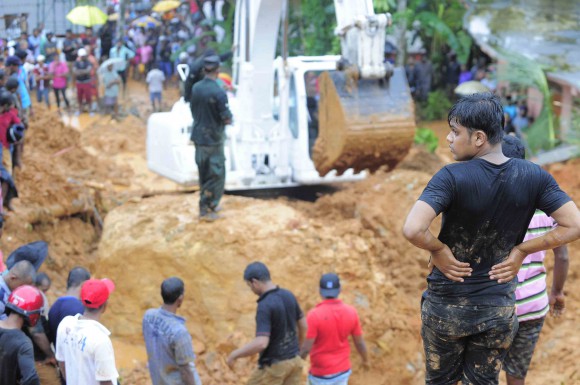 According to the latest situation report by the Disaster Management Centre (May 26, 7:30 p.m.), rains, floods, and landslides across 14 districts have affected around 61,315 people, belonging to 16,759 families. So far, 91 deaths have been confirmed by the DMC, along with 11 injuries, and 110 people reported missing.

The Ministry of Disaster Management said at a press briefing today that the Sri Lankan Government has allocated Rs. 45 million, to be sent to the relevant Divisional Secretariats for emergency relief work. The Government has also made appeals to the United Nations’ International Search and Rescue Advisory Group, as well as neighbouring countries, to assist in relief efforts. The Indian Government has dispatched two ships with relief materials, and is also sending special medical teams.

The Sri Lanka Army has deployed 12 battalions to disaster affected areas—consisting of 1,200 troops in total. The Army has also deployed 12 BTR armoured personnel carriers, and an unknown number of boats, to assist with rescue operations. No figures are currently available on how many people have been rescued, but operations are set to continue around the clock.

The Sri Lanka Air Force deployed six helicopters to assist in search and rescue operations —these include two Mi-17s, three Bell 212s, and one Bell 412. In addition, a B200 aircraft has been deployed to provide observation and reconnaissance. The Air Force has so far rescued 21 people—four at Ayagama, two at Neluwa, nine at Pahiyangala, one at Upper Neluwa, and five in Kahawatte. One Air Force Officer died in Karapitiya Hospital, after falling from a helicopter during an airlift in Neluwa. Rescue flights have ceased since nightfall, but will recommence in the morning.

The Sri Lanka Navy has deployed 18 search, rescue and relief teams in the Southern Province, and 24 teams in the Western Province—a total of 42 teams, comprising of 261 Navy personnel. The Navy has also committed 42 boats for search and rescue operations. So far, 1,156 people have been rescued by the Navy, and relief efforts will continue around the clock.

Sri Lanka Red Cross (SLRC) has deployed around 230 volunteers and officers to the disaster affected areas of Colombo, Kalutara, Ratnapura, Galle, and Matara. The SLRC also has a number of ambulances, boats, and vehicles in the field assisting with search, rescue and relief operations. In Colombo, around 25 SLRC volunteers are on standby to assist in evacuation efforts around the Kelani River, in case rains resume and water levels rise. The SLRC is currently well stocked, and is providing dry rations, milk powder, sanitary napkins and blankets to disaster-affected families.

For those living abroad and to anyone willing, monetary donations can be sent to @IMCD_official for #FloodSL relief work pic.twitter.com/Y1bTH6AfnQ

For anyone looking to donate dry rations and essential items for #FloodSL victims – pic.twitter.com/y67BHmy9r5

Several roads were also inundated, including parts of the Southern Expressway. The Welipenna, Kokmaduwa, and Kaduwela interchanges were all reportedly flooded.