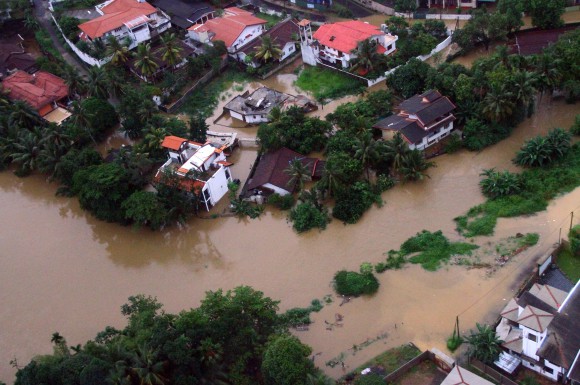 With contributions by Shiran Illanperuma

Featured image: Aerial view of flood-affected areas from Friday, May 26.

According to the latest situation report by the Disaster Management Centre (May 27, 9:00 p.m.), rains, floods, and landslides across 15 districts have affected 415,618 people, belonging to 105,956 families. So far, 122 deaths have been confirmed by the DMC, along with 49 injuries, and 97 people reported missing.

The DMC also estimates that 187 houses have been destroyed, and a further 1,602 houses damaged, while 86,316 people from 20,670 families are currently being housed at 290 temporary shelters.

Extreme danger situation announced for Bandaththara Matara; People have been asked to leave the area immediately as Nilwala River overflows

Earlier in the day, the Nilwala and Kelani rivers were reported to be at risk of flooding, and people in surrounding areas were asked to evacuate.

In the afternoon, the NBRO issued an early warning for landslides in the Ratnapura, Kegalle, Galle, Kalutara, Matara, Hambantota, Kandy, and Nuwara Eliya districts.

According to the Military Spokesperson, accessing certain areas on land has been a challenge. He noted, however, that with improved weather conditions and receding waters, rescue workers had better access to those in need of help.

The Navy had faced issues due to strong currents of flood waters, while strong winds had hampered air movements for the Sri Lanka Air Force.

According to the Sri Lanka Red Cross, rescue boats have been deployed in Galle, Kalutara, Gampaha, Colombo, and Ratnapura. In Galle, at least two people who were stranded required first aid and CPR after more than 24 hours without food. The SLRC noted that providing clean water is a priority.

#FirstAid services were provided to people taken to safety on our boats. Here a girl been given CPR by our FirstAid volunteer. #lka #slfoods pic.twitter.com/lzv4rsYNRw

In some areas like Gampaha, for people reluctant to leave their homes and belongings the SLRC has been working to secure them at home. In Colombo, the most vulnerable communities along the Kelani river have been evacuated voluntarily after being trained following last year’s floods. Ratnapura is currently most in need of supplies but communities in Biyagama and Hanwella are also at risk.

The SLRC also adds that while collecting donations and supplies is a positive effort, private distribution can hamper relief efforts. Relief distribution should ideally be left to the military, local government authorities, or large reputed organisations. People are advised not to be disaster tourists.

Verifying information being shared on social media is also important. The SLRC notes that earlier today, social media posts said that there was a landslide in Deniyaya and that the village was flattened, but the incident had taken place two days ago and most of the village had been evacuated.

Satellite images show pressure systems 100-200 km south of Sri Lanka. According to the Department of Meteorology, rains could begin again on May 29 and the situation could worsen.

In a press release, the United Nations has stated that the UNICEF will donate water containers, water purification tablets and tarpaulin sheets to the DMC. In addition to that, the WHO will be supporting the Ministry of Health to deploy medical teams to the affected districts.

The statement goes on to say that “The WFP and UNDP are supporting the DMC with information management. UN OCHA will provide additional human resources for coordination with Government and Humanitarian Partners. Search and Rescue efforts are on standby from neighbouring countries and can be deployed if needed.”

Aid from the Indian Government arrived this morning in the form of supplies and medical assistance via ship. Another vessel carrying relief materials is expected to reach Colombo tomorrow.

The United States, meanwhile, has pledged LKR 15 million for immediate relief via USAID and the OFDA.

President Maithripala Sirisena visited flood affected communities today, and pledged to proved housing to those who had lost their homes.

I visited the disaster-affected Kaluthara district this morning. The government will give new houses to those who lost their houses.

Private and NGO-led relief work continued through the day, with calls for necessary relief items being made across social media.