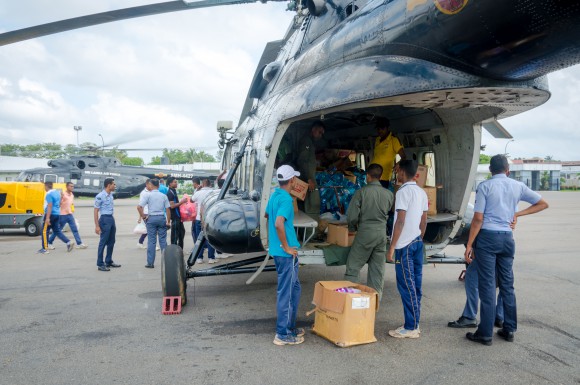 According to the latest situation report by the Disaster Management Centre (May 29, 12:00 p.m.), rains, floods, and landslides across 15 districts have now affected 521,384 people, belonging to 140,238 families. So far, 169 deaths have been confirmed by the DMC, along with 88 injuries, and 102 people reported missing.

The DMC also estimates that 446 houses have been destroyed, and a further 4,362 houses damaged, while 75,308 people from 18,663 families are currently being housed at 337 temporary shelters.

The Department of Meteorology has also issued an adverse weather warning for May 29 and 30.

As of last night, a number of divisional secretariats of the Ratnapura, Kegalle, Galle, Kalutara, Matara, Hambantota and Nuwara Eliya districts were issued an evacuation notice.

This afternoon, the Disaster Management Centre advised evacuees not to return to their homes until further notice.

WARNING : all people who are affected by disaster, don't return to their houses until further notice – Disaster Management Centre #FloodSL

Meanwhile, it has also been announced that schools from the Colombo, Gampaha, Kegalle, Ratnapura, Kalutara, Galle, Matara, and Hambantota will be closed this week.

All schools from Colombo, Gampaha,Kegalle, Ratnapura, Kalutara, Galle, Matara & Hambantota will be closed for the next 4 days #SLFlood

The Army deployed 1,700 troops and 45 armoured personnel carriers (APCs) on the ground yesterday. According to Military Spokesperson Brigadier Roshan Seneviratne, the Pahiyangala and Kalawana areas were inaccessible at first, but they were later able to reach these areas with Air Force assistance. He added that troops have been able to access almost all affected areas for relief and rescue operations, and have thus far rescued 3,426 people from 854 families.

The military commenced work yesterday on clearing blocked routes, including those from Nivithigala to Kalawana, and Deraniyagala to Morawaka. Troops were also deployed to strengthen the bunds at Panapitiya and around the Nilwala river.

An SLAF Airman, Sergeant Y. M. S. Yaparathna, who died from injuries sustained during a rescue operation at Neluwa in Galle, was yesterday promoted to the rank of Warrant Officer by the Air Force Commander.

Earlier today, a Sri Lanka Air Force MI-17 helicopter carrying relief aid to flood victims in the South crash landed in a flooded village after the pilot lost control, but no casualties were reported.

The Sri Lanka Red Cross (SLRC) meanwhile is currently operating in seven districts: Ratnapura, Kalutara, Galle, Matara, Hambantota, and Colombo. According to an SLRC spokesperson, they are working upon the government’s recommendations and not independently. The SLRC has been meeting with the Government Agents of affected areas, obtaining lists of areas that need their attention, and directing their relief efforts accordingly.

Out of those, in Ratnapura, Galle and Matara, they are still rescuing victims marooned in the floods and transporting them to safe locations (designated by respective Divisional Secretariats) via boats. In other areas, distribution of relief supplies, such as food and medicine, has been ongoing since yesterday. The SLRC is also operating medical camps in Colombo and Gampaha. Based on their experience from previous flood relief efforts, they say they are anticipating an epidemic of dengue and leptospirosis (rat fever) in affected areas in the coming days. People who came to contact with the flood water need to be on the lookout for skin sores and signs of fever—especially people with diabetes.

The SLRC says that they have enough supplies to cope with the Emergency Phase. However, if it rains the next few days, they expect to run out of medical supplies. People are encouraged to make monetary contributions, as opposed to foodstuffs, which could go to waste.

According to Mahieash Jonney, SLRC Senior Manager, Communications and Partnerships, the real problem will begin after the water levels go down, when media attention withdraws and international aid dries up. From their experience, he said, Sri Lanka doesn’t do well in the Long Term Recovery phase. For example, the Red Cross still maintains a camp for victims of the Aranayake landslide, which happened in May, last year.

Emergency teams rush food and water to half a million Sri Lankans displaced by the island's worst flooding https://t.co/Fdfy8Umz07 pic.twitter.com/dqGlHpSyWS

The recent disasters have also gained widespread international attention, and foreign aid has been arriving. The second vessel carrying aid and relief supplies from India arrived in Colombo last morning. The Chinese government has offered disaster relief aid worth USD 2.2 million, while the governments of Canada and Australia also pledged to provide assistance as required.

Stay tuned to Roar for more information, and follow @Roarlk for live updates.