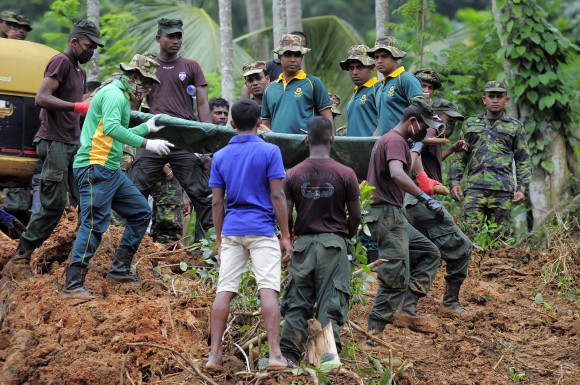 With contributions by Shiran Illanperuma

According to the latest situation report by the Disaster Management Centre (May 30, 12:00 p.m.), rains, floods, and landslides across 15 districts have now affected 575,816 people, belonging to 149,678 families. So far, 188 deaths have been confirmed by the DMC, along with 112 injuries, and 99 people reported missing.

The DMC also estimates that 901 houses have been destroyed, and a further 6,064 houses damaged, while 76,754 people from 19,068 families are currently being housed at 383 temporary shelters.

The Department of Meteorology had previously issued an adverse weather warning for May 29 and 30. As per its latest update, however, the possibility of heavy rains and strong winds is expected to reduce by tomorrow (May 31).

Last afternoon, the Disaster Management Centre advised evacuees not to return to their homes until further notice.

Meanwhile, it has also been announced that schools from the Colombo, Gampaha, Kegalle, Ratnapura, Kalutara, Galle, Matara, and Hambantota districts will be closed this week.

Military troops have continued work on the ground, focusing on clearing areas in all disaster-affected districts.

Military Spokesperson, Brigadier Roshan Seneviratne told Roar that troops are also currently engaged in assisting hospitals and clearing water wells. Medical teams have been deployed to Pahiyangala and Kalutara, and up to 35,000 meal packets are being delivered daily to the flood affected.

“As per the Met. department we expected rains yesterday (May 29) and today (May 30) but fortunately, it didn’t rain. We hope water levels will recede,” said Brigadier Seneviratne, adding that “if there are no rains in the next few days, then the water will recede and things will go back to normal.”

The Sri Lanka Red Cross, meanwhile, said that relief operations have been ongoing across six districts, and teams have now been able to reach areas previously inaccessible, like in Matara and Galle.

An SLRC spokesperson told Roar that they are now scaling up distribution of food items and non-food relief. The recovery process has been initiated, and volunteers have moved on to the next phase, which is cleaning.

According to the SLRC, government medical officers are currently in the process of inspecting wells and certifying the water fit for consumption. Wells are susceptible to get contaminated during a flood, and ensuring safe drinking water is a priority.

The SLRC says it is now operating 8-9 medical camps in Gampaha and Galle, and stockpiling medication, as precautions need to be taken against the spread of potential infections and diseases.

Featured image: The body of a young girl is recovered from a landslide site in Eheliyagoda, Ratnapura. Image credit: Roar/G. Gamage