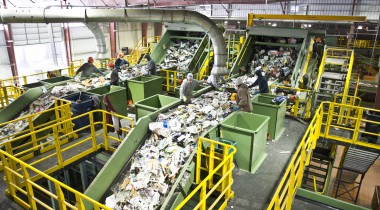 The Story Behind Our Solid Waste (Mis)management

In 1969, at an oil well in Santa Barbara, California, a drill sunk under the sea-surface made a wound too deep. An uncontainable eruption of pressurised crude oil followed, and the underwater seepage continued to spread, poisoning about 10,000 sea creatures to death. Sufficiently chastised, governments finally paid heed to the doomsday warnings of conservationists and scientists. In 1970, the first Earth Day was organised. The enthusiasm quickly spawned a financially lucrative industry of private recyclers.

Beginning as an idealistic campaign, recycling has by now surpassed its initial ambitions. Some nations within the European Union now recycle about 65% of their total waste, burning about 20% of the rest for energy, and minimising the remainder that would be disposed of in landfills. By April 14 this year, Sri Lanka, too, experienced its instructive disaster. But have we learnt anything?

Established under the National Environmental Act, the Central Environmental Authority (CEA) is the apex body that directs the national policy on pollution control and environmental management. In addition to their lofty main role, the CEA also intervenes in the event of environmental disasters. The incredible proportions of the Meethotamulla garbage mountain made everyone question whether Sri Lanka even has a recycling programme at all. The CEA has a project named “pilisaru” dedicated to recycling. Speaking to Roar, the Deputy Director General of Waste Management of the CEA, J.M.U. Indrarathna, said that an appreciable level of awareness about waste management has been created.

“Pilisaru means re-enrich, or make usable again,” said Indrarathna. “We started this programme in 2008. This was a time when local government authorities paid little attention to waste management. By now we have introduced around 150 compost programmes to local authorities.”

However, there seems to be a misalignment of policy and implementation at some point of the bureaucratic line of command. Sri Lanka even has an industry of private recyclers, which, according to Indrarathna, is hamstrung by the poor garbage segregation that happens at the initial stage of garbage collection.

“If the CMC has said that they separate the waste that is collected, that is only a half-truth,” said Indrarathna. “Even though some level of waste segregation happens under any municipal council, we can say with assurance that there was no satisfactory garbage separation carried out within Colombo. Otherwise, there wouldn’t be a garbage mountain like Meethotamulla.” The Sri Lanka Association of Recyclers also confirms this diagnosis: there are simply no enforced standards on garbage separation at the point of collection. Indrarathna says that, in Colombo, the problem is exacerbated by overpopulation and haphazard urbanisation. He estimates that the garbage generated within Colombo accounts for about 10% of the total garbage generated in the entire island. At the point garbage leaves households, the CEA data claims that about 35% of it is recyclable. At Meethotamulla, however, garbage ends up as 100% garbage—an irredeemable jumble.

The country produces about 8,000 tonnes of garbage, and only about 120 tonnes of it is absorbed, per day, by the recycling industry. “The problem is that we don’t even have a collection network for easily recyclable items like PET bottles,” said Indrarathna. PET bottles, or polyethylene terephthalate, require fewer processes to recycle and have a high market value. However, Sri Lanka still has no system for PET items to be collected on a mass scale.

For recycling to be financially lucrative, Indrarathna said that selective garbage collection has to happen at a large scale, the kind that is only possible under government sponsorship. A private individual collecting a tonne of PET bottles for recycling would not even be able to recover the transport cost. Even though there’s a lot that citizens can do before the garbage leaves their households—to both minimise and separate waste—they can’t override systemic inefficiencies.

PET bottles can easily be recycled if they are disposed of separately. Image credit: left, banthebottle.net; right, pinnacle-recylcing.com

The Colombo Municipal Council (CMC) proclaimed a new standard for garbage collection in 2016. It was, in fact, the old standard, enforced garbage separation, but this time the CMC said that it would refuse to collect unseparated garbage. This initiative, too, met with the old hindrance, public apathy and hostility.

“The people have shown very little support,” said Deputy Director of Solid Waste Management of the CMC, Shahina Maisan. “When we began our new programme of collecting only separated garbage, we had to do it with the assistance of the army and the police. The people did not cooperate otherwise. For example, recently, when our garbage truck drivers refused to collect unseparated garbage, the people in Manning Town, Kirulapone, physically assaulted the drivers.”

Even if garbage separation is enforced, Maisan is not optimistic about waste management in the short run. Sri Lanka does not have any state-owned recycling plants or incinerators. All the recycling is done by private contractors.

“Say we segregate the garbage,” she said, “we still need a large land where we can compost the biodegradables. If we incinerate the garbage, then we have to invest in systems to purify the gases before they are released to the atmosphere.”

Maisan said that Sri Lanka needs to invest in pelletisation plants, which process used plastic products and transform them into reusable plastic pellets.

As of now, the garbage separation that happens in Sri Lanka is limited to the garbage collectors themselves, as they perfunctorily scan the bins they collect from households and scavenge for items that they could resell.

Whose Fault Is It?

The government has multiple departments tasked with waste management, with seemingly overlapping mandates. There is the CEA, the Waste Management Authority, the Ministry of Environment and Mahaweli Development, and the National Solid Waste Management Support Centre (NSWMSC), as well as individual departments within municipal councils and urban councils. The CEA’s Indrarathna told Roar that the absence of a focal point for their collective responsibility may have contributed to Sri Lanka’s waste mismanagement. However, Director of the NSWMSC, Athula Illangasinghe, believes that the multiple organisations inhabit clearly defined jurisdictions, and are organised to form a cohesive whole.

He explained that the ultimate responsibility of collecting garbage lies with the local authority, such as an urban council or a municipal council. Though the NSWMSC directs these local authorities, they are independent and have the power to create subsidiaries or delegate powers. The Waste Management Authority is one such subordinate institution created by the CMC. Above all these is the CEA, which directs the national policy on waste management. “We cooperate,” explained Illangasinghe. “We do not clash.”

What The Citizen Can Do To Help

Lunch sheets are a major component of our garbage problem, and are easily avoidable with the use of lunch boxes or banana leaves. Image courtesy cliveinsrilannka.blowspot.com

By the time the municipal council handles the garbage, it may still be too late. Merely separating garbage is not enough. Illangasinghe stressed that the separated garbage must be in a condition amenable to recycling.

“Items like lunch sheets and polythene bags are problematic,” said Illangasinghe, “because they are usually dirty. Things like yoghurt cup covers and medicine containers are not bought by recyclers because they can be toxic. The only solution is for people to reduce and reuse as well as recycle.”

Indrarathna believes that the responsibility of waste management is held concurrently by the private citizen as well as by the municipal council to which he or she belongs.

“For convenience, we could separate garbage into these three categories,” said Indrarathna. “On one end is the group of recyclables such as bottles, newspapers, and paper, which the average citizen can resell to the market. On the other end, there is short term biodegradable waste such as kitchen waste, hotel waste, street sweepings, tree leaves, market waste, and other such organic matter that decompose within three to six months. This category needs to be composted. Between these two categories is the remainder which cannot be recycled or reused. We must systematically reduce this third category to at least 40%.”

Because of poor garbage separation, the CEA estimates that about 65% to 70% of Sri Lanka’s waste ends up in the third category. Unlike developed nations, Sri Lanka does not even possess sanitary landfills to cope with this accumulation of worthless garbage. This is why an outrageous percentage of garbage is destined for open dump sites like Meethotamulla.

“In our industry, we always say that garbage is gold,” said Indrarathna, remarking on the potential value of garbage as an energy source. “We simply must increase our recycling percentage.”

What The Government Can Do Even in the waste-consuming, renewable idylls of Europe, a percentage of garbage remains garbage, and is sent to landfills and incinerators. Deputy Director of Solid Waste Management at CMC, Maisan, believes that Sri Lanka could aim for the same three-tiered solution.

“The short-term biodegradables have to be composted,” said Maisan, “but we also need sanitary landfills as well as incinerators that can turn garbage into energy.”

Both Maisan and Indrarathna stressed the necessity of investing more in the industry of waste management, and purchasing essential components of the process such as pelletisation plants. Indrarathna also said that the recycling industry in the country is short of labour.

“Even though the country has high unemployment,” he explained. “The number of people who take up this industry is extremely low because of the unpleasant way in which garbage is handled. This industry has been there for about a decade, but it still has a very long way to go.”

Ideally, special categories of waste such as e-waste should be separated and given specialised treatment. Image credit: top, Sunday Times; bottom, ewaste.lk

Education and encouragement of the public, even with government initiative, still leaves some ground uncovered. For policy to succeed, it has to be enforced, by penalty if not by reward. The CEA already has the power to prosecute urban councils who do not perform their duty in terms of waste management, and private citizens who obstruct them. Indrarathna also envisages further, more proactive legislation. Most other countries have the ‘polluter pay principle’, which imposes a tax on citizens for any damage done to the environment. Some countries follow the ‘extended producer responsibility principle’, whereby the producers add the cost of recycling into the market price of the product. This incentivises producers to design products that have minimal impact on waste disposal.

If words become actions, in the future, Sri Lanka would have educated citizens who separate their garbage into the three categories; educated garbage collectors who transport them to their separate destinations; and an entire industry eager to turn it into reusable resources and profit. In the meantime, is there anything that we can do with Meethotamulla, with our pile of decades-old mistakes?

“The Meethotamulla garbage mountain can’t be moved suddenly to a landfill,” said Indrarathna. “At the present, the garbage issues a black ooze called leachate. This is highly toxic. You can’t use it the way it is for projects like the Hambantota Port, for reclaiming land from the sea. The leachate has to be treated, and detoxified by airing it for at least four years.”

Eventually, when the Meethotamulla garbage becomes usable, Indrarathna cautions that another step will be involved. A layer of sealant called liner, a hectare in millimetre thickness, costing approximately Rs. 5 million, will need to be imported.

On April 22, a week after the Meethotamulla disaster, Sri Lanka joined the world to celebrate Earth Day. Sri Lankan politicians sent their obligatory press releases, perhaps overcompensating for the public disgust, pledging not just to solve the garbage problem, but also to reverse climate change. It is time for good governance to mean more than platitudes and unfulfilled promises.