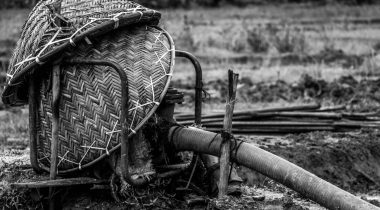 It is a gloomy Sunday at around 11.30 in the morning. From the Gorakala bus stop, a turn off the Ratnapura – Horana main road leads down a narrow road, muddy after the previous night’s heavy rain.

A quiet, uneventful walk of 2.5 km leads to a semi-forest area, with a paddy field to the right. Another 500 metres away is what we have come in search of: a gem mine. The owner agrees to let us photograph the mine and the mining process, and the workers comply.

There are different methods of gem mining here in Sri Lanka, and one of the common mines is the pitting mine, which is essentially a shaft going down into the earth, made up of several levels. It is at one of these mines that we find men willing to venture far down into the earth, risking their lives for rocks ‒ albeit very valuable ones.

The six men working in this mine are determined to return home successful in their endeavours. Two of them say they are from the neighbouring district of Kegalle. They explain that there’s about a 25% chance of successfully finding gemstones in a mine. Next to the mine lies a pile of rocks, from atop which around three or four other mines can be spotted, left abandoned after being dug through in the hopes of finding gems. The dreams of these men, it appears, are buried very deep in the earth.

Climbing down into the mine is a treacherous process in itself, as we learnt first hand in our attempts to capture these photographs.

Thanks to the recent rains, the wooden logs that are meant to offer support were extra slippery. The deeper you go, the colder it gets. At the very end, water levels reach up to your knees.

Although deep down the pits are dark, looking up one can see a bright light ‒ symbolic, perhaps, of the hopes the miners hold on to each time they make the journey into the earth. Different mines offer different types of payment methods to their labours. In this case, the six men will only get paid according to how many gems the owner actually sells. If they don’t find any gems in this spot, they will be paid only for their labour, and the mine will be closed.

Normally it takes around 25 floors/levels to find an actual gem pit. This is a tough task, as it will take close to five or six months to dig that deep. And will still be a 75% chance that the miners will not find any gems at all. On top of all that, these men are risking their lives every day, for there is no knowing if and when the walls could collapse. However, the miners are, for the most part, positive. “Sir, our lives may be at risk but are hopes aren’t,” one of them says.

At one point, a tense situation arises. The north side of the 10th level of the pit develops a leak, and water and mud start to pour into the mine. The men have to act quickly to avoid a threat to their lives. The miners at the top quickly pull up the dahabare with the help of huge logs. They then place one log across the mine and one man climbs on the log and starts placing pieces of wood in that problem area while two of his colleagues assist him.

Once that is done, the miners now work very hard to secure the 12th level of the pit, cutting wood, dragging mud out of the mine, and placing leaves to absorb the moisture. Above, a huge rain cloud gathers in the sky and the wind picks up speed. The men have less than an hour to finish their work and exit the pit.

Once the 12th level is finally secure, everyone climbs out. The head of the mining party grabs his lucky basket and arrives at the water hole that they constructed close to the mine. Two of his fellow miners go and pick up a basket full of mud-covered stones and put them with the leader’s basket. He washes them carefully, sifting through the rocks, with a keen eye watching for the prized stones. Searching for some good luck.

And if they don’t find what they’re looking for, they will return tomorrow, lower themselves into the heart of the earth, and keep searching.