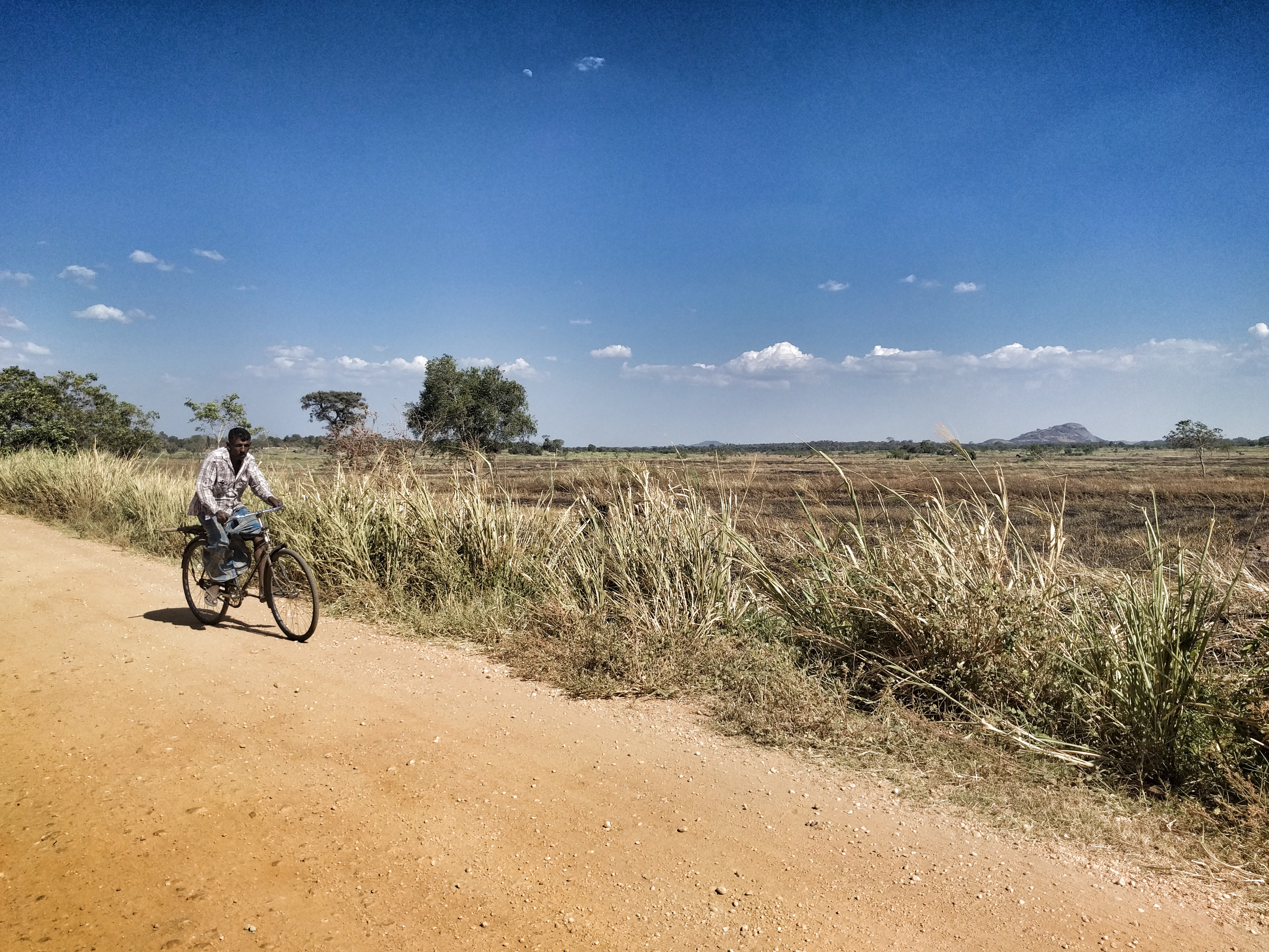 In Drought-stricken Welikanda, Water Is A Luxury

In the South Asian subcontinent, nobody goes to the bathroom without some water handy.  For the people of Mahawelithenna, however, in the outskirts of the drought-stricken Welikanda Divisional Secretariat in Polonnaruwa, addressing this most basic of human needs has become something of a luxury, due to a crippling shortage of water brought about by unusually severe drought conditions. (Never mind that 10 families have to share one toilet).

Down But Not Out

Speaking to M. Fathima and her neighbours, who live in houses made mostly of mud and thin metal sheets in the driest corners of these [rain]godforsaken lands, it becomes quickly apparent that the villagers of Mahawelithenna have an uncanny ability to see the bright side of things.

“We all go to the same toilet nearby,” she says, indicating her immediate neighbourhood. “It’s quite a ways away from the houses here, but it’s well made, with four walls and everything.”

The only problem, she told Roar, is that there is no direct water supply to the toilet and she and her husband have to carry water from home in a pail – precious water from the government that Fathima must keep stored in her four little water pots (kalagedi). Life-giving liquid that she is forced to use sparingly over the course of two days, until the next water bowser from the Sri Lanka Mahaweli Authority is due.

Bowsers To The Rescue

According to the Welikanda Divisional Secretariat, drinking water sourced and filtered from the Mahaweli River is supplied to Mahawelithenna and surrounding villages, all the way from Gallella which is about Rs. 100 away by bus.

“It’s enough for drinking and cooking,” says the ever-optimistic Fathima.

Over 30,000 people or 8,500 families in Welikanda have been affected by this year’s drought. According to the surprisingly resourceful Divisional Secretary of Welikanda Harsha Bandara, (who, interestingly, uses a Twitter-based SMS service for his drought relief efforts), about 3,000 litres of water is distributed to the affected families using 16 water bowsers.

Water sufficient for several houses is filled into one tank upon every delivery.

“One household uses three water pots a day. For bathing, we go to the lake, which on some days is completely dry. And of course there is no water in the wells,” says Fathima.

There is a large well in her yard, constructed by a private aid organisation, meant for the use of her neighbourhood. We took a peek. As expected, there was not a drop of water in sight.

The dried up well near Fathima’s house. Image courtesy writer

A Bit Of History

Fathima has two grown children, both of whom live in relative comfort in Gallella. Why do she and her husband choose to spend the eve of their lives, eking out a living in this desolate, bone dry, husk of a settlement?

“We were settled here in 1992 [by the government]. Our kids were small then. After terrorist problems sprang up, we were forced to move. We were resettled in 2002, but there was trouble again and we had to leave a second time. The kids grew up and got married. And again in 2008 we came back.”

Fathima’s neighbour A. Nasurdeen, who also settled in the area in 1992, was more vocal about the problems faced by his fellow villagers, alluding to economic hardships and rampant unemployment in the area.

“Life is hard enough as it is here with no water” – A. Nasurdeen. Image courtesy writer

“Life is hard enough as it is here with no water, and on top of that there are elephant problems to deal with. This is the last village in this area. We’re all poor people. There’s not much cultivation these days and there is no good price for paddy. The Government has given houses to some families but not for all,” he complains.

A lack of water is not the only problem faced by the poverty-stricken villagers of Welikanda. According to Nasurdeen, elephants freely roam about, often breaking through the electric fences put up on borders by the authorities.

M.W.G. Ayirawansa, who runs a hybrid restaurant plus convenience store on the other side of the village, spoke to Roar about how his business has been badly affected by the drought, which has been going on for five months straight.

“There has not been much of a paddy yield this cultivation season. Water is supplied by the Government, but it’s not enough. We take water from the canal to wash our dishes,” says Ayirawansa.

Due to the added economic hardships brought about the drought, life has become frustratingly difficult for Ayirawansa and his family.

“People work for hire at paddy fields for Rs. 500 a day.  Most of them have to start work at 7:00 in the morning and toil away till 5:00 p.m. It’s not easy. Because there’s no income for the people, they have no money to spend at our businesses,” he said.

What Can Be Done

Welikanda hasn’t seen a drop of rain in six months. According to Secretary Bandara, however, this is nothing new. Although, admittedly, conditions have been unusually harsh this year. Up to 25 out of the 41 local water projects carried out using water sourced from Mahaweli river canals and offshoots have dried up completely.

“This problem isn’t new. Ours is a dry area. There is no groundwater or spring water in our division. When these areas were populated in the 1980s through the Mahaweli Authority, there was no drinking water project proposed. The issue here is that there is no drinking water project based on the Mahaweli river. We hope the proposed Towns East of Polonnaruwa project will serve as a lasting solution this problem,” he said.

The Towns East of Polonnaruwa Water Project, starting next year, is expected to be carried out till 2019 and could offer some much-needed relief to the people of Welikanda.

“As a result of closing the Mahaweli canals, there is a danger of all local water projects drying up. If this continues over the next two weeks, water will have to be supplied to all 41,000 people in our division,” he said.

It is clear that the Welikanda DS is doing its best to rise up to this challenge, but a permanent solution is still not in sight, the proposed Towns East project notwithstanding.

“This is the inter cultivation season (anthar kannaya). The impact wasn’t that great last season, but if there is a shortage of rain in the central highlands and it becomes difficult to cultivate our paddy fields next season, we have proposed a Cash for Work mechanism in order to raise funds for people to earn an income,” says Bandara.

The Welikanda irrigation system is fed by canals that shoot out from the Mahaweli river. Water is directed to the system from the Maduru Oya following seasonal rainfall in the central highlands. Bandara expresses his confidence that by the beginning of the next cultivation season, the system will be reopened and refill the system. This will, of course, be decided by the amount of rainfall in the centre, which can and does vary.

One of the canals. Drone photo courtesy Sanjana Hattotuwa

It’s not just humans suffering in Welikanda, though. Elephants and other animals too are desperate for some relief. Thankfully, the Government has taken steps to fill up dried up lakes as much as possible for the benefit of the hapless animals. One positive side effect of these efforts is that thirsty elephants will no longer make their way to human settlements, diminishing the ongoing human-elephant conflict, says Bandara.

“Our DS is located in between the Somawathi reserve and the Maduru Oya reserve. There is a natural elephant route between these two reserves that cuts across Welikanda. With the development projects carried out in the recent past, parts of this elephant corridor were blocked. Three years ago cattle and elephants were transported to our area from other parts of the country, which resulted in the human-elephant conflict escalating,” he says.

“Normally, when dry season arrives, wild elephants take to the villages looking for water. So this year, through the intervention of the Mahaweli Authority, we have been releasing some water to the irrigation system for the animals to drink. This is to minimise the threat of elephants entering villages.”

Some water is still released from the Maduru Oya for local water projects and for the villagers to bathe with, as well as for their toiletry needs.

“We release drinking water via bowsers, but water for other purposes is released in limited supply via the Mahaweli canal network, especially to feed the irrigation system for the benefit of both people and animals. We’re trying our best with our limited supplies. Though we aren’t entirely successful because of the extreme dry weather, we are trying our level best to overcome it,” reiterates Bandara.

Among the myriad of modern day amenities that we city folk take for granted is running water. On the odd day that there is a citywide water outage, we like to curse the Government and complain loudly about just how awful our public utilities are. Why should any decent, hardworking taxpayer suffer the indignity of storing water in buckets for later use? This isn’t what we voted [insert local political bigwig’s name] in for.

In our righteous anger, however, it is easy to forget that there is a section of our society for whom this is a daily occurrence – an inescapable reality that can only be described as a living hell. Not only do these people have no running water (unacceptable in this day and age, you might feel), they can go for months on end without a drop of water sourced from their own back yard – at least, none that is suitable for human consumption. Here’s hoping that rains will arrive in time, and the people of Welikanda find the relief they so desperately need.