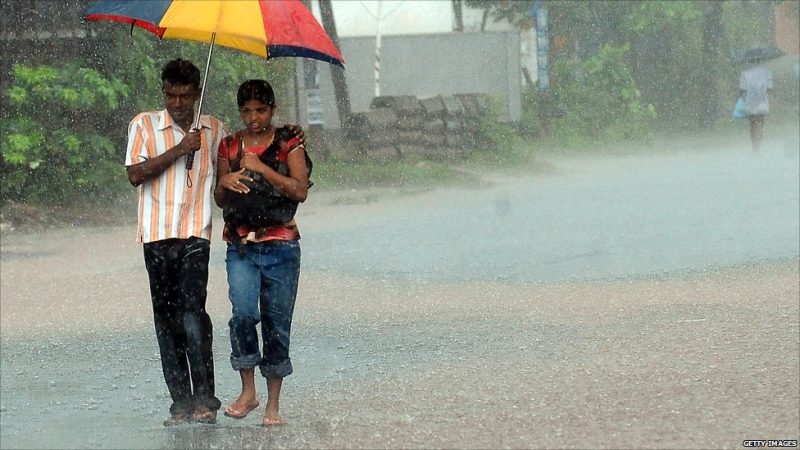 Everything You Need To Know About The Rains

Gone are the days when we had to offer water to the Sri Maha Bodhi tree in the hopes that the sun would take the hint and make way for rain. The nearly 36 hours of nonstop rain which flooded roads (and homes) all over the island has made many of us wish the sun would return, even for just a few hours.

At the beginning of the month,  villagers from the North East and North Central Provinces were praying for rain in fear that the drought would cause the ancient giant tanks and irrigation systems to dry up. Now, however, the rivers Kelani, Mahaweli, and Kalu Ganga have reached spill level, and people are being promptly evacuated from some areas, according to the National Building Research Organisation (NBRO).

May is typically when Sri Lanka experiences an increase in rainfall from tropical lows and cyclones, which tend to develop during the leading edge of the monsoon.

According to the Department of Meteorology, the low pressure area which developed due to a small disturbance in the Bay of Bengal is moving away from the island, which means that the heavy rains will reduce to some extent, albeit at a slow pace. Strong windy conditions and light rains are to be expected for a few more days.

What Exactly Is Causing This Storm?

According to accuweather.com, widespread rainfall of 100-200 mm (4-8 inches) of rain is expected across the region tomorrow.

Speaking to Roar, an official from the Department of Meteorology said that a disturbance in the Bay of Bengal to the South East of Sri Lanka has developed into a low pressure area, located over the Batticaloa coast. This basically means that the stormy clouds are over Sri Lanka and heavy rains are to be expected.

We’ve already had sudden and widespread flooding in different parts of the island, with some areas already reporting more than 250 mm (10 inches) of rain, including in Colombo.

However, the Met Department said that it is quite possible that the worst is behind us, and for the next few days the rains might not be as brutal as they were on Sunday (May 15) and today (16). While this is a very calculated estimate done by the Met Department, there’s really no saying what turn the weather will take.

In fact, according to one Indian weather channel, “the low pressure area over Sri Lanka and adjoining Gulf of Mannar is expected to intensify into a depression within 48 hours.”

More than 60 Army personnel of the 583 Brigade, commanded by Brigadier Chandula Hathnagoda, were engaged in rescue and relief operations today with the assistance of residents in disaster-struck areas. Image courtesy: Army Media

While the howling winds may give cause to alarm, it’s even more disturbing when there has already been ample destruction this early in the rainy season. Officials from the Disaster Management Centre (DMC) this morning told Roar that at least eight people, including a 10 month old baby, were killed, while thousands were forced to leave their homes, as a result of the various disasters this weather brought on.

Furthermore, according to data gathered by Disaster Management Units across the country, over 4,000 families have been affected by the prevailing weather conditions, and around 10 temporary shelters have been set up to relocate those affected by the weather.

As of today, nearly 2,000 individuals have been temporarily accommodated and provided with relief measures under the supervision of District Secretaries.

Forces And Police To The Rescue

Following heavy storms that swept across the Nalluruwa and Panadura areas yesterday, 14 Division troops, commanded by Brigadier P.J. Gamage, were deployed to the areas to carry out relief work. Image courtesy: Army Media

Army Media Spokesperson Brigadier Jayanath Jayaweera told Roar that hundreds of troops from the tri forces have been deployed islandwide to provide relief to affected areas and engage in rescue operations, in the wake of worsening weather conditions and torrential rains.

Furthermore, he said that the forces have also been deployed to various other areas too, to provide assistance and relief to those affected by rock falls, floods, and other adverse effects of the prevailing weather conditions.

“Thirty Navy personnel and twenty-five Army personnel have been deployed to the Diyawanna area near the Parliament to attempt to control the rapidly rising levels of water. In addition to that, the Navy has deployed one team with a boat to assist those in Wellampitiya, Malwana, Bandaragama, and Rajagiriya: Royal Park,” he said.

He added that, “two other teams were sent to the Avissawella area with two boats. Some of the troops have been earmarked to react to unforeseen situations.”

A mass lump of soil fallen in one part of Dehiowita had to be removed by Army Engineer troops this morning. Image courtesy: Army Media

In addition to this, rescue troops were sent to the Dehiowita area yesterday amidst blocked roads, fallen trees, electric wires, and rock falls, in search of three individuals reported missing after landslides.

“The residents had already recovered one body from the rock falls by the time the troops reached them. The army troops were able to recover another body and now they’re in the process of recovering the third body,” the Brigadier said this afternoon.

Meanwhile, Police Spokesperson ASP Ruwan Gunasekara said that the Police officers of every police station islandwide have been instructed on how best to face unforeseen circumstances due to the adverse weather conditions.

Not two weeks ago, the Ministry of Education issued a release stating that schools in the North Central Province should close early should the heat continue. However, just today, the Ministry, taking into account the drastic turn of events, said schools might have to close alright, but this time due to incessant rains.

Minister of Education, Akila Viraj Kariyawasam, said in a statement to the media that the authority to decide on school closures has been vested with the Provincial and Zonal Education Directors.

Furthermore, the weather and the rains have caused such concern, that officials of the Education Ministry have been instructed to prioritise the safety of students and teachers when deciding whether to close schools until the weather calms down.

The rains may be romantic, but floods most definitely aren’t.

The Met Department has noted that the heavy rains bring about heavy lightning activity, especially during the evening. The Department has thus issued a warning and asked the public to take precautionary measures.

A few important things to remember during storm events: during thunder and lightning, keep your phones aside and unnecessary electrical appliances switched off. If you can afford to, it would also be best to stay indoors like your Ammi asked you to!