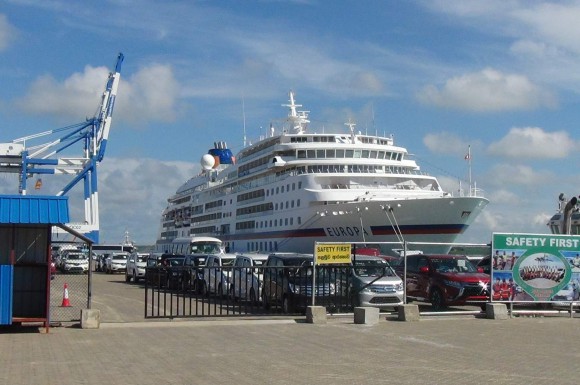 Everything You Need To Know About The Hambantota Port Lease

The controversy surrounding the Concession Agreement (CA) signed between Sri Lanka and China on Saturday, July 29, handing over a majority stake of the Hambantota Port to a Chinese state-owned company, is showing no signs of abating anytime soon. Questions abound on the long term benefits to Sri Lanka, if any, of the USD 1.1 billion 99-year lease, with many parties raising concerns about the veracity of the claims made by the Government. Some have even gone as far as to claim that this may be setting the stage for a Chinese colonisation of the southern city.

When Did This All Begin?

Under ‘Part II: Connecting to Growth: Sri Lanka’s Poverty Reduction Strategy’ of the official Regaining Sri Lanka document, it reads “To strengthen the regional ports, over the longer-term, Hambantota is to be developed as a major port and, when peace is secure, the Trincomalee port will be upgraded.”

Plans had been formulated to develop the port with the objective of bringing employment to the poverty-stricken district of Hambantota, providing jobs for over 25,000 residents. Proposals for the port area included an oil refinery, petrochemical related industries, a coal powered thermal power station, and a desalination plant. However, the premature change in government just two years later meant that the project never materialised.

Who Rebooted The Project?

Construction of the Hambantota Port proper began in 2008 in the home turf of Former President Mahinda Rajapaksa. The first phase of the Port, now rebranded the Magampura Mahinda Rajapaksa Port, was declared open in November 2010. Phase 1 was constructed at a cost of USD 361 million, 85% of which was financed by the EXIM Bank of China at an interest rate of 6.3%.

The port was developed with the hope of attracting the heavy traffic along the east-west shipping route located just 10 nautical miles south of Hambantota, but expectations were not met (only 44 ships have been handled by the port since 2015), in stark contrast to the Colombo Port, which is ranked one of the top 35 harbours in the world. Incurring heavy losses (to the tune of over Rs. 18 billion), the port was well on its way to becoming yet another white elephant, not unlike the neighbouring Mattala Airport which was also financed by a loan obtained from the EXIM Bank.

Governments changed again and it was now up to the new ruling SLFP-UNP coalition to sort things out and either continue or abandon the next phase of the project.

Why Did The Government Agree To This?

Sri Lanka is facing a crippling debt trap, the likes of which it has never seen before. At the start of the year, we owed the world an estimated USD 65 billion (a figure that varies depending on whom you ask), USD 8 billion of which is owed to the emerging global superpower that is China. For context, Sri Lanka’s gross domestic product (GDP) is just over USD 81 billion, which means our current debt to GDP ratio is in the range of 75 to 79%, and, if some contingent liabilities are taken into account, can even be as high as 82%. Over 95% of all government revenue is spent on repaying these debts.

Sri Lanka borrowed heavily from China to finance multiple large-scale development projects following the end of the war in 2009. The country has been struggling to pay back these loans ever since and, in desperation, the new Government had to agree to an equity swap with China, with the latter initially negotiating for an 80% stake in the Hambantota Port in exchange for essentially forgetting about some of the debt—a much-needed reprieve.

Despite the UNP-SLFP coalition’s strong rhetoric against Chinese funded development projects in the run up to the January 8, 2015 Presidential polls, the new Government was forced to play ball.

Why Is China Being So Nice To Us?

China has had its eyes on the Hambantota Port for some time now, given its strategic location overlooking the Indian Ocean. The southern Port will be an important stop in its ambitious One Belt One Road initiative—otherwise known as the 21st Century Silk Route—that aims to link mainland China to a bulk of Asia, Europe, and parts of Africa.

Critics have called it part of China’s aggressive debt-trap diplomacy in which Beijing allegedly tricks poorer nations into accepting massive loans to finance projects those countries could never afford on their own, eventually stepping in to “rescue” them from the inevitable debt trap in exchange for a firm geopolitical foothold in a strategically important location.

Apart from Hambantota, China has already developing ports in Pakistan, Myanmar, and elsewhere. This has our immediate neighbour—our own regional superpower, India—more than a little worried.

How Does New Delhi Feel About All This?

It is no secret that India, given the ongoing geopolitical chess game with China, has been wary of the latter’s increasingly dominant presence in Sri Lanka. Now that Beijing has secured a port for 99 years in its own backyard, New Delhi is naturally going to be looking over its shoulder constantly.

Indian analysts, however, have opined that Sri Lanka’s assurance that no military presence from China will be entertained, should allay some of India’s growing fears.

The island nation of Sri Lanka is forced to keep both sides happy, struggling to strike a balance that isn’t always easy to maintain. New Delhi, for its part, has not given up on its own plans to acquire the oil tank farms of Trincomalee.

After months of delay, the tripartite Concession Agreement was finally signed on July 29 as a private public partnership (PPP) between the Ministry of Ports and Shipping, the Sri Lanka Ports Authority (SLPA), and China Merchants Port Holdings Company Ltd. The agreement saw two separate companies being set up to oversee commercial and security operations of the Port.

According to Government statements to the media, the Chinese state-owned company will have a 70% stake (the earlier 80% having been reportedly been renegotiated) of the Hambantota Port for a period of 99 years, along with 1,235 acres of land allocated adjacent to the Port for a proposed industrial zone. (The earlier reports of 15,000 acres of land that were to be acquired for an industrial development zone in Hambantota is for an unrelated initiative). The Government laid heavy emphasis on the fact that Sri Lanka retains the right for any military operations in and around the Port, with no foreign military presence allowed without prior approval from the Government of Sri Lanka—allaying fears the Port may end up being used by the Chinese military. Chinese participation will be strictly commercial, the Government insisted.

“We are giving the country a better deal without any implications on security,” the BBC quoted Prime Minister Ranil Wickremesinghe as saying.

The Government has also said that Sri Lanka retains the option to amend the agreement should any aspect of it prove to be not in her interest, adding that the Chinese have agreed to this, though critics worry that there is no guarantee that China will honour this.

Critics warn that CMPort’s controlling stake in the Hambantota Port may not be in Sri Lanka’s best interest. Image courtesy Colombo Gazette

China Merchants Port, or CMPort, will hold a majority stake of 85% of HIPG, with SLPA holding the remaining 15%. Though there were reports earlier to the effect that the Government of Sri Lanka will hold a majority stake of HIPS, as per the July 29 agreement (as pointed out by the Sunday Times), it will be shared thus: 42% held by the SLPA, and 58% held by HIPG—meaning, contrary to earlier claims, the SLPA will, in fact, be a minority shareholder in both companies.

Earlier reports indicated that SLPA will hold 50.7% of HIPS, with China sharing the remaining 49.3%, giving Sri Lanka majority stake of the USD 606 million company. The Sunday Times, however, quoting unnamed corporate analysts, noted that SLPA’s 50.7% stake is comprised of 8.7% in HIPS shares, which is not direct, but rather represented through HIPG in a “convoluted share structure.” According to the weekly newspaper, the document signed on July 29 does not mention the SLPA’s 8.7% stake to be held separate in HIPS.

“The Agreement, which is a legally binding document, states that ‘initial equity share capital to be comprised of 42% to be held by the SLPA and 58% to be held by the HIPG operator.’ The document signed yesterday (July 29) does not mention SLPA’s 8.7% stake to be held separately in HIPS. Instead, it says the HIPG would hold 58% stake in HIPS,” the newspaper reported.

What Can We Expect?

However one feels about the Concession Agreement, the fact remains that it has already been signed. The Government’s insistence that China will be agreeable to a potential amendment of the Concession Agreement at Sri Lanka’s request may ring hollow, given that China holds a controlling stake in the endeavour. Some critics argue that this was never a commercial exercise to begin with, but rather a transparent attempt by China to grab a strategically important harbour in its quest for geopolitical dominance—particularly in the face of rising tensions with its trade rivals, India and Japan. Sri Lanka, caught between these giants, has 99 years to see how this will all play out in the end.