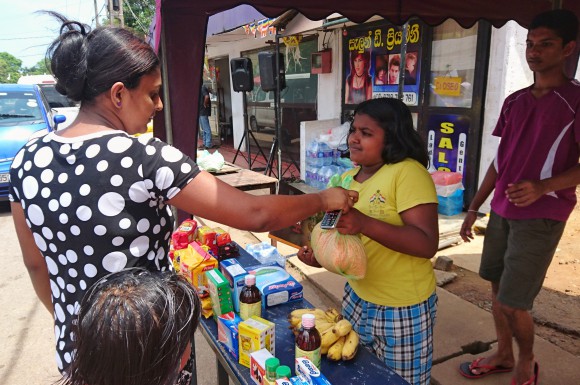 Disaster Management Minister Anura Priyadarshana Yapa arrived in Sri Lanka today, shortly after Mora, the cyclone that wreaked havoc on the island over the past few days, moved on to Bangladesh and Myanmar. The Minister was away in Mexico attending a global conference on Disaster Risk Reduction, where he highlighted Sri Lanka’s efforts to “minimise casualties, damage to infrastructure, and economic losses” in natural disasters.

While the subject Minister was away, the country experienced its worst flood in 14 years; and to say that the authorities were unprepared for the calamity would be an understatement. Over 200 people have perished in the disaster that displaced an unprecedented half a million; and, in the absence of adequate measures by the State to mitigate the impact, individuals and private organisations have stepped forward to help those in need, going to great lengths to mobilise support and aid for the displaced families.

Days after the worst of the disaster has ended, the Government has stepped up its relief efforts, allocating Rs. 100,000 per death and Rs. 2.5 million as compensation for property damage. Rs. 2 billion will be distributed as soft loans for small and medium enterprises affected by the floods. While this is, no doubt, welcome news, sentiments have been expressed on social networks and elsewhere wondering whether it’s too little, too late.

The worst flooding in 14 years was accompanied by landslides that claimed many lives. Image credit: Roar/G. Gamage

Apart from the military braving the elements to rescue as many people as it could and private individuals helping out in their individual capacities, the Government’s response to the floods has been, fairly or unfairly, met with wide criticism. Reports emerged that the Ministry mandated to respond to such calamities was woefully unprepared for the disaster, lacking as it is in stocks of basic humanitarian needs such as blankets, life jackets, umbrellas, torches, etc.,  leading to questions on what happened to funds allocated specifically for flood and landslide management.

The Government has had to rely on foreign aid for its relief efforts, and all monetary aid received will be channelled towards rebuilding damaged houses. Among the foreign aid promised is: a commitment from Japan to donate emergency relief goods, AUD 500,000 from Australia in addition to a deployment of inflatable boats.  India has already sent three shipments of supplies, while Pakistan and Israel too came to Sri Lanka’s aid.  President Maithripala Sirisena has reportedly issued a directive to amend government circulars to improve efficiency and quality of immediate relief measures taken by welfare sectors.

The private sector too has contributed significantly. Dialog Axiata encouraged its customers to donate Rs. via SMS, promising to add Rs. 100 from its own coffers to be used in flood relief efforts, amounting to a total Rs. 33 million so far. (Last year, Rs. 15 million was collected, with Dialog adding a further Rs. 50 million). Takas.lk also raised up to Rs. 600,000 through its online campaign. Lanka IOC contributed Rs. 5 million this week, while the Sri Lanka Chamber of Pharmaceutical Industry stepped forward to help set up medical camps. Red Cross Society China donated USD 100,000 to its Sri Lankan counterpart for rebuilding efforts. Even the Dalai Lama has promised financial aid.

From the minute the news broke of the floods, volunteers took to social media to collect funds and dry rations, among other things, and the response has been overwhelmingly positive. From money collected by individuals and charity organisations, to calls for lunch packets, members of the public went out of their way to lend a hand. The response has been so strong that some are questioning the point of a Government mechanism at all.

An organisation known as Kindness Collective used the premises of printing solutions provider Anim8 as a collection coordination centre for aid received from various initiatives including Rotary Clubs and the Air Force. According to co-founder Jessica Fernando, the distributors sent their requirements to Kindness Collective after which the organisation would update potential donors on what was needed via social media and other avenues. “The distributions are done using by 4x4s, kayaks, motorboats, and helicopters. Our volunteers accompany these distribution processes at times too,” she said.

Asked how their experience working with the State machinery has been, particularly the Disaster Management Centre (DMC) and the amount of red tape involved, Fernando said that this year, they made a decision to not be directly involved with the DMC.

“We approached the relief camp sites through networking, as the DMC didn’t have the right numbers or emergency response plans activated in most of the locations that were in dire need. We approached the Air Force and got the necessary clearance to airlift a lot of relief to sites which, due to flooding and landslides, were difficult to reach by boats or roads,” she told Roar.

“Dealing with government institutions isn’t always the easiest of tasks. However, they were cooperative. They just didn’t have the right information from ground sometimes; nor were the disaster management plans in place executed efficiently,” she added.

Private media organisations, too, have mobilised the masses to come forward, though not without attracting criticism for using the opportunity to score PR brownie points.

Although one can argue that there is no harm in a private company using a calamity of this nature to promote itself as long as those affected end up benefiting from it, some see a more sinister motive behind it. Such self-promotion can de-legitimise the State’s role, which critics claim is part and parcel of ideological offensive against the legitimate role of the State in society and part of an alleged strategy in eroding public provision of public goods including education, health, social services and expanding role of profit-seeking corporates.

In the wake of the revelation that the Disaster Management Ministry was unprepared for the floods and landslide, Janeen Fernando of Parliamentary performance tracker Manthri.lk questions the fate of the Rs. 100 million allocated through supplementary estimates just this February. Details of how the money was spent, however, are not yet publicly available.

Given that Sri Lanka faced a similar catastrophe just a year ago, how is it possible that the State was caught by such surprise? Fernando believes this shows a serious failure in policymaking.

“The failure would appear, however, to be not just political, but also bureaucratic and reaching the local level too. We also found out through manthri.lk‘s dataset that the subject minister did announce a scheme of Rs. 500 million in the 2017 budget debates last December to support 144 disaster preparedness initiatives in each district via the district secretariats (Government Agents). If this scheme was actioned, then answerability should also rest at the level of each individual district’s bureaucracy,” he told Roar.

While the response of the private sector has been admirable, questions remain as to whether this is indeed the way forward, with many questioning the inadequacy of the State. Fernando, while appreciative of the enthusiasm, particularly from the many relatively young local firms in the tech industry taking an active role yet again, is skeptical of the sustainability of such efforts as an alternative to State intervention.

“The costs, both in terms of lives lost and property damage, is far greater when we are unprepared. It may be reasonable to expect public support in the immediate aftermath of a disaster but the Government needs to provide leadership in disaster management and pre-planning to mitigate its effects. This is something that would be hard to ‘privatise’. The public also needs to see a ‘return on investment’ for the billions allocated for that purpose each year,” he said.

In fairness to the Government, however, one could argue that it cannot handle a disaster of this magnitude alone and a collaborative effort with individuals and private organisations is needed. Fernando counters that it is fair to expect some immediate relief support, since the scale of this year’s floods is unprecedented in recent times.

“However, given past events and the large sums of money allocated, I think it’s important for the respective government bodies under the Ministry of Disaster Management such as the Disaster Management Centre (DMC) and the National Disaster Relief Services Centre and the officials in these institutions to provide answers as to their levels of preparedness and how they have utilised funds allocated to them,” he told Roar.

Relief items being collected and packed for distribution at the SLAF base in Ratmalana. Image credit: Roar/Muditha Katuwawala

Defending the authorities, DMC Deputy Director, Pradeep Kodippili, maintained that the Ministry was as prepared as well as it could’ve been. He told Roar that SMSs were sent from May 25 onwards, informing residents in areas under threat, in addition to informing the police and media of the imminent threat.

“We told them where exactly to expect floods. We got the police to announce in Galle and Matara,” said Kodippili, adding that the week before disaster struck, the Emergency Response Committee of the DMC met to discuss what to do in the event floods or landslides occurred.

“Before that, we sent letters to emergency responders asking them to pay special attention to the Nilwala and Gin Ganga rivers, among others, warning them that this year districts outside of Colombo could be affected,” he said.

According to Kodippili, the DMC even held flood drills in the area. He also claimed that 80 to 90% of the populations in flooded areas heard the warning messages issued by the Police.

“Ninety percent of the people evacuated. Ten percent got trapped. The media only focuses on that 10%, but not on the 90% that was evacuated,” he said.

Kodippili was also dismissive of criticisms that the Disaster Management Ministry was unprepared in terms of relief items.

“Things like mosquito nets, matchboxes are secondary items. Disaster Management Coordinating Units in all 25 districts were supplied generators, boats, rope, water pumps, life jackets, chainsaws, etc. A lot of these were given to the Army, Navy, and Police, too. Relief items are not stockpiled in large quantities due to expiry date issues, but a lot of our units have been provided with supplies. The stock at any given divisional secretariat is essentially our stock,” said Kodippili.

Lifejackets had also been given to all 25 districts as well as the Army and the police, he claimed, adding that some 7,000 life jackets were distributed among relevant institutes. The DMC had also given the Air Force 2,000 life jackets to air-drop into flooded areas.

“A stock of roughly 500 life jackets is maintained in each district. Then there are the boats. Seventy-two boats were given to the Army alone,” said Kodippili.

“We were prepared. Maybe there was a shortage of secondary items such as mosquito nets. But essential rescue equipment such as boats were available. That was the priority,” he added.

Another disaster, another blame game. The finger-pointing will continue for a while—at least until the news cycle picks up its next big story—and, as is often the case, everything will be forgotten till the next monsoon arrives. Will things finally improve for the better, with a more robust disaster management mechanism? Let’s hope we never have to find out.