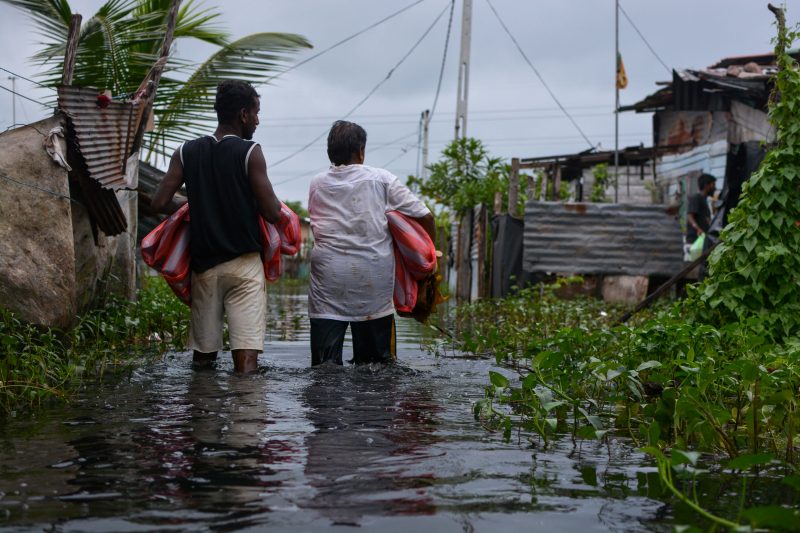 Thirty-year-old Malar sits by the door, listening in growing panic to the sound of rain on the tin roof. Her face etched with tiredness, she stares out into the Vijayakumaratunga ground in Kerawalapitiya from where she can barely make out her thatched roof home. It was only three-days ago that she gave birth there.

“We are in trouble,” her husband says, describing the ordeal of trying to save his family of four from the swirling floods that have submerged his town. Malar, her husband, and two other children aged 5 and 10, now survive on donated food.

They are among thousands of beneficiaries of the mass mobilisation of ordinary people delivering aid and medicine, an example of the self-reliance that continues to be evident throughout the country.

Nine makeshift camps have cropped up around Kerawalapitiya where there are 700 families scattered. They were used to one foot of seasonal flooding but this time it has risen to six feet after torrential rains caused landslides and flash floods across swathes of the country.

In Kerawalapitiya, 700 families are scattered across 9 temporary shelters

“My biggest concern is to prevent the spread of any diseases,” Major Randeniya, who oversees the camps, said. “Antibiotics, antifungal and topical treatments for skin infections are needed the most,” he said, pointing to children who were running through water in their bare feet.

Some of the women Roar spoke to say the children complain of having itchy skin, but they don’t know what medications to give them. It has been three days since they fled the floods, but they were yet to receive medical attention. If the Meteorology department forecast of rains for the next few days holds, the situation is likely to get worse.

Kerawalapitiya residents wade through flood water, carrying supplies. Authorities are concerned that exposure to flood water could result in the spread of disease.

Director General of Health Services, Dr. Palitha Mahipala, warns that conditions are rife for an outbreak or spread of water-, food- and vector-borne diseases, given that so many people wade through flooded waters to get to higher ground. “Water-borne diseases such as viral gastroenteritis, cholera, typhoid, hepatitis A and E, leptospirosis, are most likely to come up,” he said, adding that around 1,500 officials including doctors and nurses have been dispatched in teams to visit the welfare camps.

He added that they’ve begun fogging some of the affected areas due to the likelihood that vector-borne diseases such as dengue may spread. “Better sanitation, proper waste disposal, and providing safe drinking water are what we are looking to achieve at this point,” he said.

Referring to pregnant mothers, he added that women who are in the last trimester of their pregnancy are requested to get admitted to the nearest hospital. “We’ve began sending ambulances to the camps to see to it that these women are taken to hospitals. We also urge mothers who’ve just given birth to also seek medical advice.”

People have been advised to avoid wading through flood water as much as possible.

Health And Safety Tips To Keep In Mind:

Over 200,000 flood and landslide affected people are in camps across the country.

Oxfam, an NGO in Sri Lanka, says nearly 350,000 people are believed to be affected by the crisis. Of these, over 200,000 have been forced to seek shelter in 332 temporary locations such as schools and other buildings. It is likely to be up to seven days before they can return home.

Scroll down for more images from our visit to the Kerawalapitiya area today (May 21).

“I have lived here for 56 years, and I have never seen anything like this in my life.”
A young girl smiles when she realises her photo is being taken. Around her, people are glad to have a break from the rains.
Water levels may have receded, but are still nearly knee high.
An old woman and a baby. Authorities and relief workers are especially concerned about the health of the very old and very young.
A little girl finds something to smile about. Children have been advised not to play in flood water, which is more than likely to be highly polluted and dangerous.
Flood water can contain a mix of raw sewage, hazardous waste, and dangerous objects.