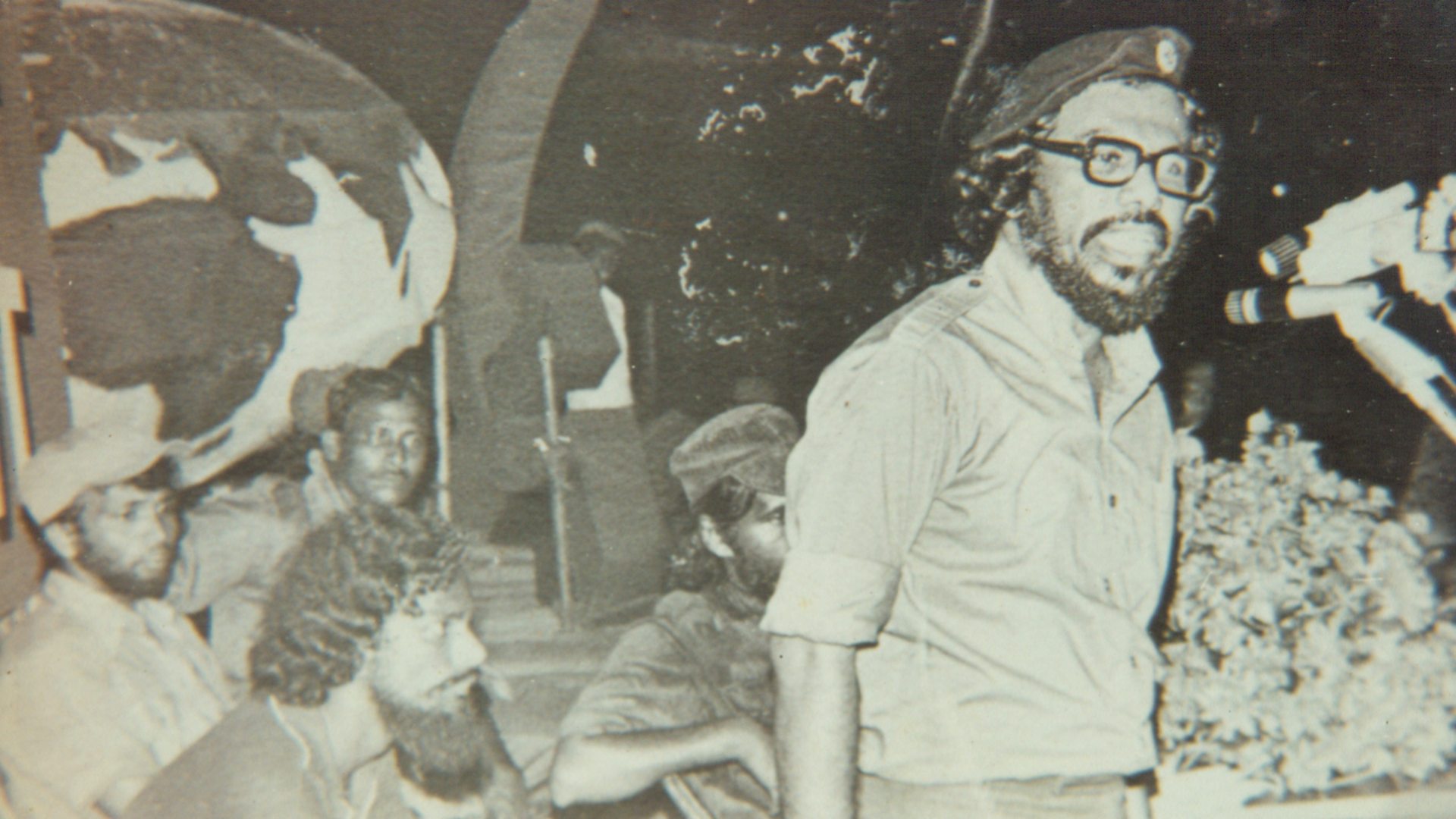 The relatively short yet colourful history of the more mainstream of Sri Lanka’s political parties and their respective leaders and the contributions each has made to the shaping of our tiny island nation as it stands today make for some fascinating ‒ and often revealing ‒ reading. This is an attempt to cherry-pick some of the more interesting and thought-provoking aspects of those varied histories.

DS and the  United National Party

The first ever ruling party of Independent Ceylon, the United National Party (UNP) is, for better or worse, the one that has arguably made the biggest impact on all spheres of life in the paradise isle. True to its name, the UNP has strived to maintain an ethnically diverse membership since its inception and over the decades has consistently been the single largest political party in the country’s history.

The following excerpt from the minutes of its inaugural meeting held on September 6, 1946, exemplifies this “united” attribute of the grand old party:

Hon’ble Col. J. L. Kotelawala who was convenor welcomed the members and read the letter convening the Meeting. He then invited Hon’ble Mr. D. S. Senanayake to occupy the chair.

Hon’ble Mr. D. S. Senanayake took the chair and addressed the Meeting and explained the aims and objects of the Party. He also emphasised the importance and the need for unity among all communities residing in the Island. He also appealed for goodwill and mutual trust and expressed the hope that the United National Party will be a strong political force in the country and will play a great part in moulding the future destinies of the people.

The following resolution “That this Meeting resolves to from a political Party to be called the United National Party ” was moved by Mr. S. Natesan, N.S.C. and seconded by Mr. T. B. Jayah, M.S.C. the resolution was put to the House and was carried unanimously.

The next resolution “That this meeting adopts the Manifesto and Constitution of the Party was moved by Mr. A. F. Molamure, M.S.C. and seconded by Mr. A. R. A. Razik, M.S.C., The resolution was put to the House and was carried unanimously.

Whether or not the UNP succeeded in “uniting all communities residing in the island” is up for debate, but it is no exaggeration that the party did indeed end up “moulding the future destinies of the people” one way or another.

Enough has been written about UNP founder-leader D. S. Senanayake (or the ‘Father of the Nation’ as he is sometimes referred to) and his and his party’s historic efforts to gain independence for British-occupied Ceylon. But what doesn’t get mentioned as often is the fact that Senanayake founded the UNP after resigning from the Ceylon National Congress in 1943 over differences in opinion about the nature of that very independence he and his elite friends had clamoured for. The CNC had resolved to agitate for full freedom from the British Empire. Senanayake, it turned out, preferred dominion status to a total pull-out by the Brits. On February 4, 1948, Ceylon was granted independence as the Dominion of Ceylon, and power was handed over to the UNP-led coalition government that had won the elections the previous year. This coalition, interestingly, included the communal Sinhala Maha Sabha founded by soon-to-be UNP nemesis S. W. R. D. Bandaranaike, whose controversial decisions as the populist fourth Prime Minister of Ceylon would have profound and far-reaching effects on the country and its populace that are felt to this day.

When Bandaranaike’s fledgling Sri Lanka Freedom Party (SLFP) rode to power in 1956 on the backs of the hitherto downtrodden sangha, weda, guru, govi, kamkaru forces (Buddhist priests, ayurvedic doctors, teachers, farmers and labourers), no one imagined in their wildest dreams that Solomon West Ridgeway Dias Bandaranaike, the quintessential champion of the Sinhala Buddhist cause, the Prime Minister of the People, would meet his untimely end just three years later at the hands of a saffron robed monk who embodied three out of five aspects of the so-called Panchamaha Balawegaya ‒ the very forces that got the Mahajana Eksath Peramuna elected by a landslide.

Talduwe Somarama Thero, an ultra-nationalist Buddhist priest who served as a lecturer at the Ayurvedic College, for his part, thought he was pulling that trigger for the greater good. As far as Somarama was concerned, he was simply doing the right thing for his country, by saving the Sinhalese from the traitorous Bandaranaike who, in his eyes, had betrayed the cause. Little did Somarama know that he was being used as a pawn in a sinister, far less noble scheme. As he emptied the magazine of the .45 Webley Mark VI revolver, he probably had no idea that he was carrying out the vendetta of a vindictive individual hell bent on getting back at Bandaranaike for a shady business deal gone awry.

That individual was a Buddhist monk himself, though one far more powerful and conniving than the naive Somarama: Mapitigama Buddharakkita Thero, the then influential Chief Incumbent at the Kelaniya Raja Maha Viharaya, without whose support the MEP government would never have gained power as easily as it did. More megalomaniacal business tycoon than priest, Buddharakkitha was, according to journalist D. B. S. Jeyaraj and others, was resentful of the Prime Minister ‒ the same one he had helped install ‒ for two reasons: the latter’s refusal to hand over a lucrative shipping contract to Buddharakkitha’s associate H. P. Jayawardena to import rice from Burma and Thailand, and for denying him an equally profitable sugar manufacturing license.

Barely a year had passed since the 1958 anti-Tamil riots, and suspicions were raised that the assassin had been a Tamil man disguised as a Buddhist monk. But swift action by the government ‒ ably guided by forward thinking Governor Oliver Gunatilleke ‒ to get the word out and have police on standby prevented what might’ve been another unfortunate incident in the country’s already sordid race relations.

A highly publicised trial that spanned several years following the demise of Bandaranaike saw the culprits taken to book, for the most part. Somarama, Buddharakkitha and H.  P. Jayawardena, among others, were eventually sentenced to death for conspiring to assassinate Bandaranaike. Buddharakkitha and Jayawardena managed to escape the death penalty, however, thanks to a legal loophole that prevented those accused only of conspiracy to murder from being sent to the gallows. In a gross miscarriage of justice, each was sentenced to life in prison instead. Somarama, who by this point has left priesthood, was not so lucky. He was hanged on July 6, 1962. Just weeks before his hanging, Somarama reportedly converted to Christianity, perhaps seeking repentance for his actions.

Somarama Thero being led away from court after his conviction. Image courtesy sangam.org

JR and Ceylon’s Defence of Japan

There is a popular belief that J. R. Jayewardene, the second president of Sri Lanka (first executive) is, to this day, venerated almost religiously by the people of Japan for the part he played in re-admitting the former Empire of the Sun to the international community. While there is no way to substantiate this claim with irrefutable proof (barring a statue in Tokyo erected in his honour), there is no denying that JR ‒ or at least a particularly emotive and well-written speech of his ‒ played a decisive role in Japan’s finding its place in the “civilised” world.

The second World War had just ended, and Japan, battered and bruised, was finding itself increasingly isolated globally, with the rest of the world refusing to give it a pass for what they deemed its gruesome atrocities. Many nations, with the backing of the Allies, insisted on rigidly enforcing the terms of surrender imposed on Japan in order to “break its spirit.”

Ceylon was one of 48 countries that were signatory to the Treaty of San Francisco that came into effect on April 28, 1952, officially ending Japan’s position as an imperial power, demanding compensation for its war crimes and bringing about an end to the the Allied occupation there. The Ceylonese delegation to the Treaty conference was led by then Finance Minister J. R. Jayewardene, who made a moving speech defending and calling for a free Japan ‒ a magnanimous act on the part of Ceylon, given that it had just cause for punishing Japan for its multiple air raids on the country. He even went to the extent of refusing to accept payment of reparations from Japan, pointing out that it would harm the latter’s economy irrevocably.

An excerpt from JR’s speech which was reportedly met with tumultuous applause:

“We in Ceylon were fortunate that we were not invaded, but the damage caused by air raids, by the stationing of enormous armies under the South-East Asia Command, and by the slaughter-tapping of one of our main commodities, rubber, when we were the only producer of natural rubber for the Allies, entitles us to ask that the damage so caused should be repaired. We do not intend to do so for we believe in the words of the Great Teacher [Buddha] whose message has ennobled the lives of countless millions in Asia, that ‘hatred ceases not by hatred but by love’.”

The concluding part was particularly noteworthy:

“This treaty is as magnanimous as it is just to a defeated foe. We extend to Japan the hand of friendship and trust that with the closing of this chapter in the history of man, the last page of which we write today, and with the beginning of the new one, the first page of which we dictate tomorrow, her people and ours may march together to enjoy the full dignity of human life in peace and prosperity.”

The revolutionary founder of the Marxist (not really) Janatha Vimukthi Peramuna gets a bad rap, for obvious and very justifiable reasons. But in 1978, five years before militant Tamil youths took up arms against the State, Rohana Wijeweera was in Jaffna, where he had previously been imprisoned in the wake of the 1971 insurrection, and said the following in a public rally:

“We accept Leninism ‒ that any ethnicity has the right for self-determination. But we say to the minorities of this country, since we can guarantee that the injustices faced under a bourgeois government will never be present under a government of the proletariat, dividing the country in half is not the solution the national question.”

No sooner had he uttered these words, an object ‒ ostensibly a stone ‒ was thrown straight into Wijeweera’s face. The injured JVP leader, bleeding profusely from his nose and forehead, didn’t waver. He continued to give a rousing speech on increasingly escalating ethnic tensions to the predominantly Tamil audience.

By all accounts, Wijeweera was a charismatic and eloquent leader who was able to pull large crowds wherever he spoke. Image courtesy BBC

“Comrades,” he said, “this is the first time since we were attacked by the CID and police that something like this happened. This sort of thing can only be done by a person ignorant of politics and is engaged in terrorism.”

After a few choice words berating the attacker and what he represented, a decidedly rejuvenated Wijeweera went on to spell out his party’s proposed solution to the ethnic conflict, harkening back to his days in Jaffna prison, where a near-naked Wijeweera was clothed by his Tamil cell mates:

Politics of Sri Lanka is riddled with tales of intrigue and fervour similar to those mentioned in this article – which barely scratches the surface of the country’s rich post-independence history. If you know any similar stories and anecdotes we may have overlooked, please do share in the comments.