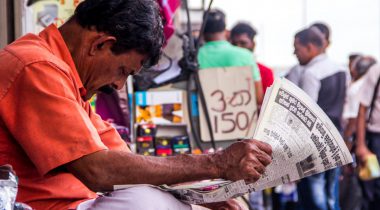 Sri Lankans are not entirely unfamiliar with the word “defamation”. You do hear, for instance, news of one politician suing another for millions of rupees over something that was said by the latter politician, which the former found offensive or unpalatable. Most Sri Lankans are therefore aware that “defamation” is some kind of limitation on the freedom of speech of another – a tool to prevent verbal diarrhoea of sorts.

This tool is also facing the ultimate test, with social media platforms such as Facebook becoming a form of media more powerful than any seen before. Individuals and entities are criticised, even insulted, on a daily basis on social media, as if there would be no repercussions. However, even without Facebook imposing its own regulations, these individuals can be sued, for millions, using the centuries-old law: the law of Defamation.

The “Tort” Of Defamation

Before moving on to the technicalities of suing your friend (or enemy) for a comment he/she made on Facebook, it is necessary to understand the roots and principles of this law. Defamation is a ‘tort’ – which is an umbrella term used to describe the laws governing civil responsibilities that people have to one another, as opposed to those responsibilities laid out in contracts. If an act committed by someone unfairly causes someone else to suffer loss or harm, it can be said to result in ‘legal liability’ for the person who commits the tortious act.

Examples include private nuisance (leaves from a neighbour’s tree clogging your drains), negligence (dropping a hammer on someone), occupier liability (having a slippery floor in a restaurant) ‒ and defamation. Torts are not necessarily part of written law, like acts or statutes of parliament, but legal constructs which are enforceable in civil courts.

The tort of defamation, put in simplest terms, is committed when a person intentionally makes a false communication that harms another’s reputation. It is divided into two categories:

Defamation was also a criminal offence in Sri Lanka and provided for a two-year jail term under the Penal Code until 2002, when it was repealed by the then Ranil Wickremesinghe government. Sri Lanka is the first and only country in the South Asian region to have done away with the law of criminal defamation.

Freedom Of Speech And Defamation

While some argue that Defamation is at direct conflict with freedom of speech of an individual, it is important to note that freedom of speech as a fundamental right is not without limits. The Constitution of Sri Lanka itself, while granting citizens the right to freedom of speech, specifically states that this freedom shall be subject to “such restrictions as may be prescribed by law in the interests of racial and religious harmony or in relation to parliamentary privilege, contempt of court, defamation or incitement to an offence.”

The Elements Of Defamation

Although (as explained above), defamation has two categories based on its form, in order to pursue a successful suit in defamation, the following are considered to be essential elements:

Defamation does not always have to be direct; it could even be defamation by “innuendo” which basically means that even a “hint” can be considered defamation as long as a fair number of people will understand what was hinted at.

Defences Against The Suit Of Defamation

While defamation may well be a headache for reporters and media institutions, there are also certain defences that do defend a claim of defamation. The main such defences are:

A claim of defamation should necessarily contain the words spoken or written verbatim (reproduced in writing). It is also necessary to send a letter of demand before a claim is brought to court. The general claims for defamation in Sri Lanka usually start at over Rs. 50 million.

Another important factor in a defamation claim is the place of publication, which, in the typical case of a newspaper, is deemed to be the place of printing. In case of a particular article of a newspaper being established as defamatory, the writer of that article, the editor of the newspaper, and the newspaper company are generally assumed to be liable for defamation unless proven otherwise.

A claim in defamation has to be instituted in a District Court where the defendant resides, or where the defamatory material was published.

In some cases, it may be possible to sue someone over defamatory comments made via social media – provided, of course, you have the grounds to do so. Image credit: thesource.com

Given the above framework of the law of defamation, it is now possible to consider whether someone can sue another over a comment or “status” published on Facebook about them. Although still not attempted in Sri Lanka, it is technically possible to make such a claim since the act of sharing a defamatory status (if proven to be so) has the effect of “publishing” defamatory material to an audience of thousands (depending on privacy settings).

However, innocent “sharing” of defamatory material without knowing such material to be defamatory may not bring any liability under the above-mentioned defence of innocent dissemination.

While defamation seems like a tool to curtail the right to freedom of expression, Sri Lankan reporters and newspapers have a rich legal history of fighting such suits to safeguard media freedom and freedom of speech. No one should hesitate to express their opinion or report a truthful story for genuine intentions for fear of being sued, as doing so would lead to an ignorant society.