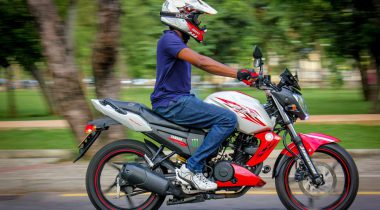 Full Face Helmets: To Ban, Or Not To Ban?

In February 2017, the Sri Lankan government released a gazette regarding revised helmet regulations. As per these regulations, a controversial full face helmet ban remains in place, in spite of calls to do away with it.

Two years ago, the Attorney General announced to revise Gazette No. 644/26 of January 11, 1991, and remove the ban imposed on full face helmets. Despite this, the respective authorities announced that the ban will remain in effect. This confusion sent ambiguous messages to the motorcyclists.

The supposedly revised gazette of 2017 also doesn’t include the promised revision, thus sparking a considerable amount of outrage among motorcyclists.

Police authorities claim that the Protective Helmet Regulation is a matter of public safety ‒ but motorcyclists argue that this regulation endangers their safety.

A Timeline Of The Issue

Initially, in 2013, a ban was proposed against helmets with tinted visors. Subsequently, another regulation was approved to ban ‘full face’ helmets in 2015. The latter was suspended by an interim order as a result of an appeal made by the Ceylon Motorcyclists Association (CMA). As per the respective authorities, this rule has been imposed in order to reduce the numbers of criminal activities allegedly orchestrated by motorcyclists wearing full face helmets.

The New Gazette: A Breakdown

The Motor Traffic (Protective Helmets) Regulations No. 02 of 2017, clause 4, states that “When a protective helmet is worn, no part, extension or attachment thereof, shall obscure, conceal, or distort any portion of the face of the wearer.” Full face helmets come into direct violation of this, as they obscure the forehead, chin, and cheek areas.

The regulation also states that every person who rides a motorcycle or is carried on a motorcycle should wear a protective helmet at all times, and that it should be fitted with a visor not made of a tinted or coloured material, and should expose the face area without obstructing the peripheral vision.

Similarly, Gazette No. 644/26 of January 11, 1991, also states “That when worn any part, extension or attachment thereof obscures, conceals or distorts any portion of the face between the eyebrow and the chin”.

It should be noted that during a collision, the jaw area of the motorcyclist is often subject to the most impact. A full face helmet ensures that the motorcyclist gets the utmost protection from the collision.

Confusion could have been avoided if the gazette had properly defined the term “Protective Helmet”. As it stands, the clauses mentioned in the respective gazette appear to contradict the sole purpose of the regulation, which is to ensure the safety of the motorcyclists.

The Sri Lanka Police claims that wearing full face helmets has an impact on the rapidly increasing crime rate in Sri Lanka. But the question is, are they willing to jeopardise the lives of motorcyclists in order to curb the crime rate?

According to statistics from the Ministry of Transport and Civil Aviation, motorcycles fell victim to the most number of accidents in 2015, and of all road accidents, those involving motorcycles had the highest fatality rate in 2014. On March 5 this year, the Ceylon Motorcyclists’ Association (CMA) held a protest against the ban on full face helmets. In the light of the protest, Assistant Secretary to the President, Chathura Liyanagunawardena, had stated that the protestors will be receiving an audience with the President on March 8.

When Roar reached out to the CMA’s Secretary, Chirantha Amerasinghe, he said that they had not received the promised audience on the aforementioned date. As per the updates given by the Presidential Secretariat to them, this issue has been taken to the President’s notice and the President himself will handle this issue with the respective parties. Amerasinghe also expressed discontent on how the Minister of Transport, Nimal Siripala de Silva, chose to handle the situation.

The CMA says it had contacted the Presidential Secretariat again, only to receive the same response as before. “It seems that there are problems with scheduling an audience with the president due to his busy schedule,” said Amerasinghe, adding that, “if this was a bus or a three-wheeler union strike, then the President would have responded immediately.”

Amerasinghe said he had also requested Dr. Sisira Kodagoda, Chairman of the National Council for Road Safety, to attend a public debate, but hadn’t received a response.

The CMA has also lodged a complaint with the International Monetary Fund, requesting to review and assess this situation. They claim that if this law gets implemented, it’s bound to have a direct impact on the Sri Lankan economy.

Amerasinghe also stated that the Government should consider the fact that most of the young working population in Sri Lanka use motorbikes for transport Around 8,000-10,000 motorcycle accidents occur every year in Sri Lanka. The CMA believes that the effective protection for a motorcyclist is the full face helmet, which protects the whole face and absorbs the impact of the collision. “A motorcyclist who financially supports his family cannot afford to be injured. It will cripple the respective family, both emotionally and financially. It should also be noted that foreigners who hire motorbikes from locals might also face a similar fate,” Amerasinghe said.

He also expressed concern regarding Sri Lanka Standards (SLS) certifications, claiming that the SLS doesn’t have enough manpower, technology, or methodologies to certify helmets. “While assessing a helmet’s quality, ten tests should be carried out. It’s a known fact that the SLS has to do three of these tests abroad because they don’t have the required technology, he said, adding that “Even if consumers buy an SLS-certified helmet, how can they be certain if it’s truly SLS certified? The helmet merchant might get the certification from SLS and sell a non-certified helmet with an SLS sticker.”

Amerasinghe said that the CMA intends to give the government some time to respond to their appeal. “But if the appeal gets disregarded, then within few months another protest will be held in Colombo. The CMA is not against the government or the SLS Standards; the CMA wants the government to listen to the people’s voices and provide a reasonable solution to the problem,” he said.

“The CMA questions the purpose of this [latest] gazette. We are also concerned that the responsible authorities didn’t adhere to their promise [to amend the existing gazette]. We want the government to listen to their problems and take the necessary steps to provide a solution.”

What The Motorcyclists Say

Motorcyclists whom Roar spoke to also expressed opinions that were in favour of full face helmets. Dr. M. Nisankaprasad, currently working in the Central Province, says that he has to be cautious while travelling in hill stations, especially at night and on rainy days, and that full face helmets provide the necessary protection. He added that:

“Earlier last month I met with an accident while travelling on my bike. Because of the full face helmet I didn’t get any injuries to my head and face. Banning these helmets will definitely increase the fatality rate of motorcyclists.”

“My wife and I travel on a motorcycle to our work. Both of us wear full face helmets. Travelling in Colombo traffic is a nightmare. All the smoke and dust is very damaging to our health. Our helmets protect us from the smoke and dust.

Due to our financial situation ,we cannot afford a car, so we opted for a motorcycle. A good quality helmet costs around LKR 11,000 – 18,000. If these rules keep on changing we will not be able to buy multiple helmets.”

Another motorcyclist, Dr. Mariano Rubarajan, believes that the ban is ‘unnecessary’, for two reasons:

What are your thoughts on the full face helmet ban? Let us know in the comments below.