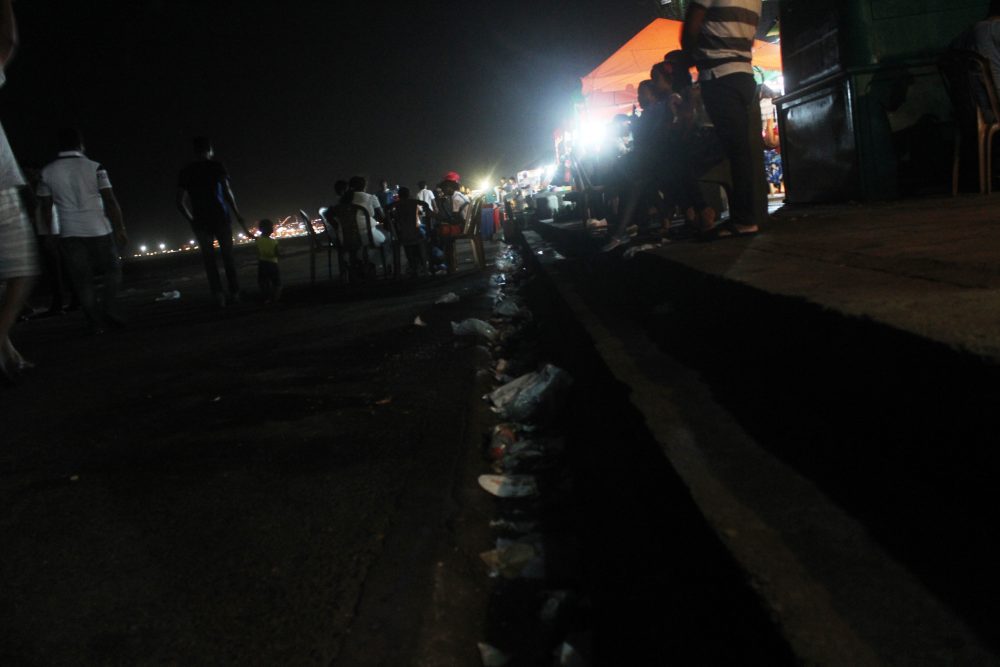 To most people of Colombo, the Galle Face Green is a place to hang out at. It’s where you go for isso vadey, or to fly kites, or catch the sunset on your way back from work. To tourists, it’s one of those mandatory-places-in-Colombo-you-must-see. In short, it’s a very integral part of Colombo life. But in spite of this ‒ or more likely because of this ‒ come evening, Galle Face faces a rather nasty little problem.

Whether you enter Galle Face through the steps or through the side next to the Galle Face hotel, this is one of the first sights that you will be greeted with.
These water tanks are left in the far corner of the Galle Face Green and furthest from any vendor, yet there is garbage strewn across the ground.

Welcome to Galle Face Green, the promenade of trash.

Now, if one were to look up Galle Face on the interweb, you would find this description of it:

‘’The Galle Face is a five hectare ocean-side urban park, which stretches for a half kilometre along the coast, in the heart of the financial and business district of Colombo, Sri Lanka. The promenade was initially laid out in 1859 by Governor Sir Henry George Ward… The Galle Face Green was initially used for horse racing and as a golf course, but was also used for cricket, polo, football, tennis and rugby.’’

Unfortunately, in its current state, the Galle Face Green isn’t green at all; it is strewn with garbage, which accumulates all day and is the worst at night. From the moment you enter, from all sides except that of Dutch Hospital, you are greeted with the cool breeze of the ocean, the sounds of children playing, and the smell of piss, while around you, ice cream wrappers flutter through the air.

One of the many restaurants that dot the walkway. I would like to point out that I used to eat here quite frequently ‒ until I saw a gentleman there sharpen a knife on the steps right next to the bins.
A stray dog sits next to a table trying to get some scraps from the family dining there. Though I’ve never seen any rats myself, it would not be surprising if, given how much waste there is on the ground and in the bins, they come out the moment the hustle and bustle of Galle Face dies down.
Another angle of Galle Face: not everybody looks down, but if you did, you’ll realise how much waste is left behind.

Once you have made your way across the dirt and dust that has been zealously called the Galle Face Green, you trail your way towards the beach where you can grab something to eat. There are many options to choose from. Unfortunately, they are also some of the reasons for all this clutter.

This isn’t to say that there is no hope; there are people who try and do something about all this waste. There are plenty of shopkeepers who store their daily garbage and keep it to the side so it can be collected when they close shop. And there are people who walk the distance to make sure their plates go into the bin once they are done. And yet, it’s hard not to notice piles of garbage at every corner, being picked up by the wind and hurled your way. As I walked around Galle Face these last few nights, I had to duck twice to ensure that I wouldn’t get hit in the face with ice cream bar wrappers, and one lunch wrapper with what I hope was chocolate smeared on it.

A street vendor tosses his garbage on the floor. He actually noticed me photographing this and asked me what it was for. When I told him that what he did was wrong, he swore and walked off.
One of the few instances when shops hold on to their daily trash to give to the cleaners at night.
A young boy who came down the ramp to put away his paper plate. It’s a pity a lot of the adults don’t seem to have as much sense.
What was once a home to a tree now is now filled with trash.

Colombo used to be known as a green city, and when I was young my father would regale me with stories of how one could walk down Gregory’s Road during midday and not be touched by a single ray of sunlight. Although I now understand that could have been an exaggeration, it saddens me to think what we have traded that for. And since growth means change, and old trees will disappear, the least we could do is keep Colombo green via responsible waste management.

On busy days the bins behind most vendors quickly fill up.
Ice cream wrappers litter the roadside and sapling trees. Though the waterfront has many bins, they seem to be too few and far between near the road.

This isn’t to say that Galle Face is overrated, or that if you want to enjoy a good meal you have to spend thousands of rupees and avoid street vendors. We can go ahead and enjoy Galle Face the same way generations before us have ‒ flying kites, having family picnics, enjoying the occasional achcharu or isso vadey ‒  so long as we clean up after ourselves. Too long have we lived with the notion that it’s someone else’s responsibility to pick up after us. And in the wise words of Javert: “We will nip it in the bud.”

Another sapling, another man’s dustbin.
Two children sit in-between dustbins while they play blissfully on their parent’s cell phone, seemingly oblivious to the hygiene nightmare surrounding them.

In my time teaching, I worked with quite  a few schools, and I know that they do teach children to clean up after themselves… But I don’t know if this will be enough. One school, in particular, gave each year group the responsibility to clean the canteen every week. If you are a parent or a teacher, or just someone who has someone looking up to you, teach them to go that extra 100 metres to throw away their chewing gum wrapper. Ask them not to spit on the road, or to throw things out the car window, because before you know it, it will be too late. If the law won’t enforce it, we as citizens should.