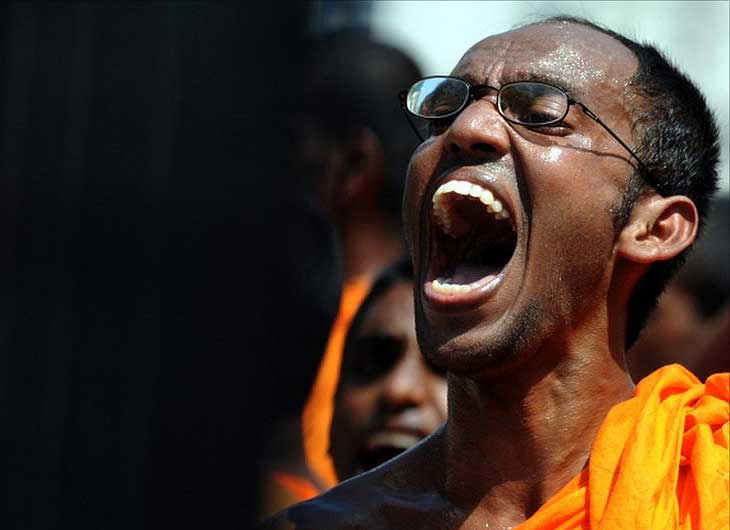 While the nearly three decade war, instigated by racial unrest, may have come to an end, the country’s post-war era hasn’t painted a picture of peaceful coexistence, either.

In 2014, the Aluthgama- Dharga Town incident drew attention to hardline Buddhist extremists, specifically the Bodu Bala Sena (BBS), after the group was connected to attacks on the area’s Muslim community.

Although we haven’t experienced the kind of unrest following the Aluthgama incident, a number of racially motivated disturbances that have taken place over the last two years have given rise to concern, despite the change in the government.

Private property that was defaced by the “Sinha Le” advocates earlier this year. Image credits: asianmirror.lk

Questions have been raised as to whether these were isolated incidents, or the work of one organised group. For instance, in January of this year, some Muslim owned houses were reportedly vandalised when gates were spray painted with the word “Sinha Le.” This was soon identified to be the name of an organisation which entered the mainstream through a sticker campaign, only to evolve into an organisation with a full blown racist agenda.

Not A One-sided Deal

Concerning groups who create racial unrest, it wouldn’t be right to point all fingers in only one direction.

Meanwhile, on November 15, an individual named Dan Priyasad, claiming to be the “Saviour of the Sinhalese” was arrested by the Fort Police under charges of instigating racial violence and hatred. He had threatened to “bomb the Muslims” to save the Sinhala race. The suspect was later produced before the Fort Magistrate’s Court and remanded until November 25.

In immediate retaliation, the BBS General Secretary threatened to attack the majority Muslim suburb of Maligawatte if the IGP failed to arrest Razik.

Muslim protesters in Colombo burning an effigy of Barack Obama in 2012, after an anti-Islam video was released. Image credit: bbc.com

When Roar contacted Gnanasara Thera, he said that Razik was arrested after a complaint made by the BBS.

“This man has insulted the Triple Gem. He had organised a protest in Maligawatte when we decided to step in. He even insulted and threatened me. I wasn’t in the country. I was in India, so a spokesperson from our organisation made a complaint against him along with some others,” he said.

Although many people welcomed the arrest (a number of organisations, including the Muslim Council of Sri Lanka, had condemned the comments made by SLTJ’s Razik), questions were raised as to why the police had not responded earlier, and instead acted only after the BBS had made their threats.

Furthermore, the BBS General Secretary has claimed that while Priyasad’s methods were incorrect, his words had a point.

“We have a very good aim. That Sinhala youth who was arrested, as well as thousands of other youth and monks, are distraught when they witness what is happening today,” said Gnanasara Thera, adding that, “We don’t have a proper Sinhala leader. All the politicians are divided. It is as a result of such a society that youths like Priyasad are born. What he said was wrong, but it makes sense,” Gnanasara Thera told Roar.

Several buildings and other public property were destroyed during the 2014 Aluthgama Incident. Image credit: colombotelegraph.com

The bottom line is that most of these groups claim their actions ‒ and their words ‒ are all for a greater good. They genuinely seem to believe, or at any rate want people to believe, that they are acting “for the love of our country”.

Gnanasara Thera himself admitted that the BBS does spread racial hatred.

“It is true that we spread racial hatred and insult other religions. But we do that with the utmost sincerity and benevolence. A Sri Lankan Buddhist has not in any part of the country attacked or chased out anyone without just cause. We haven’t ever tried to convert anyone to Sinhalese. Yes, we sound threatening. But we use only words,” he said.

Words, however, are nearly always the primary inciters of violence. For us Sri Lankans, the incidents that led to our bloody, long drawn out conflict ought to have taught us that by now.

What should be noted is that although the BBS General Secretary was arrested and remanded earlier this year, it was not for his racist rhetoric, but for obstructing court proceedings and other offences related to the Prageeth Eknaligoda case. While Gnanasara Thera is infamous for his racially offensive remarks and anti-Muslim agenda, no action has ever been taken against him in this regard.

Nor is he the only extremist monk who has been seemingly ignored by the authorities. Ampitiye Sumangala Thera from Managalaramaya, Batticaloa, gained overnight infamy when he yelled at a Grama Niladhari officer recently, calling him a ‘Tamil Tiger’.

Video footage of the incident captures his behaviour towards the Pattipalai area Grama Niladhari, S. Jeevithan, where he yelled racist comments and used foul language, during an argument over a land issue in the Pattipalai area. The monk’s overall unruly conduct was also revealed when he destroyed a cornerstone bearing President Maithripala Sirisena’s name.

When Roar contacted the police in order to inquire why action has not been taken against these individuals, the police said that a viable complaint has to be made against the perpetrators for action to be taken.

Recently, however, President Maithripala Sirisena had instructed the IGP and Chiefs of Security Forces to arrest all those who incite racism. This order was given after Minister Mano Ganesan brought attention to Ampitiye Sumangala Thera’s actions.

A Call For Action

A recent civil society petition has called upon the Inspector General of Police to immediately arrest those who incite racial hatred and engage in overall disruptive behaviour.

The letter calls for the following Police action regarding recent incidents:

(1) Immediately arrest Gnanasara himi for the statements he made on 15 November 2016, which fuel communal tensions and expressly threaten and incite violence against ethnic and religious numerical minorities. There is adequate evidence in the public domain about Gnanasara Thera’s previous conduct, and he is already involved in legal proceedings about the threat to repeat Aluthgama he made in June 2016.

(2) Immediately arrest Ampitiye Sumangala Himi from Managalaramaya, Batticaloa for his numerous racially charged abuse and violence, and on many occasions, acting with complete disregard for the law, as is quite indicative in the footage we’ve provided above.

(3) Investigate the actions of all other extremist groups and persons and take necessary action under the law.

(4) Update the public on the status of the complaint made by the Muslim Council of Sri Lanka (MCSL) on Gnanasara himi’s threat to repeat Aluthgama.

(5) Inform the public on the steps taken to prevent future incidents that are likely to incite racial and religious violence by groups that propagate hate-speech and threats of violence against ethnic and religious numerical minorities, in particular those led by Buddhist monks due to the privileged position and immunity they hold in society.

A group protesting against the BBS activities. Image credit: vice.com

What is distressing is that despite the call for action by several civil societies and the President himself, and in spite of the few arrests that have been made, the fact remains that some of the main instigators of racial unrest still continue to fan the flame of unrest, undeterred.

So on one hand you have the President calling for the immediate arrest of those who incite racial unrest, but on the other, you have groups that have, with impunity, continued to threaten the country’s tenuous peace for several years now.

The message this gives out, not just to groups that feel vulnerable, but also to those at the helm of such vituperative propaganda, is that such acts are pardonable and even condoned.

There is no doubt that a great many Sri Lankans refuse to subscribe to either the outright hate speech or the underlying fear mongering that has been spreading in recent times. But the right approach and  action needs to follow, because extremism of any kind is everyone’s problem.