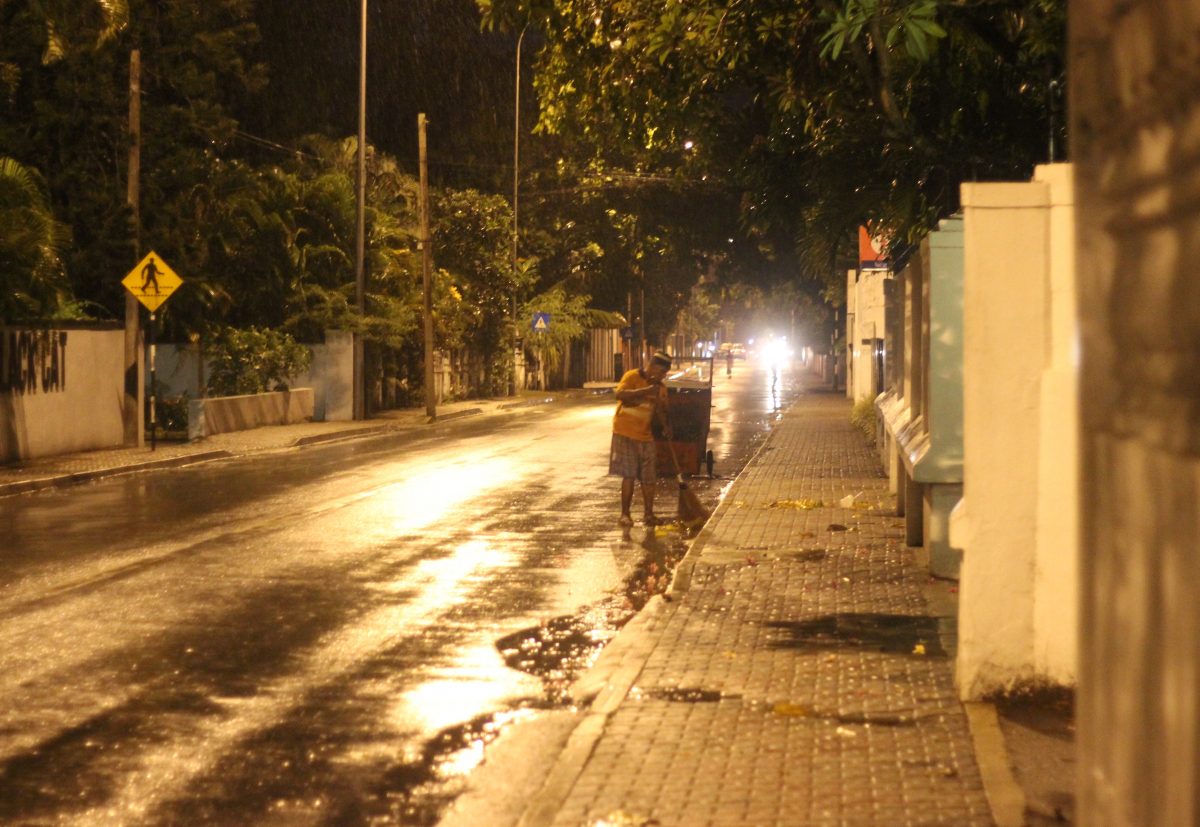 As the rain falls on these monsoon months, the distinct scraping of idala against cement is heard along Wijerama Mawatha in Colombo 7. An old man, past the age of sixty, is sweeping the street. His orange t-shirt should make him stand out against the white marble walls of embassy houses. But with the tungsten street light illuminating the path he sweeps, the orange t-shirt only hides him in plain sight.

The man is M. Amaradasa, and this has been his route, for the last few years. As most of us sleep, he works, keeping the road spotless for us never to notice the next morning. Now sixty-eight, he continues to sweep, not noticing me as I approach. “Suba Raththriyak,” I say as I approach, and he looks up and steps aside to let me through, only to be surprised when I don’t.

M. Amaradasa has been working this route in one of Colombo’s most exclusive suburbs, for a few years now.

I speak to him for a while, and he seems happy to take a small break. I ask him if it was okay for me to talk to him. The night is cold and the rain persistent; not an environment for men young or old to be standing in, so we move to the shelter of a roadside tree and began to talk. And this is what he told me:

Amaradasa has been doing this for a while, and thanks to his job he has been able to take care of his family and continue to do so. Both his children are now grown up, are well off, and he is happy for them. His son, who now lives in the UAE, fixes air condition units, and his daughter is married and living at home.

Though the stench of the grime sticks to his clothes, it does not follow him home, he says proudly.  “There is no shame in working hard at an honest job,” he says, smiling.  What he calls ‘an honest job’ pays him Rs. 750 a day for 5 days a week, and he starts his day at the collection depot. Once he gets there, he takes his cart and travels to Wijerama Mawatha, where he starts at one end and sweeps all the way to the other end, and when he gets there he turns around and sweeps again the other way.

Amaradasa sweeps the corner of Wijerama Mawatha and Ward Place. Having just finished with our interview, he goes back to making up for lost time.

This has been Amaradasa’s evening for the last 5-6 years. Once he finishes sweeping the street, he waits for the pickup via a garbage truck and then heads back to the depot to drop off his cart and go back home. All of this takes eight hours, from dusk to 2:00 a.m. in the morning, at which point he goes back to his home in Wanatamulla. I left Amaradasa to his work, and as I walked away the sound of the idala started to echo through the empty street. Before I left I asked him if I could buy him some tea, or biscuits for indulging me in conversation. But he politely refused and said that in the years he has gotten used to not eating, and that he would have a hot tea waiting for him at home. And as I walked away I knew that come tomorrow, Amaradasa will be here to start next evening to repeat the cycle and clean up again after us.

As I continued to walk the streets, I moved towards Pettah, and it was there that I met Mr. Anonymous, a middle-aged man. He smiled and nodded as I walked over, but when I asked if I could photograph him, his smile dissipated. Realising I needed to diffuse the now tense situation, I spoke to him for a fair while. And he told me why he did not want to be identified.

Unlike some of the other street cleaners I met, Mr. Anonymous had a day job and in a bitter turn of irony, his day job involved working at the CMC (Colombo Municipal Council). He took up this street cleaning job to pay off loans that he had taken over the years. Although living in Kandana, he travels to Colombo every morning. After finishing his work sweeping the streets, he heads back home, when it is time to pick up his children and drop them at school, after which he sets off  to his day job with barely a break in between.

Parked on the now deserted streets of Pettah, is the garbage cart pushed around by Mr. Anonymous as he goes about his job.

Mr. Anonymous looked up and surveyed his surroundings, and started to sweep as he continued talking. “The boss from office might come and see me talking to you,” he says. The “Boss” in question is an office administrator who travels through the street at night observing the work of their employees. “And if not the boss from the office, the police also checks up on me.” Taking this as a signal I decided to move on through the streets of Pettah looking for others to talk to.

A group of men cleaning the streets of Pettah.

Before I left, I asked Mr. Anonymous if there were others nearby and he said inside Pettah there are larger groups, and when I finally asked if I could have one photo of him, he agreed.

In the heart of Pettah, the grime and rubbish shone in the rain. It was here that I met two men working fast; one of them pushed the cart through the deserted streets while the other picked up the little packages of rubbish that had been left there by shopkeepers or others.

Wickramasinghe and Chandrapala, hard at work in the heart of Pettah.

Wickramasinghe and Chandrapala are partners. Wickramasinghe was on his first week of training and had taken the job after coming into Colombo from Ganemulla. Though the hours were long, he was happy knowing that his job as a street cleaner for a private company gave him EPT/ETF (while CMC workers receive a pension) and he will be able to collect it in a few years. Chandrapala however, now sixty-seven, had already collected his and resumed working again shortly afterwards.

Chandrapala, sixty-seven, watching out for the garbage truck.

As our conversation continued, Wickramasinghe shouted from the across the road that the garbage truck could be seen in the distance, and with a nod of his head Chandrapala crossed the road and the two men continued on their way.

As we went our opposite ways, I moved towards the lights of the garbage van. Its fog lights illuminated the empty pavements of Cross Street.

Hard at work while the rest of the city sleeps.

Cross Street, the main artery of Pettah during the day, had been drained of people and now lay empty, except for a group of six men, working as if death itself was at their heels. I asked why they worked in such haste. They replied that “the rains were coming”, and as this was said, it did begin to rain. The rain momentarily quelled the smell of garbage, but it was back after a while and engulfed us whole.  I noticed how the men worked without gloves, and wore slippers while their feet and bodies were rinsed with the waste water that drained from each pile of garbage.

These men said nothing more, but one by one each one took turns for mere moments in between their work, to preview the photos I was taking of their colleagues.

Once they had picked up the packets of rubbish from the floor, they swiftly moved on down the road to illuminate another part of the empty Cross street.

Few people register the orange-clad street cleaners, and even fewer realise that if it weren’t for their tedious hours of work put in at night, the city would not wake up to clean streets.
Duminda works a stretch of Union Place and has been doing so for years. He was taking a small break when I first met him in front of Burger’s King.
A female street cleaner at work during the day. Most likely for safety reasons, the women are not allowed to take on night shifts.
Two CMC Workers stand next to their garbage van. They were kind enough to allow me to photograph and compare notes with them.