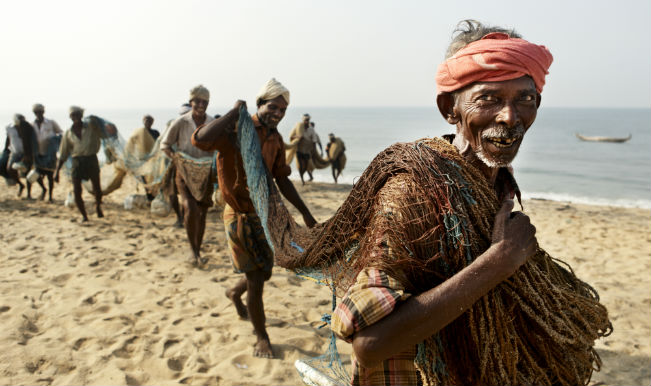 Every now and then local newspapers report incidents of skirmishes between fishermen of South India and Northern Sri Lanka. Most often, these are accompanied by reports of the Sri Lanka Navy arresting Indian fishermen, and taking their vessels into custody.

The most recent incident occurred earlier this week when the Navy reportedly arrested 34 Indian fishermen and 7 trawlers in three different areas off the Northern coast.

As a result, the ‘fishermen issue’ is almost always among bilateral discussions, held during official visits of state representatives from either neighbouring nation to the other.

It seems simple enough on the surface – Indian fishermen in Sri Lankan waters, Sri Lankan fishermen aren’t too psyched about these invaders taking away all their fish; The Navy steps in, shots fired (sometimes literally), the neighbours get angry. The issue is, however, many-layered, and we need to look at it from every angle to understand exactly how serious the situation is.

And how serious would that be?

The issue was most recently taken up for debate in Parliament on October 9, during the course of which M.A. Sumanthiran, TNA parliamentarian and attorney-at-law, explained in detail how the issue was itself two-fold: firstly, there was the problem of Indian boats violating the International Maritime Boundary Line (IMBL) and straying into Lankan territorial waters.

Secondly, these Indian fishermen employ destructive methods of fishing – specifically the bottom trawling method – which is severely detrimental to the marine ecosystem.

Mr. Sumanthiran, in his presentation at parliament, explained that this bottom-trawling method “destroys the entire marine resources including the seabed, because weights are attached to nets from these trawlers that enable the nets to go right to the bottom and then it trawls everything it its path.”

He added that “eventually, they throw away 80 to 90 per cent of what is caught and only a little of the catch is made use of. But, in the end, the resulting position is that the marine environment gets destroyed very fast. It has been said that due to this particular method of fishing, the marine resources on the Indian side have been totally destroyed – there is nothing more – and that is the reason why these fishermen are now coming into the territorial waters of Sri Lanka.”

Mr. Sumanthiran also pointed out that as per the Fisheries and Aquatic Resources Act, this method of fishing is currently regulated, but given the prevailing situation, this is insufficient. “It must be totally banned, because now it is clear to everyone that this method of fishing only destroys the marine resources and long-term sustainability is not possible,” he said.

The Cost to Fishermen

Christy Lal Fernando, Director General of the Department of Fisheries, told Roar that Indian fishing boats stray into Sri Lankan waters in large numbers – up to 3,500 fishing vessels every day – and that these vessels engage in destructive methods of fishing three days a week.

He said that the bottom trawling method of fishing employed by the Indian fishermen has the potential to not only damage the sea-bed, destroy corals and marine life, as well as the breeding environment for such marine life, but also causes up to Rs. 40,000 worth of damage (per vessel) to local fishermen, who mostly use the gillnet method of fishing. A gillnet is a sort of net fence, hanging vertically from the surface of the water to the seabed, and catching fish by way of trapping them. Since bottom trawling is essentially a method where heavy weights are dragged along the seabed, the bottom trawls belonging to Indian fishing vessels can easily damage any gillnets in the way.

Reports of IMBL violations, poaching and illicit fishing methods by Indian fishermen come not only from the Palk Strait, but also from the waters around other areas in the North and East of Sri Lanka, including Mannar, Mullaitheevu, Point Pedro, Kayts, Talaimannar, Kankesanthurai, Katchatheevu, Karaitivu, Trincomalee, and even near Puttalam and Kalpitiya in the North Western Province – which means that Lankan fishermen from all these areas have their livelihoods threatened.

As for the destruction of marine life, Mr. Fernando compared the impact of bottom trawling on the seabed to that of “running a bulldozer across [the] Sinharaja rainforest.”

The Cost to the Country

To make matters worse, at the beginning of this year, the European Union imposed a ban on Sri Lankan fish exports, citing reasons of insufficient measures in place to tackle what is known as IUU (Illegal, Unreported and Unregulated) fishing in Sri Lankan waters. The ban has reportedly cost Sri Lanka millions of dollars in export revenue.

Although it sounds unfair that Sri Lanka has to pay the price for offences committed mostly by Indian fishermen in our waters, Sri Lanka has been working hard to comply with EU conditions. According to the Ministry of Fisheries, an EU delegation is expected to visit Sri Lanka early next month to conduct an audit and review the ban.

Often, serious violations on the part of the Indian fishermen prompt the Sri Lanka Navy to step in and take these fishermen, and their vessels, into custody. According to the Ministry of Fisheries and Aquatic Resources, Sri Lankan authorities also hold in custody another 86 Indian fishermen and 47 Indian fishing vessels (as of October 23), in addition to the 7 vessels and 34 fishermen arrested this week.

In the meantime, 7 Sri Lankan fishermen who had strayed into Indian waters are also being held in custody, by Indian authorities.

Speaking to Roar.lk, Dr. Rajitha Senaratne, Cabinet Spokesperson and former Fisheries Minister, said that for now, both countries have agreed that fishermen’s organisations from both sides will meet and discuss the matter.

The Ministry of Fisheries also recently submitted a proposal in parliament to amend the Fisheries and Aquatic Resources Act No 02 of 1996, and increase the penalty for violations of international fishing laws.

Meanwhile, the Indian government has not been silent on the matter either. It was recently reported that Indian Union Minister of State for Road Transport, Highways, and Shipping, Pon Radhakrishnan, had instructed Tamil Nadu fishermen to refrain from deliberately crossing the IMBL into Sri Lankan waters.

Considering the many issues involved, however, the problem is far too complex to be approached from only one direction. There is, for instance, the issue of the arrested Indian fishermen, which Tamil Nadu has not taken to kindly.

Last Friday (October 23), a number of Rameswaram’s fishing community reportedly went on a hunger strike, demanding the release of the arrested fishermen and confiscated fishing vessels.

Furthermore, according to a recent report by The Hindu, four fishermen from Tamil Nadu were also allegedly assaulted by Sri Lankan naval forces, while the former had been fishing near Katchatheevu earlier this month.

As with nearly all matters concerning bilateral relations, the governments of both Sri Lanka and India have been dealing with the matter with diplomatic caution, while occasionally making stern statements (not necessarily directly at each other) about how they will be safeguarding the interests of their respective citizens.

Amidst the many attempts to try and find a solution to these problems, a number of talks have previously been arranged between members of both the Tamil Nadu and Sri Lankan fishing communities. However, Director General Fernando of the Fisheries Department explains that since agreements made at these meetings have not been adhered to by the Tamil Nadu fishermen in the past, “our fishermen are not willing to talk to them anymore.”

Given the escalating problems posed to more than one party, the issue is evidently one that calls for serious bilateral engagement in finding a solution. How soon this will happen, and how effectively the problem will be solved, remains to be seen.