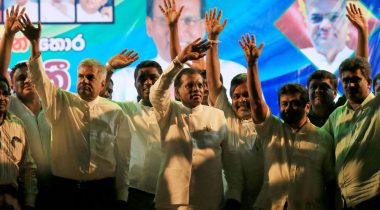 As  Foreign Minister, Mangala Samaraweera, stated at the 30th Session of the United Nations Human Rights Commission (UNHRC), “The best guarantee for non-recurrence, a political settlement that addresses the grievances of the Tamil people,” seemed to be well on its way to meet us.

This article would not need to proceed any further had not the symptoms of cognitive dissonance set in. Now we have Mangala Samaraweera and President Maithripala Sirisena assuring the public that there will be and will not be a new constitution.

The early moments of inattention and haste

Following the statement made by Samaraweera, in January 2016, the Public Representations Committee for Constitutional Reforms (PRC) was set up with the purpose of soliciting oral and written submissions from the public.

On March 9, 2016, Parliament passed the Bill to convert itself into a Constitutional Assembly – a transitory body that repeals and replaces a constitution with a new one. The Constitutional Assembly appointed a Steering Committee comprising of 21 members representing political parties in parliament. The Steering Committee, in turn, has six sub-committees dedicated to Fundamental Rights, the Judiciary, Law and Order, Public Finance, Public Service, and Centre-Periphery Relations, respectively.

Sourcing opinions from the consultations conducted in all 25 Districts of the country, the PRC submitted its first report in May 2016, and in response to further queries made by the Steering Committee of the Constitutional Assembly, a second report in July 2016.

From here on, however, the progress of the draft becomes a little difficult to track. As Article 16 of the Framework Resolution adopted by the Constitutional Assembly states, the Steering Committee is due to submit a final report along with a draft of the new constitution to the Constitutional Council.

However, no final report has yet been submitted to the Constitutional Assembly. The last press release uploaded on the website of the Constitutional Assembly states that the first interim report was submitted, and that the Assembly was due to debate on the said report in January 2017. The latest bit of data on the public domain records the indefinite  postponement of this debate.

Where does the Constitution go from here?

If and when the final report, along with a draft constitutional proposal, is submitted to the Constitutional Assembly, the Framework Resolution predicts these outcomes:

In the sensory memory of Sri Lankans, the year of 2015 would be condensed as a period of convalescence; the ability to say anything to anyone, the mere euphoria of exercising opinion alone sustained a government that delivered much in half-measures. In September that year, when Mangala Samaraweera made his address to the UNHRC, the idea that Sri Lanka wanted some fundamental reconfiguration, if not a whole new constitution, was taken for granted. The first report of the PRC, on its preface, identified four major directions for constitutional reform. Here they are verbatim, from of the committee report:

Except for a Bill of Rights and looser power devolution, the list is more an expression of discontent than specific demands that instigate a new constitution. The permeating desire here is to have the democratic machinery made more efficient by cleaning out the rust of bribes and double-standards – the same undefined agenda which the Sirisena-Wickramasinghe campaign rounded off with the slogan “Good Governance”. It is also nevertheless an actual agenda. To dismiss the above list as peacenik cant would be tantamount to asserting that Lasantha Wickrematunge was a non-person, his public assassination a non-event, and his post-mortem report a non-issue.

But is a new constitution really necessary to guarantee good governance?

The shorter cut to the answer would be to ask what exactly about the present constitution guarantees bad governance.

The map of this unknown land is smudged by diplomatic reassurances, repudiations, lies, and nondescript euphemisms (non-recurrence, national reconciliation, accountability). The easiest way to surmise its contours may be to look at the points where former diplomat Dayan Jayatilleka is attacking it.

The more strident of Jayatilleka’s objections, his moral objections, are products of his anthropomorphic political imagination: he frequently equates the State to a Sinhala-Buddhist patriarch huddling his brood tight while churlishly grunting off foreigners. Hence, his fear that the new constitution will “decapitate [the State] by removing the Executive Presidency,” and his warning that devolution of power will “decompose us into eight or nine competing provinces without a strong center – the executive Presidency – to hold them together”.

His epiphany, struck at the end with an exclamation mark, that the whole thing is a “project for an anti-Sinhala Constitution” is the summation of his system of thought. His throwaway concerns, in that article, about Sri Lanka’s economy are tentative extensions of the same idea. He thinks that a country needs a ruthless individual with enough license to micromanage every citizen.

Then there are the more pragmatic Jayatilleka objections. “A necessary revisiting of the 13th amendment,” writes Jayatilleka, “after 30 years of experience with it and amending certain clauses so as to make it run more effectively could be achieved without a new Constitution and a divisive, polarizing referendum.” The Sri Lanka Freedom Party seems to have adopted this very preference for amendments over a new constitution. Indeed, why should we write a whole new constitution without merely refurbishing the present one with Amendments?

Amendments vs. New Constitutions vs. Referendums

The current Constitution gives Parliament the power to amend or repeal and replace the Constitution (Chapter XII). However, that power is conditional.

Article 83 stipulates that any Bill “for the amendment or for the repeal and replacement of or which is inconsistent with any of the provisions of Articles 1, 2, 3, 6, 7, 8, 9, 10 and 11 or of Article 83]” will require to be passed by a majority of two-thirds of the parliament as well as approved by the people at a referendum. This is an instance of the Constitution creating what are known in law as entrenched clauses – laws whose removal is nearly unattainable by constitutional means. In practice, such laws can be removed, and have been removed, by effecting revolutions. Not the French revolution, or the American or the Arab Spring, but here in Sri Lanka, the government exited Dominion Status under the British Empire through an event we have come to call a constitutional revolution. The Soulbury Constitution (the one the United Kingdom left us with) was repealed and the First Republican Constitution of 1972 was adopted.

If not in political opinion, Jayatilleka appears to be right in political instinct: the only rationale for a new constitution instead of an amendment is the repeal of entrenched clauses.

Sure enough, having considered demands ranging from a confederacy of States to a unitary, central State, the PRC had recommended the following in its first report (verbatim from the report):

The second Report of the PRC is subtitled “comments on representations received in the Constitutional Assembly and referred to the Public Representations Committee”, and does not purport to form conclusions on recommendations of the first report. However, the second report is useful to learn the provenance of those recommendations in the agendas of special interest groups, and to empathise with their rationales. The Northern Provincial Council (NPC) has adopted a resolution calling for a “free and Sovereign Democratic Republic, called the Federal Republic of Sri Lanka,” with the States behaving as “cantons in Switzerland”. It also wants Sri Lanka to be a secular State, effectively defusing Article 9 of the current constitution (“the Republic of Sri Lanka shall give to Buddhism the foremost place”).

As for the Executive Presidency, the first report of the PRC recommends (paragraph 7.1.2) in its stead a Westminster System of governance, with a President who is a titular Head of State and is elected by an electoral college. This diminished President will interfere with executive actions when they entail “threats to national security”.

Neither of the reports are final; we do not have promises nor threats. What we do have is a historic moment where Jayatilleka’s anthropomorphic constitution is being reconsidered – not in the rude inquisitions of university debate societies or in the soft universe of Model United Nations, but in parliament, in the place that always had all the power but never any will.

Responding to a parliamentary address made by R. Sampanthan, the leader of Illankai Tamil Arasu Kadchi (ITAK), Jayatilleka calls the case for constitutional reform as “historicist” and “his argument… a-historical and illogical.” Indeed, the resolution referred to by the second report of the PRC contains (on page 2) a prologue of the ethnic conflict. With references to ancient Tamil Kingdoms and concurrent Sinhalese Kingdoms, and colonialism and the genealogy of ethnic identities, the debate on the unitary nature of State seems to be engaged, at both ends, as a project of historical revision.

Historicism is not history. It’s a theory that attempts to analyse ideas and principles as by-products of meta-movements and civilisation patterns that is only discernible to a perspective from Pluto. Historicism is also the doobie of moral relativists who see totalitarianism and democracy as distant and equivalent smudges. Whatever the tally of the historical record, a concern still survives for constitution makers: irrespective of who came from where first and who wronged whom first, does a government have a duty to protect its citizens from wars both internal and external?

Perhaps we are at the point in constitutional evolution that the political philosopher John Locke said gives the people a right of revolution. By January 8, 2015, Sri Lankans could fairly call themselves to have lived through Locke’s ultimatum – “a time the Legislative shall transgress this fundamental Rule of Society; and either by Ambition, Fear, Folly or Corruption, endeavor to grasp themselves, or put into the hands of any other an Absolute Power over the Lives, Liberties, and Estates of the People”.

Let us hope the new constitution is a revolution and not a relapse.