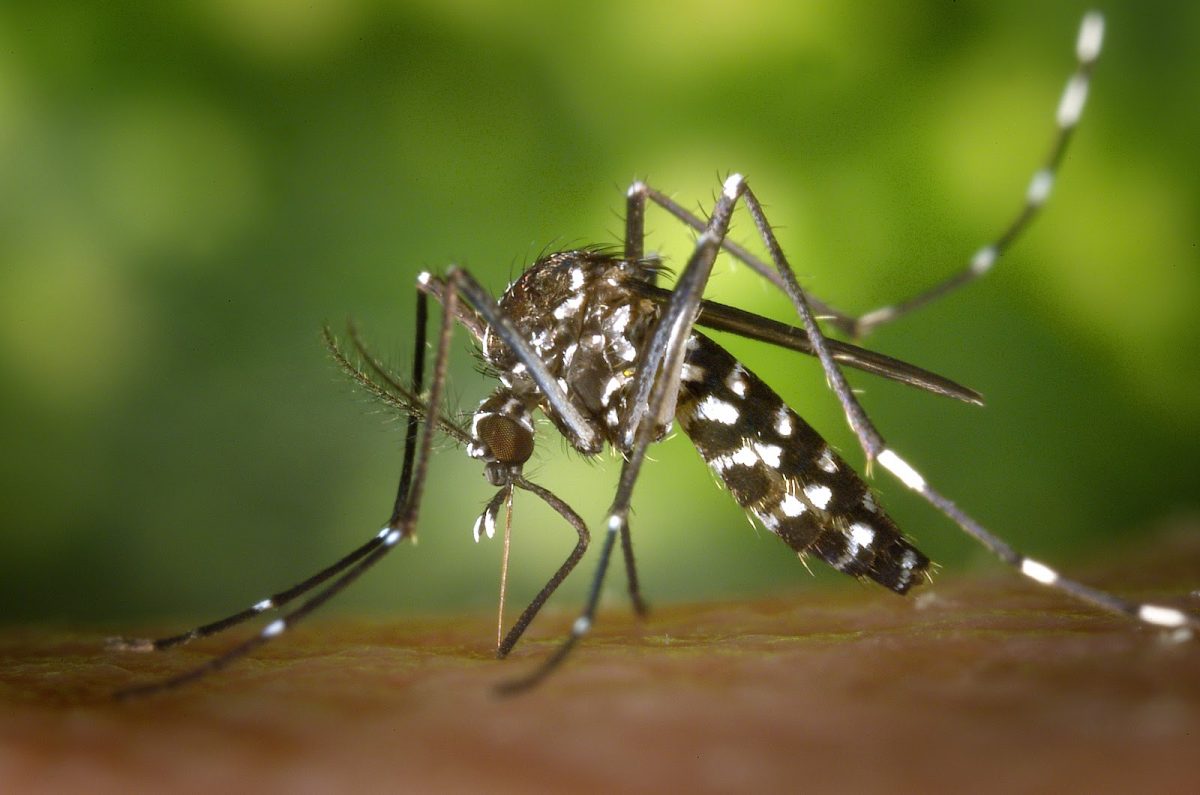 The end of 2016 blew in with the northeast monsoon and a much-awaited hiatus from the oppressive heat that hung over the island for much of the year. Unfortunately, with the rain came the mosquitoes. This was followed promptly by the customary seasonal outbreaks of dengue fever and dengue hemorrhagic fever all over the country. So far, 1,311 cases of dengue have been reported to the Epidemiology Unit of the Ministry of Health since the beginning of the year. Most of them were from Colombo, Jaffna, and Galle.

Prior to this, in December 2016, 7,256 known cases of dengue were reported, with 2,377 of the cases in Colombo. This was the highest tally reached after July 2016, which saw 10,715 cases of dengue. Altogether, in 2016, there were 54,272 reported cases of the disease in Sri Lanka, out of which there were over 70 deaths. However, these numbers do not include the scores of undocumented cases of dengue.

Having endured recurrent outbreaks of dengue fever since 1965, Sri Lanka is no stranger to the disease. It wasn’t until 1989, however, that the country first experienced an epidemic of dengue hemorrhagic fever, which is a severe manifestation of the disease that can lead to fatalities without careful management. Since the first outbreak, deaths due to dengue hemorrhagic fever have been a common occurrence in Sri Lanka.

Severe dengue is one of the leading causes of serious illness and death mostly among children, both in Sri Lanka and the world over. Adults too are at risk of severe infection, but to a lesser extent. According to a recent estimate, around 390 million people worldwide contract dengue infections every year, out of which over 500,000 people require hospitalisation with severe infection, and 25,000 cases lead to death. The disease is most common in sub-tropical and tropical climates, like that of Sri Lanka. In fact, Sri Lanka ranks twelfth among the top 30 dengue endemic countries in the world. Dengue and dengue hemorrhagic fever are the world’s most rapidly spreading viral infections transmitted by mosquitoes. Moreover, they are the number one mosquito-borne killers in Sri Lanka.

Aedes aegypti, the mosquito that transmits dengue, can be identified by the distinctive markings on its legs. Image courtesy: denguefever2012.blogspot.com

Dengue, also called “break-bone fever”, is a viral infection transmitted through the bite of an infected mosquito of the type Aedes, usually Aedes aegyptii. The Aedes mosquito typically feeds at dawn and dusk, but it can breed indoors and thus, is capable of biting and spreading infection throughout the day. The disease cannot be transmitted directly from person to person, but it can be passed on through organ and blood transfusions.

Environmental conditions, such as high temperatures, excessive humidity, and rainfall play an important role in the spread of dengue. During rainy seasons, water tends to collect in natural and manmade containers, such as flower-pots, storage tanks, buckets, coconut shells, and discarded tyres, providing ideal breeding grounds for the female Aedes mosquito to lay eggs in. These eggs can thrive in both clean and organically rich, stagnant water. Climate change seems to be an influencing factor in the spread of dengue. The shifting of seasons is responsible for prolonging periods of disease transmission, shortening the life cycle of the mosquito, and making the insect develop the infection faster after feeding on the blood of an infected person.

After entering the body through the bite of an infected mosquito, the dengue virus enters the white blood cells of the body, causing damage to the immune system and leading to a reduction in the number of platelets in the blood. It can also turn into severe dengue, which is a potentially lethal complication. Most people infected by the dengue virus show no symptoms or experience mild symptoms of the disease. Five percent of those affected develop severe dengue. The disease may be caused by any one of the four existing types of the dengue virus. Although infection by one of these types of virus can provide lifelong immunity to that particular type, re-infection by one of the other types can cause serious complications.

Dengue hemorrhagic fever and/or dengue shock syndrome is a severe form of dengue, and is characterised by the leakage of blood plasma from blood vessels, internal bleeding, fluid accumulation in the body, failure of the circulatory system, liver enlargement, organ impairment, and a dangerous decline in blood pressure. There is no cure for dengue, but the symptoms of the disease can be regulated and managed in order to assist the affected person to recovery.

What Are The Symptoms Of Dengue?

The symptoms of dengue during the three phases of the illness. Image courtesy: en.wikipedia.org

The incubation period for the virus is between 3-14 days, during which time it will establish itself in the body before any physical symptoms become apparent. Symptoms are flu-like, appear most commonly between 4-7 days, and can last for 2-7 days after manifestation. They include:

In some cases, the symptoms of dengue fever can progress to dengue hemorrhagic fever and lead to death. The signs of severe dengue occur 3-7 days after the first symptoms, and are accompanied by the settling of the fever and a decrease in body temperature to about 38⁰C/100F. These signs include:

The 24-48 hours following the onset of severe dengue can be life-threatening, and requires round-the-clock medical care and monitoring.

The Course Of The Disease

The three phases of the disease and their complications. Image courtesy: medscape.com

Beginning with the sudden onset of the symptoms, the infection is divided into three phases: febrile, critical, and recovery, respectively. The first phase lasts 2-7 days and it includes high fever, headache, muscle pain, and/or nausea and vomiting. A rash may occur, starting off as flushed skin and eventually developing into a measles-like rash or red spots that do not disappear when pressure is applied to the skin. Some bleeding from the mouth and nose may occur, as well. The fever is not steady, and may keep falling and rising repeatedly.

Dengue fever is usually self-limiting, but in the case of dengue hemorrhagic fever, the infection can progress to the critical phase. The fever settles during this period, but there is a leakage of plasma from blood vessels, resulting in the buildup of fluid in the lungs and abdomen. This is accompanied by a decrease in the volume of blood and a reduction in the blood supply to important organs, leading to organ dysfunction. Severe internal bleeding is a typical symptom of dengue hemorrhagic fever. The critical phase is more common in children and young adults, and lasts for 24-48 hours.

During the final or recovery phase, which lasts for 2-3 days, the leaked fluid is absorbed back into the blood. A decline in the heart rate and itching may be observed during this phase, sometimes followed by another rash and peeling skin. If too much fluid is resorbed, it can affect the brain and lead to reduced consciousness. In adults, a feeling of fatigue may persist for a fairly long time, even after recovery.

Who Is At Risk Of Developing Dengue?

Dengue poses a greater threat to those living in urban areas, due to overcrowding and improper solid waste disposal in these areas. Discarded containers where water collects can serve as breeding grounds for the Aedes mosquito. Image courtesy: cnn.com

Based on clinical experience in Sri Lanka, dengue largely affects children and adolescents. Severe dengue is most common in babies and children under 15 years, regardless of their nourishment. However, even adults can contract the disease. Those with a weakened immune system, as well as those who are re-infected by the virus and develop a secondary infection, are at risk of contracting severe dengue. People living in urban areas face a greater threat from the disease. The highest incidences of dengue in Sri Lanka have been observed in the Western Province.

Diagnosis, Treatment, And Control Of Dengue

Dengue can be diagnosed based on clinical symptoms, as well as by blood tests, such as the dengue NS1 antigen test, which detects the presence of viral matter. A reduction in the platelet count in blood to less than 100,000/mm³ is also indicative of the disease. Early diagnosis and medical surveillance are important when it comes to treating patients with dengue, therefore people who experience flu-like symptoms for more than two days are urged to seek medical attention.

There is no particular treatment for dengue, though potential vaccines are currently being developed. However, in the event of mild dengue, the symptoms of the disease can be controlled by adequate rest and the consumption of fluids. Paracetamol can be taken to reduce muscle and joint pain, and fever. The use of non-steroidal anti-inflammatory drugs such as ibuprofen and aspirin are discouraged, because they can increase the risk of internal bleeding. In the case of severe dengue, it is critical that patients receive close medical care by qualified doctors and other healthcare personnel in a hospital setting, where their fluid volume can be monitored regularly.

The occurrence of dengue can be reduced by preventing of the spread of the mosquito and their larva responsible for causing the infection, in a process known as vector control. Proper solid waste disposal and water storage methods are an important part of vector control. These practices largely include removing or covering open containers or orifices that can collect water, in order to reduce breeding grounds for mosquitoes. Other control measures include wearing clothing that covers as much of the body as possible, using mosquito netting over beds, spraying insecticides, and applying mosquito repellent solutions on exposed body parts.

In Sri Lanka, government-led spraying of insecticides and vector surveillance are carried out in areas that are suspected to be at high risk of dengue, and legal action is taken against home-owners who fail to destroy mosquito breeding sites. Despite the strict laws, 16% of the premises inspected by the Ministry of Health in December 2016 were responsible for the spread of dengue in those neighbourhoods.

Trends in the incidence of dengue from 2010 to 2016 in Sri Lanka. Image courtesy: www.epid.gov.lk

Dengue is a rapidly escalating problem in Sri Lanka, owing mainly to the increase in urbanisation and the effects of climate change. The infection is adding considerably to the burden of disease in the country and putting a strain on our healthcare system. So far, early detection and careful management of cases in hospitals have played a significant role in lowering dengue-related deaths. However, despite eradication programmes and efficient clinical management, there has been no reduction in the occurrence of the disease. In fact, 2016 saw the highest recorded number of dengue cases since 1992. 2017 does not seem to show any improvement in the situation, with general hospitals all over the country still continuing to overflow with a steady stream of dengue patients.

This raises the question of whether enough is being done to control the spread of the disease. Often called a neglected tropical disease, dengue does not always generate the attention it warrants, both by the authorities and the general population. Disease control is a two-way process, which requires the participation of both the government and the general public. It is the responsibility of the country’s health ministry to implement and sustain effective long-term strategies to target the vector and manage the transmission of dengue. The roles of the public include being aware of the disease, seeking medical care when infected, and cooperating with the government’s strategies. This combined contribution can make a great difference in terms of controlling the spread of dengue before it becomes too large an issue to resolve.