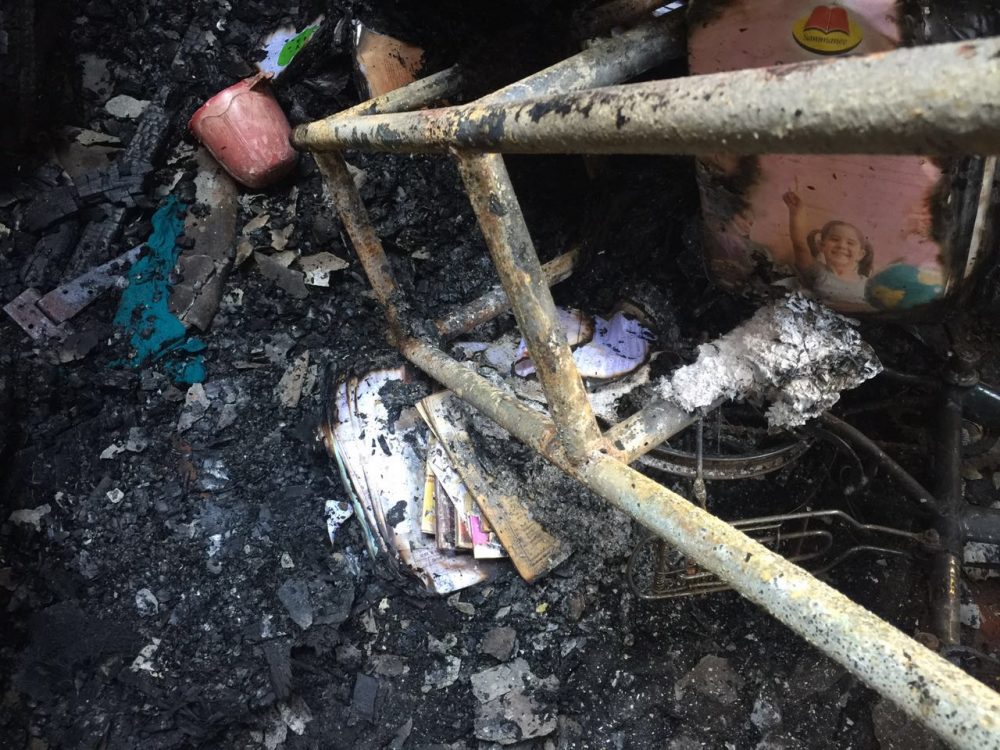 Explosions and shrapnel shook the Kosgama town following a fire at the Salawa Army camp on Sunday (June 5). Unexploded shells and debris can be seen littering what is now almost a ghost town, following the initial flames in the camp’s armoury. Two armouries were destroyed in the fire, which authorities suspect originated from an electrical malfunction, although the exact cause has not been confirmed yet.

Currently, the army reports that one army official had been killed in the explosion, while eight military personnel and 40 civilians suffered injuries. Seventy-five houses within a 500 metre radius from the camp, in addition to the Salawa Hospital in Kosgama, have been heavily damaged. Over 1,000 people from surrounding areas have been evacuated to temporary camps.

Apart from extensive damage to the army camp itself, at least 75 houses and a hospital are reported to have been damaged. Image credit: Kris Thomas

Ten teams of the Police Special Task Force (STF) were deployed to the Salawa Army Camp in Kosgama today (June 6)  to immobilise explosives that had yet to explode.  The STF also noted that 100 STF personnel are part of the teams deployed to the area.

Commander of the Army, Lieutenant General Crishanthe De Silva, said that firefighters, with the cooperation of soldiers, have thrown their full weight behind evacuation and damage control efforts.

They further set up roadblocks on both sides of the Kosgama – Avissawella road to douse the fire when it first began on Sunday evening.

Disaster Management Centre (DMC) Spokesperson, Pradeep Kodippilli, said that a number of people were evacuated following the incident, and teams from the DMC were deployed to the area. He added that district DMC units in the Ratnapura, Kalutara, and Gampaha districts have been deployed.

Alongside clearance efforts, Prime Minister Ranil Wickremesinghe met with the Divisional Secretariats and other local government leaders to discuss relief options for the public evacuated from the area, and to ensure the ongoing safety of civilians.

Accordingly, both the President and Prime Minister have instructed the Criminal Investigations Department (CID) to conduct an investigation into the fire and subsequent explosions at the Kosgama Salawa Army Camp. Meanwhile, Law and Order and Southern Development Minister, Sagala Ratnayake, said investigations are already underway.

The Aftermath Of The Fire

An unexploded shell in the vicinity of the army camp. Image credit Kris Thomas

Nearly half the debris from within a 1km radius  of the Salawa Army Camp has already been cleared, according to Major General Channa Gunatileke.

“Around 50% of the clearing is at its conclusion. Clearance of all ammunition and artillery that landed in civilian areas will need 48 to 96 hours,” the Major said, further clarifying that safety can be declared only after complete clearance.

Two armouries from the Salawa Army Camp were destroyed in the fire. The armouries held ammunition intended for distribution among several army camps.

The “Ranaviru Village” which was situated within the Salawa Army Camp also suffered heavily from the fire.

Seethawaka Divisional Secretariat, M.M.S.K. Bandara Mapa, said that over 1,000 people who resided in the affected areas are currently in temporary camps. According to the Minister of Disaster Management, Anura Priyadarshana Yapa, two temporary camps at the Padukka Temple and Bope currently house 1,120 individuals from nearly 200 families.

The DMC issued a press release stating that the public affected by the Kosgama Salawa Army Camp disaster can contact the DMC on 117 for any assistance.

DMC Spokesperson Kodippili said that it is important for the public to refrain from returning to the area until and unless advised to do so, and reiterated that the public must refrain from touching shrapnel.

Minister Anura Priyadarshana Yapa said that the Prime Minister has agreed to construct all houses that were fully and semi-destroyed due to the fire.

At the same time, Colombo District Secretary Sunil Kannangara told TNL radio that relief efforts for members of the public evacuated after the fire are already underway.

According to Kannangara, an accurate estimation of damages to houses as a consequence of the fire can only be made upon the conclusion of relief efforts. As such, determining the compensation to owners will also depend on this.

He also said  that food and other necessities are being provided to civilians in the Salawa, Kosgama area, as they are unable to reach their homes.

Prime Minister Ranil Wickremesinghe said that the Government fully intends to rebuild everything that was destroyed following the damage assessment.

“The Government is ready to rebuild and refurbish everything that was damaged,” the Premier said, adding that, “it will take some time to evaluate and assess the damage. Within that time, I ask all local government officials to give their full support in the process of clearing the area, water distribution, re-establishing electricity, and in the distribution of food.”

Over 2,300 houses within the affected areas currently lack access to water or electricity. Civilians are also concerned that toxic fumes might have contaminated the local wells and other natural water supplies.

The stretch between Hanwella and Puwakpitiya along the Colombo – Ratnapura road was closed during the fire, according to the Police Media Unit.

Police Media Spokesperson, ASP Ruwan Gunasekara, in a press release said that the road has not been opened for public use yet, and therefore requested motorists to use the Thalduwa – Urapola route to enter the High Level road. The Police also said that it will take another 48 hours to reopen the Colombo-Avissawella road.

Meanwhile, the power supply to the Kosgama area was disrupted as a safety precaution. Secretary to the Ministry of Power and Renewable Energy, Dr. Suren Batagoda, told Roar that power in the area has been disconnected within the radius of one kilometre from the Kosgama Salawa Army Camp.

The Ceylon Electricity Board (CEB) took steps to cut off power in the area as a CEB affiliated Kosgama power substation is situated near the army camp. Dr. Batagoda said serious damages have been prevented due to the power cuts.

The Avissawella Operations Office of the Ceylon Electricity Board said the power supply will not be restored until the situation is resolved and completely under control.

Furthermore, the Ministry of Power and Renewable Energy said they had informed the Kosgama Electrical Superintendent to immediately submit a report if there are any damages to the power lines in the area where the fire took place.

Kosgama: smoke from the army camp rising in the distance, against a sky painted red by the fire. Image courtesy colombogazette.com

What really took place on Sunday evening? Local residents said that they heard explosions and saw thick smoke emanating from the camp site. Residents also spoke of more explosions being heard from underground, following those that came from the armoury.

After the explosions began on Sunday evening, civilians in the area were advised to evacuate the six kilometre radius danger zone. Residents speaking to Roar noted that evacuations began at 7 p.m., over an hour after the first explosions at 5:45 p.m.

Prime Minister Ranil Wickremesinghe said that all schools within the 1 km radius will be closed until further notice.

“There are nine Grama Niladhari Divisions within the 1 km radius of the camp. All schools, businesses and other institutions within that area will thus be closed,” the Prime Minister told a press conference today.

Meanwhile, the Ministry of Education of the Western Province said that the schools in the Dompe, Seethawaka, and Padukka education zones have been closed after taking into consideration safety concerns.

The Prime Minister, however, said that the education activities and business activities outside the 1 km radius from the Salwa Army Camp may commence.