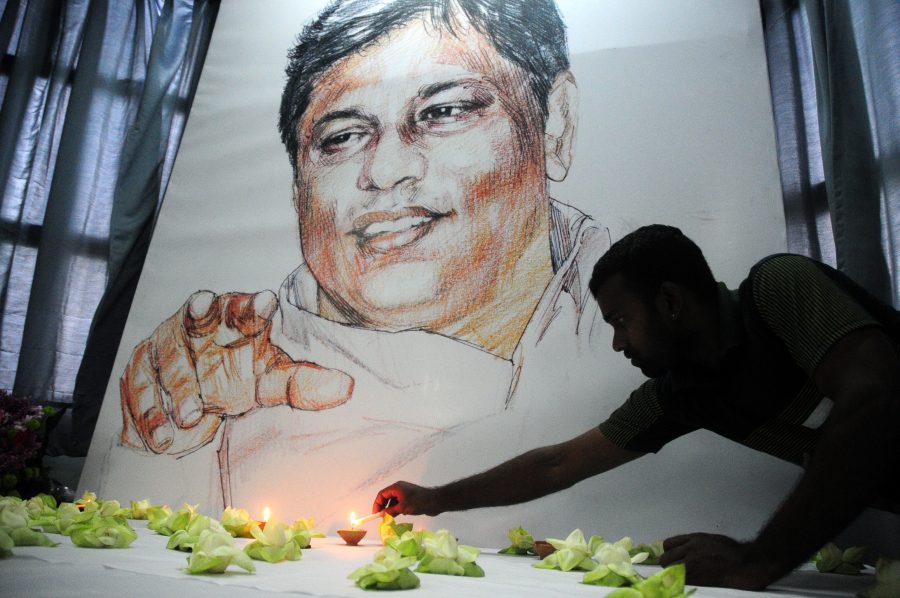 The Lasantha Wickrematunge Case: A Timeline

“People often ask me why I take such risks and tell me it is a matter of time before I am bumped off. Of course I know that: it is inevitable. But if we do not speak out now, there will be no one left to speak for those who cannot, whether they be ethnic minorities, the disadvantaged or the persecuted.” – Lasantha Wickrematunge

From a memorial service held for Wickrematunge in 2014. Image credit: Kalpa Rajapaksa.

Lasantha Wickrematunge was a high-profile Sri Lankan journalist, politician, and human rights activist who was assassinated in January 2009. Wickrematunge and his brother were the founders of Leader Publications, the organisation behind the outspoken weekly newspaper, The Sunday Leader, of which Wickrematunge was founder editor.

The newspaper was known for its criticism of the government, its investigative journalism, and its generally strong stance against all social, political, and economic issues.

The assassination of the editor came at a time when Sri Lanka was already under much criticism for its failure to provide a safe working space for journalists ‒ an issue that Wickrematunge himself had often highlighted.

As a result, Wickrematunge’s murder was widely condemned both locally and internationally, raising more concerns regarding freedom of expression and freedom of the press in Sri Lanka.

Investigations into the assassination showed little progress in the following years. Since the case was reopened after the election of the current government, however, there have been several new developments.

January 8, 2009 – Lasantha Wickrematunge is gunned down while traveling in his vehicle in Attidiya, Dehiwala by two unknown assailants on a motorcycle.

January 11, 2009 – The Sunday Leader publishes an editorial drafted by Wickrematunge prior to his death. The editorial indicates that he knew he would be killed: “I hope my assassination will be seen not as a defeat of freedom but an inspiration for those who survive to step up their efforts.” Wickrematunge had received death threats previously, and had been the target of attacks prior to this.

January 17, 2009 – The Sunday Leader reports that the initial post-mortem examination, carried out at the Colombo South Hospital in Kalubowila, is inconclusive with regard to the cause of death. The report claims that medical teams have expressed mismatching views with regard to the murder weapon. The report further claims that Wickrematunge’s mobile phone, notebook, and a file with a sheaf of papers that were supposed to have been with him at the time of the murder  have gone missing.

February 26, 2010* – Two suspects, P. Jesudasan and Kandegedara Piyawansa, are arrested by the Terrorism Investigation Department over the murder and alleged terrorist activities.

A bystander who had stolen Wickrematunge’s phone from the crime scene is also arrested. He is detained for six months and then released.

Later on, seventeen other army officers are arrested with regard to the murder. However, each suspect was released over the course of three years.

April 11, 2011 – UPFA MP Prof. Rajiva Wijesinha reveals that the British High Commission in Colombo had told him that the High Commission possessed evidence that former military chief Gen. Sarath Fonseka was involved in the assassination.

This was after Fonseka’s loss at the 2010 Presidential Election where he contested as the Common Candidate from the United National Party.

January 8, 2012 – The Sunday Leader claims that Gen. Sarath Fonseka was involved in the murder. The article states that then Opposition Leader Ranil Wickremesinghe had accused Fonseka of the murder in 2009.

September 6, 2013* – Second suspect Kandegedara Piyawansa is later released on bail after making a statement to the courts. He is released due to lack of evidence.

In between 2012 and 2015, few developments are reported in the murder case of Wickrematunge. In 2014, the Committee to Protect Journalists (CPJ) announces that Sri Lanka ranks fourth in the 2015 Global Impunity Index, which highlights countries “where journalists are slain and the killers go free.”

The arrested suspect being brought to courts. Image credit: colombogazette.com

January 10, 2015 – Minister Rajitha Senaratne tells media that the new Government will reopen investigations into the murder case, which will be handled by the Criminal Investigation Department (CID).

February 17, 2016 – The CID releases composite sketches of two suspects who are believed to have carried out the murder.

July 15, 2016 – The CID arrests an officer of the Directorate of Military Intelligence in connection with the murder. The suspect is charged with abduction of an eye witness, assault, conspiracy, and making death threats.

July 27, 2016 – At an identification parade, Wickrematunge’s driver identifies the arrested DMI officer as one of the suspects present at the crime scene.

September 27, 2016 – The CID exhumes Wickrematunge’s remains for a new autopsy. The remains are handed over to the Colombo Judicial Medical Officer. Speaking to the BBC, Wickrematunge’s colleague and former Editor of The Sunday Leader, Mandana Ismail Abeywickrema, said:”I had to identify the body ‒ it was one of the most difficult things I have done in my life. To see his remains like this made me angry that we had to wait so long for justice for him. I don’t know why still they have not questioned people who were in charge of the defence establishment at that time.”

September 28, 2016 – The New York-based Committee to Protect Journalists welcomes the fresh investigations, calling on President Sirisena to “facilitate investigations into all cases of journalists who have disappeared or been killed, bring their perpetrators to justice, and end the cycle of impunity.”

The JMO’s report on the new probe is expected in one month.

Lasantha Wickrematunge stood for fearless journalism, and in many ways re-defined the stance of Sri Lankan media.

To many, journalism is presumed to be a profession of glamour and adventure, but the work of journalists like Wickrematunge prove that it is in fact a lot more than that. It is about truth, and justice ‒ the search for both of which takes time, and can sometimes cost lives.

*Updates made to original version of article