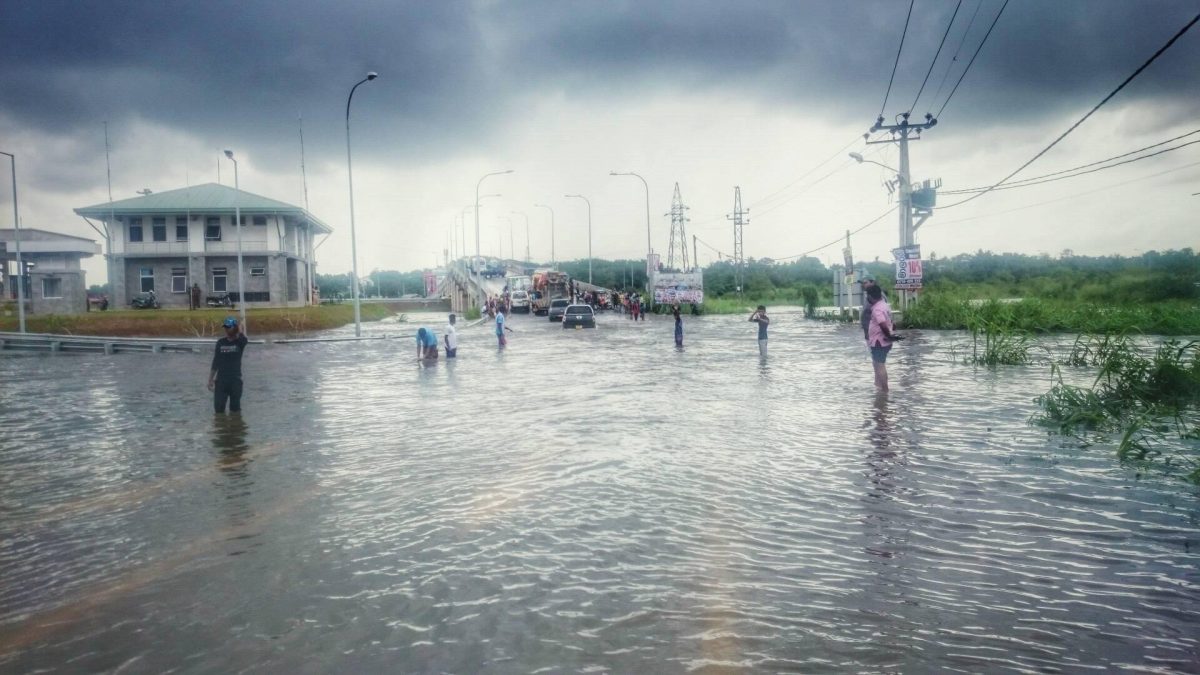 More updates as they develop can be found here.

Come rain or shine, the weather’s been causing a lot of trouble these past few months. What with the incessant rains this week, however, several Government authorities issued numbers for the public to contact in cases of emergency situations.

We’ve compiled a list of numbers you can call just in case things get difficult at your end, as well as a list of relief efforts currently underway by both the state and private entities.

The city and its suburbs have experienced their fair share of flooding, while other parts of the island have been more severely affected. Image credit: AP/Eranga Jayawardena

Roads: The Road Development Authority requests the public to call the hotline 1968 for any issues relating to road blockage due to rain or landslides.

Tri Forces: The Ministry of Defence has provided hotlines for the public to inform the tri forces of any emergency due to the weather conditions. Accordingly, the public can contact the Army, the Navy and the Air Force through these numbers:

Police: Furthermore, Police Spokesperson ASP Ruwan Gunasekara issued a statement regarding an additional emergency hotline. The public can contact the Sri Lanka Police for emergencies on the following numbers:

Flood Assistance: The Ministry of Disaster Management has set up the hotline 117 for those who are seeking assistance due to the floods.

Boats: Meanwhile, with several areas being flooded, there is also an urgent requirement for boats. The Chief of Defence Staff has asked to call Lt. Ariyarathna – 0718365668 for boat requirements.

[UPDATE] Air Force: The Sri Lanka Air Force (SLAF) released a statement earlier today informing the public that helicopters are on standby for disaster relief operations. SLAF Mi 17 / Bell 212 / Bell 412 Helicopters and rescue teams are ready for rescue operations at the SLAF bases in Anuradhapura, Hingurakgoda, Ratmalana and at the SLAF station in Palaly. In addition, SLAF Fire fighters, Regimental Special Force personnel and rescue teams comprising Officers and Airmen are on standby at all SLAF establishments for rescue and relief operations.

In the event of no state response: The President’s Media Division issued a press release yesterday (May 17) urging the public to call 1919 if a state official or agency has not yet attended your flood affected area.

Some areas have been worse-hit than others, prompting the respective District Secretariats to take necessary action.

The District Secretariat of Gampaha has requested the public to provide dry rations, water, and sanitary items for those affected by floods and landslides. For more information regarding this, you may call : 0713527039 or 0332222235.

A special discussion is currently underway at the Nuwara Eliya District Secretariat pertaining to the current disaster situation. According to newsradio.lk, which quoted the District Secretary K.H.A Meegasmulla, relief and evacuation efforts are being discussed at the meeting.

With flooding and landslides being reported from across the island, the forces have been involved in relief efforts since Sunday. Image courtesy Army Media.

The Disaster Management Centre (DMC) said that over 137,000 people are sheltered in over 224 relief camps across the island. Meanwhile, various Government organisations and social activists have commenced several relief operations for victims of the floods.

Teams from the Army, Navy and Air Force have been deployed to all disaster struck areas to provide relief and assistance.

Meanwhile, according to media reports, rescue teams are still searching for nearly 200 families lost in the Aranayake landslide in Kegalle. Seventeen bodies had reportedly been recovered at the time this article was published. Army Media Spokesperson, Brigadier Jayanath Jayaweera, told Roar that the number of casualties could increase.

[UPDATE] As of this evening (May 18), military officials overseeing rescue operations at the Aranayake landslide site reported that 134 people are still believed missing, while a total of 19 bodies have been recovered thus far.

[UPDATE] According to the Sri Lanka Red Cross Society, four temporary camps have been set up by the Government to offer assistance to landslide victims. One camp is being managed by the Red Cross, at the Viyaneliya Temple, where 384 people are seeking refuge.

[UPDATE] As of 9:00 p.m. today (May 18), the total death toll from across the country was at 37, with 21 people reported missing due to floods, according to the DMC. Furthermore, over 352,374 are believed to be affected, out of which 223,687 have been recorded as displaced due to floods and landslides.

Troops have launched rescue operations in inundated areas of the island, with boats and helicopters rescuing more than 200 people trapped in Thabbowa, Puttalam.

The Navy has rescued 633 civilians from different parts of the island, while 118 persons have been taken to safety.
With nineteen of Sri Lanka’s twenty-five districts severely affected by bad weather, DMC sources said that this was the worst torrential rains we have experienced since 2010.

Sirasa Shakthi John Keells Sahana Yathra will be collecting donations at their main collection centre at No 330, T.B. Jaya Mawatha, Colombo 10 at any time of the day.

The Leads Emergency Relief too will accept donations such as dry rations and other essentials. You can either donate or volunteer. Contact Diordre on 077 3187 652 or Shalini on 077 3957351 for more information.

#floodaid from @PickMeLK is an example of how an app already with so many can help channel aid in #lka #srilanka pic.twitter.com/vWJ4IrBJ7i

Collecting dry rations and goods for the flood affected in Kegalle, please contact me for details if able to assist #lka

Boats are urgently required by rescue teams, if people have boats to donate to the rescue operations please contact me #lka

We're standing by to help our partner NGOs respond to the #SriLankaFloods. Contact us if your organization needs help delivering aid.

If you are aware of any other relief efforts being organised, feel free to let us know in the comments section below.

All hands on deck are needed for times like this. We ask our readers to help those in need and help themselves by taking care. Stay safe!