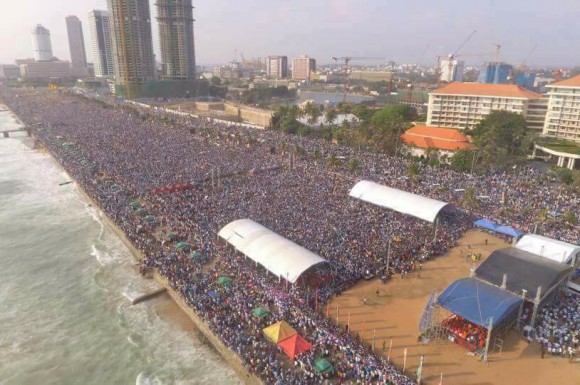 Former President Mahinda Rajapaksa’s May Day rally is all everyone seems to be talking about these days—at least on social media. A crowd of roughly 100,000 people gathered at the Galle Face Green to hear the man speak, sending those on the other side of the political fence into a quiet panic in some cases, and a frenzy of denial in others. His supporters, on the other hand, have been attempting to equate the 12-acre green to the entire Sri Lankan electorate, prophesying their erstwhile leader’s triumphant return to power, vanquishing (in their eyes) the treacherous and unholy alliance of President Maithripala Sirisena and Prime Minister Ranil Wickremesinghe for good. Whether or not this will actually come to pass, of course, is a matter of debate. But the fact that it’s come to a debate at all should be, if nothing else, cause for concern for the (to be rather generous) once unbeatable Unity Government.

That the UNP-SLFP coalition has been on shaky ground for some time now in terms of public support shouldn’t come as a surprise to anyone, but it’s safe to say that not many—at least among the Colombo elite—were prepared for the massive turnout at the Joint Opposition’s labour day rally, where Rajapaksa, for all intents and purposes, gave the Government the proverbial finger in a stunning display of strength and mass appeal. The message was loud and clear: The people are with him. In fact, he literally said, “We accepted the challenge [to fill Galle Face with people] and fulfilled it. Now, it’s only fair that we challenge the Government. We challenge them to hold the elections for local government bodies immediately. But after seeing this crowd, they will never go for any election.”

Even if one were to argue that an overwhelming majority of the Galle Face crowd was grassroots party supporters who didn’t really represent the voting public (which, to be fair, has been the case historically with most May Day rallies in Sri Lanka), it would be naive to think that the unprecedented turnout wasn’t indicative of the larger sociopolitical status quo: the ordinary citizens of this country, the working class men and women who eke out a living amidst an ever rising cost of living with a looming economic crisis to boot, are fast losing patience with this Government; and if its leadership doesn’t get its act together—particularly given the lack of a viable alternative—a return to the Rajapaksa era will be inevitable. Never mind that it was really the former regime that pushed the country into the economic quagmire it currently finds itself in. Never mind that it was really the Rajapaksa government that entered into questionable deals with China and India.

In a lot of people’s eyes, this Government has been a let-down on various fronts, and it needs to be replaced sooner rather than later. There is also growing sentiment, rightly or wrongly, that the powers-that-be—particularly on the UNP side of the Government—have allowed foreign powers to interfere with the country’s domestic affairs. Faced with such uncertainty, who else are they going to turn to but the man that saved the nation from the clutches of Western-sponsored separatism? Even if Mahinda himself doesn’t run for President or Prime Minister again, there is always the next best thing that is his younger brother. Speculation is rife that Former Defence Secretary Gotabaya Rajapaksa will make a bid for power in 2020. Sentiments have been expressed by some quarters that this bid will more than likely be successful if the current anti-government, anti-reconciliatory trend continues; but that’s a story for another time.

The May Day rallies of the two main constituent parties of the so-called Unity Government couldn’t have been more different from that of the JO. Where Rajapaksa and friends appealed to the sense of patriotism of the crowds and those listening at home, speaker after speaker waxing eloquent on the perils faced by the nation at the hands of an unpatriotic government, the SLFP and the UNP used their respective platforms in Kandy and Borella to talk about petty party politics and joint ventures with India. Being out of touch with the pulse of the people has long been the forte of the current incarnation of the UNP, but even they should’ve known better than to talk about the hotly debated Trincomalee oil tank farm on a day that is supposed to be about the struggles faced by the working people of this country.

Not even the Marxist JVP, it seemed, could resist the urge to talk about grabbing power. Even though it held a Labour Day rally in Jaffna, its main rally was held at the BRC Grounds in Colombo, where Party Leader Anura Kumara Dissanayake said the party had got a “golden opportunity to seize power due to the political vacuum created in the country with the deterioration of the three main political camps of Sirisena, Wickremesinghe and Rajapaksa.” While he is arguably not wrong about this being an opportunity for an alternative political force to test its electoral strength, any scenario where the JVP is in any kind of real power remains a distant dream for even the most optimistic of its supporters. And the unsubstantiated rumours that the party high-ups are in cahoots with the UNP leadership are surely not helping their cause.

With the next major elections just three years away, the Government is running out of time to keep the threat of Rajapaksa (Gota or Mahinda, take your pick) at bay. If there is one thing the Sri Lankan populace is notorious for, it is its collective forgetfulness, and if the growing unpopularity of the Sirisena-Wickremesinghe administration continues unabated, it is no stretch to say that the ever so forgiving voting public of Sri Lanka will turn to the very man they once removed from office to swoop in and save the day. If the May Day rallies of the three main players in the game are anything to go by, it looks as though the end result is all but set in stone.