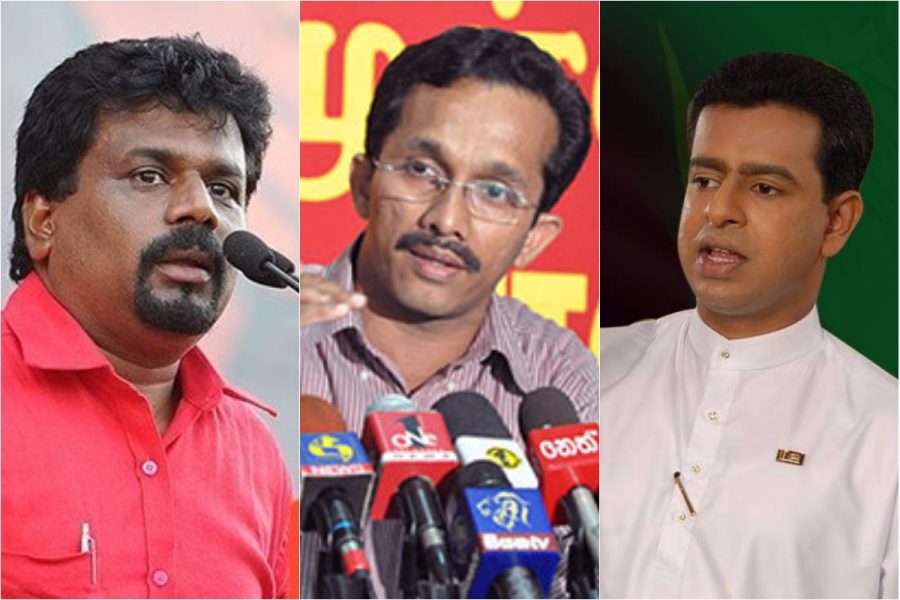 JVP MP Sunil Handunnetti said it best: “In an age of reality TV centred around celebrities and pop idols, it is refreshing to see a system in place for ranking members of parliament. We are lawmakers. We have a role to play [in shaping the country].”

Manthri.lk, launched in 2013 by Verité Research with the aim of tracking and monitoring parliamentary proceedings and ranking our representatives in order of performance in parliament, formally unveiled its findings last week. Surprising no one, the Janatha Vimukthi Peramuna (JVP), known for its vociferous speakers, dominated the top 10 best performing members of the eighth parliament, based on a variety of metrics. JVP MPs Anura Kumara Dissanayake and Sunil Handunnetti were ranked No. 1 and No. 2 best-performing parliamentarians respectively.

Coming in at third place, UNP Matara District MP Buddhika Pathirana became the best performing member from the government side. Prime Minister Ranil Wickremesinghe came in at fourth place, with Finance Minister Ravi Karunanayake not too far behind at 7th place. According to Head of Politics at Verité Research Janeen Fernando, Manthri.lk uses a quantitative system of ranking where a unit of productive time is assigned to each type of parliamentary activity. This includes nearly 30 different types of activity that take place in parliament and is available in the public domain, such as adjournment motions, written questions, petition, bill debates, and private members’ bills, as well as their involvement in Consultative Committees.

For the uninitiated, an adjournment motion is used by MPs to temporarily terminate sittings of the House of Parliament to focus the legislature’s attention on a specific matter that they deem to be of urgent public interest. A written question can be posed by an MP to a government minister requesting information on policy and activities related to relevant government departments.

In addition to main chamber sessions, Fernando explained to Roar that Manthri also pushed for making consultative committee reports public, and produced rankings on committee data for all available reports from May 2014 onwards. However, special committees such as the Committee on Public Enterprises (COPE) remain a secret. Although, some MPs have subsequently voiced their support for making COPE and others like it more transparent by amending the standing orders.

“Currently, the consultative committees have been dissolved and new sectoral oversight committees have been installed. As soon as those reports become available we will start tracking them too. Basically, Manthri tracks anything in parliament which is made officially available. The onus, therefore, is on Parliament to make data available to improve the comprehensiveness of MP monitoring,” Fernando told Roar.

However, as it stands, a majority of it is in the public domain via the Hansard. The Manthri.lk data set comprises over 35,000 Hansard records. The site classifies MPs’ contributions using the above-mentioned metrics which it then puts through a scoring system. The scoring system, according to Verité, equally rewards all MPs for contributions made, interestingly, without making a value judgement on content.

“MPs are penalised, however, for not following the rules of parliament when making disruptive statements or misusing points of order as identified in the official record,” said Fernando.

This system captures and penalises disruptive contributions, ensuring that MPs who are procedurally out of order are not credited for their disruptions, said Verité in a statement.

While it is heartening to know that, according to Manthri.lk, 214 out of the 225 lawmakers have participated at least once in a legislative debate, 11 have not taken part in even one.

Some 101 MPs had submitted petitions on behalf of their constituents, while 45 MPs have asked at least one written question over the past year. According to figures released to the media, five MPs have not participated in any parliamentary activity over the same period.

Though not directly related to the rankings, it is interesting to note that, according to the data, there has been a tenfold increase in no confidence motions since the advent of President Maithripala Sirisena. That’s 18 motions in total, in the 18 months of Sirisena’s presidency, compared to the mere three in former president Mahinda Rajapaksa’s nine-year tenure. The Point Of It All

Speaking at the launch event held at the Lakshman Kadirgamar Centre for International Studies, Fernando said: “Manthri.lk is not just about who’s active in Parliament. It’s also about accessibility and transparency.”

Speaking to Roar, Fernando elaborated: “The simplicity of a quantified system also allows users a quick way of making sense of what is otherwise only available in the form of 10,000s of pages of parliamentary Hansard.”

As Tamil National Alliance MP M. A. Sumanthiran said at the event, “greater visibility is the one thing that will make Parliament more productive.”

The more the public is privy to the contributions made by their elected leaders ‒ or lack thereof, in some cases ‒ the better informed they will be, come next election, thereby incentivising the process and giving MPs a reason to actually stand on their feet and raise questions in Parliament on behalf of the people that voted them into power.