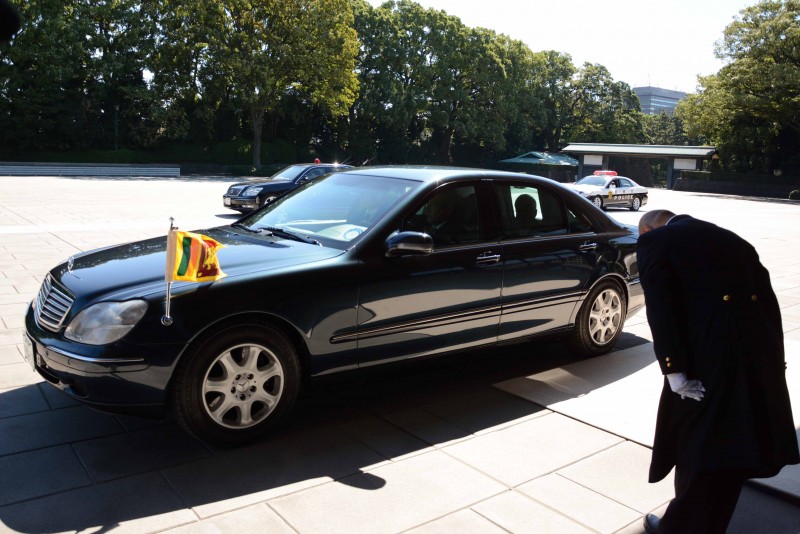 Ministerial Vehicles: What, Why, And Is This Even Necessary?

The allocation of over a billion rupees for the purchase of duty-free vehicles for several Government ministers has received a lot of speculation and criticism in recent times.

The Government, in justifying the move, has called it a necessity, while others have called it an unethical misuse of the principles the current Government claimed to stand for.

The sum of money, to the average Sri Lanka, may be staggering in itself; but this news could not have broken at a more inopportune time ‒ it is no secret that the economy is in need of some serious revival, and the disasters that struck the island during  the last few weeks have called for the sudden and necessary allocation of funds for relief and disaster management.

Last Tuesday (June 7), the Government sought approval from Parliament to purchase thirty-two brand new vehicles at a cost of Rs 1,175 million (Rs. 1.175 billion) for the use of thirty ministers, state ministers, and deputy ministers of twenty-two ministries.

Prime Minister Ranil Wickremesinghe, however, temporarily postponed the purchase of the vehicles on Thursday (9) following the major backlash the news received in a matter of two days.

Writing to the Treasury, the Prime Minister instructed to halt the process of granting money to purchase vehicles until reconstruction of homes and state buildings damaged by the recent Aranayake landslides and the fire at the Salawa Army camp had been completed.

Can We Afford This?

Advisor to the Anti Corruption Front, Rajith Keerthi Tennakoon, said that such a purchase is wrong and unethical on several levels. However, according to him, the purchase is affordable since the Government had already allocated the funds in April, as pointed out by an article in this week’s Sunday Times.

The Times report stated that millions had been allocated from the budget in April under Clause 6 (1) of the Appropriation Act, even though the supplementary estimate was only revealed this month.

Speaking to Roar, Keerthi Tennakoon added that this purchase is “fundamentally against the principles of good governance,” which the current administration claims to hold on a high pedestal.

“There are two questions regarding this matter; will the people get anything productive in this purchase, and [is this] the right time to buy these vehicles? The public is suffering a lot with the recent increase of the taxes. This is very unproductive and it adds to the Government’s burdens. This is not what we expected from the ‘good governance’,” he said.

To Serve The Public Better?

Do Ministers really need the fancy vehicles to serve the public better? Should this not be a problem if funds had already been allocated? Image courtesy jeep.com.lk

Furthermore, these vehicles will be duty-free. Thus, when the Ministers go ahead with this purchase, the Government will lose out on tax revenue. However, they have justified this purchase as crucial to their services to the public. To the public however, their justifications appear to be mere excuses made by the privileged minority.

He claimed that the vehicle he had been using previously was unsuitable for ministerial work, and even invited the public to use his vehicle and see for themselves.

“All Ministers, Deputy Ministers, General Secretaries, and Provincial Councillors are allocated vehicles for their work purposes. This is nothing new. They don’t take those vehicles under their names but under their respective ministry or institution. The Ministry of Megapolis and Western Province Development is a new ministry and that is why we need vehicles,” Deputy Minister Alagiyawanna said.

“These vehicles are not for our personal needs, but for Ministry work. Besides, we will always work for the good of the people. The services we provide for them will not reduce,” he said.

This was followed up by Co-Cabinet Spokesperson and Minister of Health and Indigenous Medicine, Rajitha Senaratne, who claimed that these vehicles were essential for the Ministers to carry out their duties for the betterment of the public.

Minister Senaratne, who defended the allocation last Wednesday (June 8) at the weekly Cabinet press briefing, said, “Ministers have to travel a lot and the vehicle should be in a good working condition.”

He said, “In Sri Lanka it is the Minister who has to look into every issue pertaining to his Ministry. The process of purchasing vehicles is done in a proper and legal manner unlike the former Government.” He then added, “Some roads are in a very bad condition. The Ministers cannot travel to those areas in normal vehicles. They need four-wheel vehicles with a high engine capacity.”

A Matter Of Ethics

However, there were some who declined this vehicle facility on the grounds of personal policies. One such Minister was Deputy Minister of Social Services, Welfare and Livestock Development, Ranjan Ramanayake.

“We have asked the public to tighten their belts to pay back the debts of the previous government so I feel it’s up to us to also set an example. That is why I sent a letter to the ministry immediately rejecting this offer on the very day the estimate was approved,” Deputy Minister Ramanayake told Roar.

He added that he was against the whole estimate of allocating millions of rupees for vehicles because of the promise made on January 8, 2015, against procuring vehicles with public finances.

A vehicle yard in Colombo, January last year, when over 50 state-owned vehicles, including bullet-proof limousines, were seized by police. Image credit: AFP

It is no secret that Sri Lanka has bigger problems than the fact that its ministers do not own luxury vehicles. It is ironic that these ministers compare Sri Lankan ministers with the ministers of countries like Singapore when it comes to giving excuses on what they want, but our country itself remains a dismal state in comparison.

Furthermore, it must not be forgotten that just last year, Police seized over 50 state-owned vehicles that had not been returned by the previous government. The vehicles that were recovered lay unused, rusting, and collecting dust while investigations are still ongoing. The question is, given that there are already unused vehicles in government custody, and given the state of the economy and increased burden of taxes, do we really need to deck our ministers, who have yet to fulfill their promises, with more benefits?