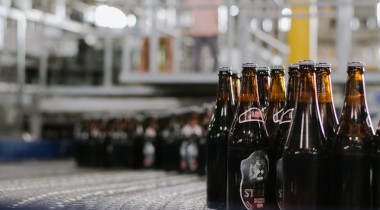 You enter the Lion Brewery in Biyagama by going up a steep ramp. This ramp is much steeper and higher than it was a year ago. This is one of the results of extensive flood-prevention work carried out after the waters of the Kelani River poured into the factory, last May.

There is no branding visible from the main road. From the outside, the brewery looks like any modern industrial site. This is deliberate and is to comply with Sri Lanka’s strict policy of outlawing the advertising of alcohol and the promotion of its consumption.

The utilitarian appearance is also appropriate. The brewery is a place of business and an ultra-efficient, highly automated factory. The production line was supplied by the leading German manufacturer, Krones. The expression “state of the art” is over-used and has become something of an industrial cliché, but Lion’s facilities at Biyagama really are state of the art.

The only clues that you are not in a flagship German or Danish facility are the tropical heat on the factory floor, the odd palm tree visible from the walkways, and the fact that the canteen serves curry instead of bratwurst.

Over the last 11 months, the company has overcome the biggest setback in its history—a history which stretches back to the 1860s, when a British planter set up Sri Lanka’s first brewery in the cool climes of Nuwara Eliya.  Since then the business has grown massively. Ownership and the name have changed, with the old logo depicting a stag’s head eventually giving way to the Lion brand familiar today.

The biggest change came in 1998 when Lion established the new brewery at the Biyagama industrial zone, located east of Colombo. The Nuwara Eliya site was gradually run down until it closed in 2001, and all production was switched to Biyagama.

On the morning of May 16, 2016, a low-pressure system was gathering strength in the skies above the Bay of Bengal. The Sri Lankan Meteorology Department issued a severe weather warning for the coming twelve hours, predicting rains up to 100 millimetres and winds up to 80 kilometres per hour. But the rain didn’t stop after 12 hours. The deluge continued for four days, with some areas receiving nearly 400 millimetres of rain in a single 24-hour period.

Rivers across Sri Lanka swelled and broke their banks. Homes were destroyed and lives were lost. By the time the waters receded, the island-wide death toll was put at 92, with another 109 people counted as missing.

The brewery is located approximately 200 metres from the river. Managers and staff had coped with flooding in previous years when the Kelani River breached its banks and made the main road outside the factory impassable. But this time it was different. A wall of water—more than 6 feet high—overwhelmed the flood-defences and inundated the factory.

“It was devastating to see the plant,” said Head of Administration at Lion Breweries, Eshantha Salgado. “It’s not clean water so you had a water mark everywhere. There was a lot of mud and a lot of debris. It was just a lot of mud and grime. Machinery was pretty much ruined on the ground floor. Any and all stocks were damaged.”

“It’s not something you associate with our plant on a day to day to basis. A lot of our colleagues afterwards just couldn’t believe their eyes. All of our utilities were damaged, generators, refrigeration, water processing and treatment plants. Our packaging lines were safe because they are on the first floor, as were our malt silos and the fermentation tanks. But everything else, especially the electronics and the control rooms were pretty much swamped and all of that has been replaced now,” added Salgado.

The flooding could not have come at a worse time for Lion. The company was already suffering badly from a new government tax policy, which had made hard liquor, like arrack, comparatively cheaper.

Lion revealed in its December 2016 quarter filing that volumes had plummeted by 40% following a 70% increase in the tax on beer. Tax on arrack had also increased, but only by 25%. The result was that many consumers had switched from beer to arrack, which increased its sale by 14%. The higher taxes not only dented the wallets of consumers, but also hit government revenue, which saw the first reported fall in income from alcohol taxes.

Shareholder reaction to the flood’s impact on the Lion Brewery was negative. The share price fell 14% that year, from May 17 to September 30, as sales dropped 47% during this period, and profits dropped by 175%.

The damage inflicted by the flood left just enough beer for a mere 15-days’ demand, and the company was forced to seek help from the Danish brewing giant Carlsberg, which has a 25% stake in Lion.  To prevent local sales from collapsing, Carlsberg arranged for four of its Asian breweries to pick up the slack.

Equipment and machinery worth Rs. 2.9 billion were wiped out by the flood. By the time the Lion Brewery was back in operation last December, the business had seen a 57% drop in beer sales, settling for Rs. 15 billion.  Profits had fallen 130%, down to Rs. 613 million at the end of December 2016. Despite all the bad news, the company is optimistic about the future.

Despite the post-flood losses, Lion is optimistic about the future. Image credit: Roar/Nishan Casseem

Lion’s Head of Administration is proud of the way the company has bounced back and how it has dealt with the aftermath of the flood. “Even though we went down, it really was a massive team effort and [from] there on we saw the Lion family coming together to get us out in five and a half months, which was the remarkable side. So there was the loss, but also the feel-good feeling that we could come through anything.”

There is little or nothing that Lion could do about the impact on sales caused by the taxation regime on beer in Sri Lanka, and many would argue that a so-called “sin tax” on beer is a sensible way of raising revenue while deterring people from drinking too much. Lion, however, is determined not to get caught again by the capricious Kelani River. The brewery has invested Rs. 454 million for flood-prevention measures and Eshantha Salgado believes they will never again suffer the damage inflicted by last year’s flooding.

Elevated electrical equipment – a precaution Lion has had to take after suffering losses during the May 2016 floods. Image credit: Roar/Nishan Casseem

“We have done a complete assessment of the flood defences as we have it,” said Salgado. “We brought in a Dutch firm, they are generally the specialists in this sort of thing. They’ve done the calculations and we basically increased the height of our surrounding flood wall. It has been reinforced and we have also nearly tripled our pumping capacity. We have taken precautionary measures like backup generators—4 backup generators. All electronics, wherever possible, are now at an elevation. We are blocking all the exits, and we are pretty confident that [the] factory is going to stay dry, even if most of Colombo goes under.”

Shareholders and consumers alike can only hope his confidence is justified.