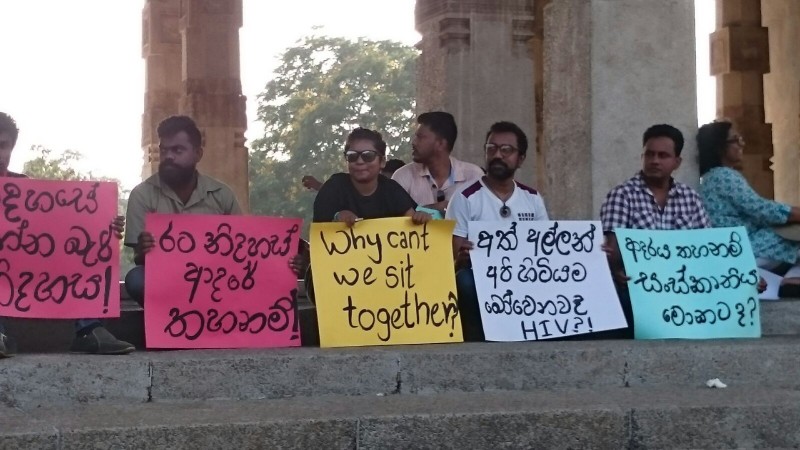 Independence Square yesterday (March 6) was filled with more than the usual crowd of Sunday visitors, many of them holding placards as part of a silent protest against restrictions imposed on couples occupying public places in the city.

Although Sri Lanka has a reputation for evicting couples from public places such as Independence Square and Vihara Maha Devi Park, this is probably the first time people chose to openly question such actions on the part of authorities, and raise their voices against it. The protests were sparked off after one such couple recently questioned security officers on duty as to why they were asked to leave Independence Square. The ensuing argument between the two officers and the young woman and her boyfriend was recorded by the latter, and the video went viral on social media.

The video, in which the young couple point out that they “did no wrong” also shows the officers unable to provide a satisfactory reason as to why couples were not allowed to socialise at Independence Square:

When Roar contacted the couple in question, they had this to say:

“At the time we got there a group of people was already seated at the location, so we too sat down and were admiring the serenity of the premises… [We] were seated about two feet apart in a decent manner. After about fifteen minutes the security guards approached us and stated that couples were not allowed to sit at the Independence Square. We then asked them… why we could not sit there, and they were saying that the ‘Cultural Department’ had requested them to remove couples from the premises. We then asked them to let us know… which rule we were breaking by just sitting at the premises. They then said that only families with children or an all male group or an all female group can sit together but not a couple, specifically a man and woman cannot sit and spend time.”

When asked why such rules, if they existed, had not been on display, the couple had only been told to refer their complaints to the “Cultural Department.”

“The video was posted to share the incident among our social media network to create awareness, but we did not expect it would create a silent protest [like] ‘Occupy the Square’. It is great to know that the society is waking up to reclaim their fundamental rights as citizens of this country,” they said.

Shortly after the video started doing the rounds on social media, a Facebook page was set up by others, calling on people to join in the silent protest at Independence Square yesterday. The plan was to protest against what many call “cultural policing,” while also demand answers as to what exactly is meant by “indecent behaviour.” The turnout included Deputy Minister of Foreign Affairs, Harsha de Silva, who said he was there “on behalf of the Government.” Commenting on the issue of security officers being ordered to evict couples from public places, the Deputy Minister said that the Government held “no such policy.”

The issue was eventually taken up to the Prime Minister himself, who has now, it turns out, ordered the Ministry of Cultural Affairs to terminate their contract with the state owned security company, which employs the two officers involved in the recent controversy. However, media reports also stated that the two officers had not been fired from their jobs, although they were to be transferred, while the Director Operations of the security firm had been suspended.

MP Harsha de Silva, who attended yesterday’s protests to look into the situation, but was later criticised by some for his involvement. Image Credit: independent.lk

In the aftermath of this, MP Harsha de Silva’s involvement in the issue was criticised by some, to which he responded via social media.

Meanwhile, Minister for Cultural Affairs, S.B. Navinna, has told local media that couples engaging in “lewd behaviour” would not be allowed at Independence Square while, apparently, those who “behaved” will not be asked to leave.

While it appears that couples can now stay at Independence Square without being harassed by authorities, it is yet to be seen whether or not they will be granted equal freedom in other public areas like Vihara Maha Devi Park.

What are your thoughts on the recent incident and ensuing action taken? Have you experienced circumstances involving such cultural policing yourself? Take our survey and let us know, and feel free to leave any additional opinions in the comments section below.