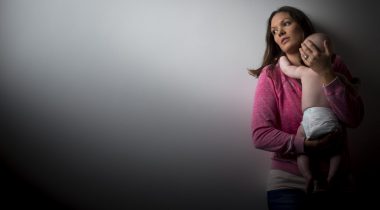 Out Of The Blue: Navigating Postnatal Mental Illnesses In Sri Lanka

Pregnancy was the best thing that ever happened to Kavindi*, a secondary school teacher, who had been trying unsuccessfully to conceive for nine years. The arrival of the long-awaited baby was met with much elation from her family, but something did not feel quite right to Kavindi. She could not sum up the appropriate amount of affection for the warm, plump little bundle that was placed in her arms. There was no instantaneous connection or instinctive love for the child. Instead, she felt tired and emotionally detached. She was puzzled. This was what she had wanted for so long, why did she not feel more enthusiastic?

Two months later, Kavindi was back in hospital with her baby, now fractious and undernourished in a grubby, cotton smock. Kavindi confessed that she had been neglecting him. “I can’t look after him,” she told the doctors, tearfully, “I don’t even want him. Sometimes I feel like I want to physically injure him, but I know that’s wrong. I feel miserable all the time. I know that these feelings aren’t rational. Am I going crazy?”

Kavindi was diagnosed with severe postnatal depression and admitted to the psychiatric unit with her baby, and placed under surveillance. Her family members were requested to come and help her take care of the child, while she received inpatient treatment for her condition. “Kavindi was lucky in that she understood that something was wrong,” said Dr. Hana Liaqat*, one of the medical officers involved in the case. “She realised that her behaviour was not normal and was potentially dangerous. Not everyone realises this until it is too late and by then, the mothers have already endangered their babies’ lives or their own lives,” she explained.

An Overview Of Postnatal Mental Disorders

Postnatal or postpartum depression is one of the psychiatric disorders that a woman may experience after the birth of a baby. Other related disorders include postpartum blues and postpartum psychosis (or puerperal psychosis). Postpartum blues or “baby blues” is the most commonly experienced mental disorder among women. It is a milder form of postpartum depression, which occurs three to five days after birth and lasts only for a short period, during which new mothers feel fatigued, anxious, irritable, emotional, and out of their depth.

Speaking to Roar about the spectrum of postpartum mental illnesses, the National Program Officer for Reproductive, Maternal, Neonatal, Child and Adolescent Health at the World Health Organization (WHO), Sri Lanka, Dr Nilmini Hemachandra said, “Forty to fifty percent of women experience postpartum blues after giving birth, because they go through a huge lifestyle change. However, this resolves [by itself] within two to four weeks [of its onset]. But if the symptoms of depression persist for more than four weeks, we call it postpartum depression. Fifteen percent of women in Sri Lanka experience postpartum depression. There are 385,000 births every year in Sri Lanka, so 15% is a large number. Women with postpartum depression experience more or less the same symptoms [as those of] normal depression. They have low self-esteem, decreased appetite, are unable to maintain personal hygiene, and they become socially withdrawn. However, these symptoms will disappear after six to eight months. Only a small portion of women will go on to experience long-term depression.”

Postpartum psychosis or puerperal psychosis is the most severe form of postnatal mental disorders. “It only happens to 0.1% of new mothers and is considered a medical emergency,” Dr. Hemachandra revealed. “Postpartum psychosis is not linked with depression or blues. A person might not have postpartum depression or blues, but may suddenly get psychosis any time within a year of the birth. There is no way to predict it.” The symptoms of this condition are similar to those of schizophrenia and bipolar disorder, and may manifest as early as 48-72 hours after delivery. Women suffering from puerperal psychosis experience confusion, fluctuating moods, hallucinations and delusions. They also exhibit severe depression or mania, and engage in irrational behaviour.

Both postpartum depression and psychosis can pose serious risks to the health and lives of both the mother and the child. “If the mother is depressed for six months, it will have an adverse effect on the baby,” Dr. Hemachandra explained. “She will not be able to breastfeed or provide the child with the necessary care. If there are other kids, they will be affected too, and it can destroy family life. Sometimes these women may commit suicide, or even kill the infant or the husband. Now that most of the other causes of maternal death in Sri Lanka have been eliminated, we have found that suicide is currently the leading cause of such deaths.”

Postpartum depression has adverse effects on the health and life of both the baby and the mother. Image credit: sheknows.com

There are a number of hormones that factor in pregnancy, such as oestrogen, progesterone, human chorionic gonadotropin, placental growth factor, and many more. Each of these hormones plays a part during the different stages of pregnancy and delivery. After the birth of the baby, some of these hormone levels, such as that of progesterone and oestrogen, tend to drop sharply. As these hormones have an influence on the brain, the sudden change in their levels may affect the brain’s activity and function, leading to behavioural changes and emotional disturbances in the new mother.

“We need to educate husbands and families of new mothers [about the symptoms of postpartum mental disorders],” said Dr. Hemachandra, “So if they feel there is anything strange or different about the behaviour of the mother, they will be aware that they have to refer the patient to a doctor and get professional advice.”

Some of the symptoms of postpartum depression are:

While postpartum mental illnesses can affect any woman after the birth of a baby, there are several risk factors associated with these disorders. “If the woman has no family support, or has a previous history of depression or some kind of mental illness, and has had no treatment before or incomplete treatment, then she is more prone to developing postpartum depression,” Dr. Hemachandra said, adding, “also, if the woman has been subjected to some kind of domestic violence, she can develop postpartum depression after delivery. Single mothers, too, are at risk, because they may not have any support [in taking care of the child]. However, these are precipitating factors, not the reason for the illness.”

Other contributing factors to the development of postpartum mental illnesses are believed to be genetics, stressful life events, complications during pregnancy or delivery, sleep deprivation, difficult infant temperament, or having an infant with health problems or birth defects.

It is important for new mothers to have a supportive environment, in order to help them navigate the pressures of motherhood. Image credit: malibuvista.com

The Edinburgh Postnatal Depression Scale (EPDS) is the most widely used screening tool for postpartum depression in the government health sector in Sri Lanka. The EPDS, a ten-item questionnaire that describes depressive symptoms, was first introduced as a routine screening process in all national hospitals in 2012, by the government. It helps identify women with postpartum depression based on their responses to the questions.

“The EPDS is available in all three languages, English, Sinhala, and Tamil,” Dr. Hemachandra said. “It is very easy to administer. Since our literacy rates are very high, it’s easy for women to fill it out.” However, the use of the EPDS alone may not be timely enough in the identification and treatment of postpartum depression. Early detection and diagnosis is important for the effective management of the condition. In order to facilitate early identification, Dr. Hemachandra revealed that the government is planning to launch an antenatal screening tool for depression on World Mental Health Day in October this year.

Once a woman is diagnosed with postpartum depression, treatment is the next step. Some of the treatments available include counselling and antidepressant medication. Treatment for postpartum psychosis include antipsychotic medication, mood stabilising drugs, and/or electroconvulsive shock therapy. According to Dr. Hemachandra, treatment is now available in most hospitals in Sri Lanka, as opposed to the recent past, when psychiatrists could be seen only in major hospitals. “There are clinics even in district hospitals now, where mothers who have been screened positive for postpartum depression can go for treatment,” she said, “People need to understand that any woman can get postpartum depression. It is a natural thing and there is treatment for it. With counselling and a strong support system, these women can get back to normal.”

However, the diagnosis and treatment of postpartum psychiatric illnesses are largely compromised by traditional beliefs and fear of social stigma. “When new mothers start behaving abnormally and hallucinating, people tend to think that she has been [possessed] by an evil spirit. So instead of seeking medical or professional help, they go to traditional healers and [seek treatment through] mantras,” said Dr. Hemachandra, “[As for stigma], it is the same as for any other mental condition. People are afraid they will be called “pissu” so they refuse to go to the doctors. That’s why we usually administer these [EPDS] questionnaires as a routine practice when the mothers come to the clinic. Since they are given to everyone, [it eliminates some of the stigma].”

The stance of Sri Lanka’s health sector on postnatal illnesses

“There is a lack of awareness of [postpartum depression] in our society,” says Sumaiya Iqbal, assistant psychologist at the forensic ward of the National Institute for Mental Health, and the founder of Introspection, a mental health organisation. Speaking to Roar about the approach of our national health services to postpartum depression, she revealed that there is a paucity in awareness of the postpartum screening procedure, even among some of the healthcare workers in Sri Lanka. “Although our government hospitals do administer screening tests for postnatal depression after delivery, some of the health professionals I spoke to were quite unaware of this process. The private sector, on the other hand, does not pay any attention whatsoever [to the mental health of the mother],” she noted, adding that the mental wellness of the mother is not prioritised by the country’s healthcare system, except in severe cases, such as those in which the mother attempts to harm herself or the child, or exhibits other signs of psychosis.

Iqbal also stressed on the significance of psychotherapy in the treatment of women with postpartum depression, saying, “Currently, drug therapy and electroconvulsive therapy are most commonly used to treat postpartum depression [in Sri Lanka]. However, these interventions don’t prepare the patient to face the same condition in the case of a relapse. This is where psychotherapy plays a vital role. It helps prepare the individual to cope with the challenges that they may come across later on in life.”

She concluded, “Mothering an infant is not an easy task, and it requires a massive amount of time, energy, and patience. A new mother might have thoroughly prepared herself for her role, but she may still struggle to adjust once the baby is born. Therefore, it is essential for the people around her to understand [the change in her life], provide the necessary support, and be sensitive towards her emotional state. Postpartum depression is a lonely condition that women in our society are not encouraged to share. Therefore, it is important for us to reach out to them and [let them know that] they are not alone.”

(*Names have been changed to protect the privacy of the patient)