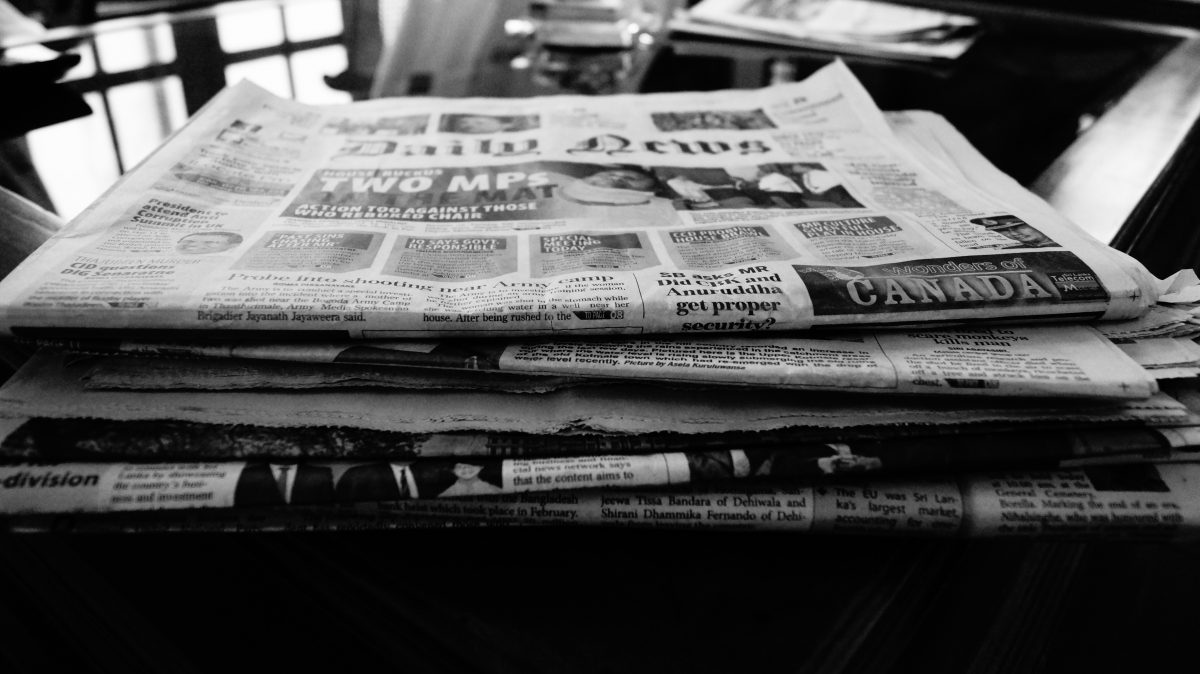 As high as internet penetration is in Sri Lanka, a majority of the country’s population still gets its news from the press ‒ particularly in the vernacular. A recently established media watchdog called Ethics Eye has taken it upon itself to keep tabs on the Sinhala and Tamil press and watch out for any gross violations of universally agreed upon journalistic ethics.

Let’s take a look at some of its findings.

Tragedies Are The New Sex

The mainstream media’s response to the recent train accident that saw the untimely demise of two young girls left a lot to be desired. According to Ethics Eye, six out of seven Sinhala newspapers emphasised the two victims’ physical attractiveness ‒ which, needless to say, had nothing to do with the unfortunate incident. These included the state-run weekly the Silumina and the newspaper with the widest circulation the Lankadeepa. The only national newspaper, according to Ethics Eye, to refrain from highlighting the girls’ appearances was the Lakbima.

The English press, meanwhile, although it did not dwell on the girls’ looks, did take the liberty to publish their private photographs. A state-run English weekly had rather insensitively called them ‘wilted flowers,’ a spokesperson for Ethics Eye told Roar.

In the event of misinformation, those victimised are encouraged to send a right of reply to the newspaper. Image courtesy Ethics Eye

Ethics Eye points out that nowhere in the entire paper was a comment from Sampanthan accepting or denying this potentially damaging allegation.

“At the very least, carry a line saying ‘said person was unavailable for comment,’” said the spokesperson who wished to remain anonymous.

As per existing guidelines as spelt out by the Press Complaints Commission of Sri Lanka (PCCSL) in their own code of ethics, in the event of misinformation, those victimised by it are encouraged to send a right of reply to the newspaper in question, and the paper, in turn, is expected to carry a correction and/or apology, depending on the severity of the allegation.

When reporting criminal activities of a sexual nature, the press is encouraged to keep things strictly PG. According to Ethics Eye, a Tamil newspaper recently saw it fit to go into detail of a rape victim’s physique. The Sinhala press is also known for its liberal use of adjectives like රූමත් (beautiful) to describe victims of sexual abuse.

Words like දූෂණය and කෙලෙසනවා have negative connotations that imply that a rape victim is no longer “pure” and is therefore unfit for civilised society. This, the Ethics Eye spokesperson points out, sets a dangerous precedence that could prevent silent sufferers from coming forward with their stories. A healthier, more respectful alternative would be a word like අතවරය or ලිංගික අපයෝජනය.

When it comes to rape, it is imperative that the victim isn’t identified by the media ‒ particularly in the event said victim is underage ‒ unless revealing such information is absolutely essential to bringing about justice.

Avoid naming victims of sexual violence, or even underaged suspects, when reporting crime

Too often, suspects have been labelled murderers, rapists, or robbers by the press, long before they were even produced in court. Suspects’ personal details are published without a second thought about how damaging it can be to his or her future ‒ even when they are underage ‒ in a media frenzy of kangaroo court justice. The Seya fiasco comes to mind.

The Ethics Eye spokesperson told Roar that according to the body’s guidelines, no underage suspect should be named in a manner that could risk their school education.

Print Inaccurately And Be Damned

This one’s a no brainer. Accuracy is one of the fundamentals of journalistic ethics. Distorting news  ‒ or bending the truth  ‒ is actively discouraged among the media fraternity.

For example, according to Ethics Eye, unverified – and, as it turned out, blatantly false – reports that the two girls involved in the train accident had been wearing headphones led to an explosion of opinion pieces on the dangers of headphones.

Ethics Eye is currently in the process of listing instances of gross inaccuracy in a series of subcategories  ‒ namely, corrections and apologies, confidential sources, journal reporting and writing, privacy, intimidation and conflict of interest.

If You Must Be A Jingoist, Keep It To Yourself

Both Sinhala and Tamil newspapers are guilty of carrying sensationalist, ultra nationalist headlines that could potentially spark communal and/or religious violence. As part of their extensive research, Ethics Eye has discovered articles about federalism, for example, that invariably and needlessly drag a Tamil politician’s name to it purely to establish a link that isn’t really there. More often than not, said politician has no connection whatsoever to the subject matter covered in the article.

A few questions for you…

Let us know in the comments if you have any views or suggestions on the subject of media ethics.