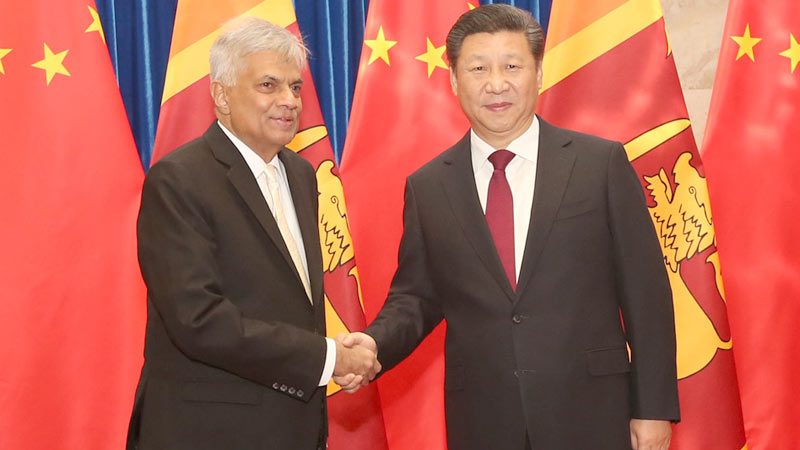 Prime Minister Ranil Wickremesinghe’s official tour in China last week saw seven agreements being signed between China and Sri Lanka, leading to many a newspaper dedicating column inches to the intricacies of humble pie. Roar decided to do a quick breakdown on what’s been going down.

Among the agreements signed was a Comprehensive Implementation of Investment, Economic and Technological Agreement (CIIETA) between the two countries, not unlike the controversial ETCA document to be signed between India and Sri Lanka.

According to the official government news portal, the CIIETA seeks to encourage Chinese investors to promote investment in Sri Lanka through “non-traditional financial methods by directing the relationship between the two countries in a new path.”

Not A Complete Sellout

One thankfully salient clause in the agreement makes it mandatory for Chinese investors to provide proposals including feasibility studies and commercial documents to the Sri Lankan authorities before going ahead with a project. This means that any Chinese backed development project will have to be greenlit by the Government after careful consideration of its ability to generate revenue and not be a colossal white elephant. A joint task force will also be established to oversee these projects.

During his visit, Wickremesinghe’s Chinese counterpart Li Keqiang promised a grant of 500 million yuan to the Government to “speed up industrialisation,” and Sri Lanka, in turn, has promised to support the One China policy and Beijing’s so called One Belt, One Road concept.

One of the highlights of the discussions was the second phase of the ‘Hambantota project.’ This is expected to include, among others:

The stated goal of this exercise is to strengthen Sri Lanka’s position as an important logistics hub.

Polonnaruwa, Because Why Not?

Not to be outdone, Polannaruwa too will reap certain benefits from the CIIETA, in the form of an integrated development scheme for the district that will include road and railway networks in addition to agriculture land development.

Among the various projects name-dropped in the agreement, according to media reports, is the on-again-off-again Colombo Port City, the Megapolis mega-urbanisation drive, the proposed Colombo-Ratnapura expressway and phase IV of the Central Jaffna highway.

Meanwhile, the Cabinet has also granted approval to the Central Bank of Sri Lanka to enter a memorandum of understanding with the China Development Bank that will facilitate a currency swap of USD1 billion and fresh loans between the two countries.

Chinese media quoted Wickremesinghe as saying the strategic partnership of cooperation featuring sincere mutual support and long-lasting friendship is in the interests of both Sri Lanka and China. “It is also a consensus of all political parties in Sri Lanka. He appreciated the positive role played by China in promoting global economic stability and growth, and thanked China for its long-term assistance to Sri Lanka.”

A Yuan For Your Thoughts

Now that China and Sri Lanka have formally mended bilateral relations that were somewhat strained in the wake of the change in government from the [some would say excessively] pro-China Rajapaksa regime to the traditionally pro-capitalist UNP-led coalition, it’s interesting to note how the rhetoric has changed from markedly anti-China to “the devil is not as black as it’s painted.”

Let us know what you make of it.