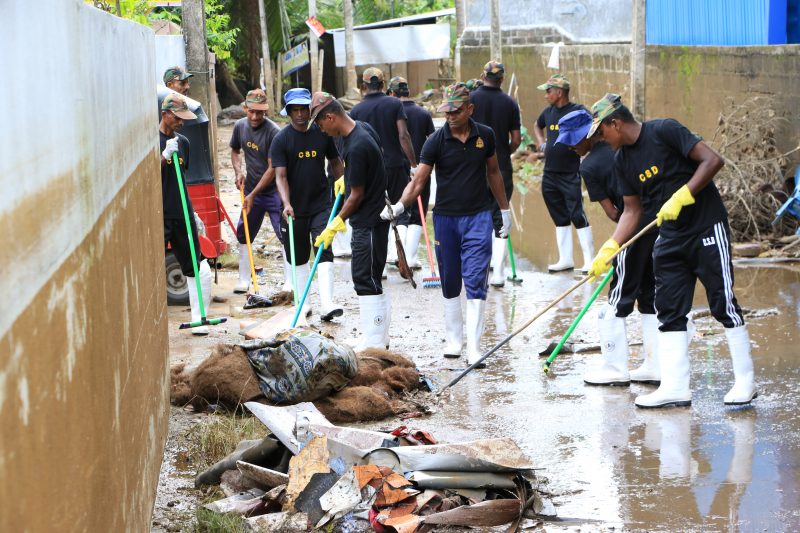 The island is still reeling from the devastation left behind by the floods. As clean-up operations were underway full swing over the last week, in the city, another problem raised its ugly head. After nearly a week of water levels that refused to subside, the residents of Colombo, especially those around Meethotamulla, saw their residences and surrounding areas inundated in garbage.

Polythene in particular, and garbage in general, was one of the major reasons the water levels refused to subside during the flood week. Although the waters have now receded and a semblance of normalcy seems to have returned to many parts of the city, the garbage is still a problem. Even more worrying, is the threat of illness and disease posed by the uncleared garbage.

Rubbish carried around by water during the floods. After the waters receded, all this garbage ended up on the roads, and worse, in people’s houses. Image credit Thiva Arunagirinathan.

Even before the floods, Meethotamulla was an area that had its fair share of problems. A primary dumping site for the entire city’s garbage, the area’s residents have been trying to raise awareness about the issues they face on a daily basis, for quite some time now. Then the floods struck, and problems have reached another, more troubling, level.

Nandasiri, who lives right next to the Meethotamulla dump site, found his house not only completely inundated with water, but strewn with garbage from the dump piled up next door as well.

Nandasiri was not the only one. Over 300 families who live next to the dump fell victim to the brutal floods and the garbage they brought along. Two weeks have elapsed and yet, nearly 80 families have not ‒ and cannot ‒ return to their homes.

In Nandasiri’s case, his house was still standing, but all the possessions had in his one-bedroom wooden house were lost.

“We’re not rich people. That is why we live in wooden houses next to a garbage dump. What little possessions we had, like the refrigerator and the small television, were all lost to the floods,” he said, adding, “Now our house reeks of garbage.”

The majority of the cleaning activities are being carried out by the Civil Defence Force (CDF) under the President’s orders. According to CDF spokesperson Major Vajira Kumarathunga, almost all flood affected areas have been cleared as of yesterday (June 2), save several areas around Kolonnawa and Wellampitiya. However, the clearing of those areas are nearing completion as well. The task proved to be difficult, as the garbage accumulated tends to aggregate into larger piles within hours of removing piles of garbage on the road.

The clean-up process appears to be two-fold: cleaning up of roads and public spaces, and cleaning of residences. For the most part, the former aspect seems to be under control.

Speaking to Roar, Colonel Nanda Madugalla of the CDF, who is in charge of the cleaning process in Kolonnawa, said that everyone who was victim to the floods is now throwing away their destroyed possessions on to the roads and the CDF engaged in cleaning the areas will collect this garbage.

“The biggest problem the aftermath of the floods posed was the fact that there was a large accumulation of garbage. The Government, along with us ‒ the triforces ‒ and the Provincial Councils, all have a hand in the cleaning up process. Right after the floods, the garbage was such that there were easily around 460 truck loads full,” he said He also explained that “what happens, is that the people clean their houses and dump all the garbage on the road side. What we do is clear these roads. We collect the garbage and dump them into the designated areas.”

He further noted that the dump site in Meethotamulla was becoming congested due to the amount of traffic heading towards it, and the designated vehicles in use were inadequate.

Colonel Madugalla added that apart from the Meethotamulla dump, a small dumpsite behind a cemetery in Mulleriyawa and another ground was also used to dump the additional garbage.

“We only have three backhoe loaders. We need more. Therefore we requested for more. We also have a disposal issue. We cannot use the Meethotamulla site for all the garbage. So we alternated between a cemetery in Mulleriyawa and a ground as a temporary dumping point. We have spoken to the relevant authorities to sort this out. We have deployed many CDF personnel to Brandiyawatte, Kuda Buthgamuwa, and Ambatale Road, where the cleaning is taking place. The monsoon rain is also helpful to some extent, although it slows down our team. The rain washes away traces of garbage making matters easier for us. At the same time, it makes it muddier too. More equipment will help us speed up the process and establish some degree of normalcy for the people in these areas,” he said. The CDF has also been actively cleaning up public spaces like playgrounds, and sometimes even residences in flood affected areas.

While the authorities are doing their best to clear up the roads, this alone is proving insufficient; those like Nandasiri still have to suffer the worst consequences of the floods, because their very homes have not escaped the garbage dilemma.

“It’s been two days since we returned to what’s left of our homes. When we came in, the entire living room resembled a version of the garbage dump. The Municipal Council came and helped clean up the roads, but there is no one to help clean up our homes,” he said.

The CDF may be hard at work cleaning up, but the problem of where all the garbage goes is something only higher authorities can find a solution to. Image courtesy CDF

Minister of Provincial Councils and Local Government, Faiszer Musthapha, addressing the media at a press conference on Tuesday (May 31) said that the Government had allocated Rs. 18 million to get rid of the garbage that had accumulated due to floods.

“As per the suggestions of the Ministry of Disaster Management, we will be commencing a programme to properly dispose all the garbage collected due to these adverse weather conditions at Kolonnawa and Peliyagoda, involving all the Provincial Administrative bodies. This particular programme comprises of establishing an Operations Committee at the Umagiliya Ground in Kolonnawa as well,” he said.

He also noted that if this Operations Committee is not established, it will take approximately a whole month to completely dispose of all the garbage collected in these areas.

At another press conference held on the same day, Minister of Disaster Management, Anura Priyadharshana Yapa, said the garbage crisis that was exacerbated by the floods in Kolonnawa will be solved in three days.

However, it’s been over three days, and the crisis still persists.

The Minister added that a joint programme by all the local authorities would be implemented to achieve this feat. The garbage collected thus will be disposed of elsewhere as a temporary solution to the pile-up, pending a permanent site being selected.

He added that all necessary steps will be taken to establish normalcy for the affected population of Kolonnawa.

Yapa also added that necessary measures will be taken to clean the canals in Kolonnawa and other areas in close proximity to the Kelani River.

Minister of Irrigation, Vijith Vijithamuni Soysa, who also addressed the media briefing, added that the Government had taken steps to reconstruct the river bunds, and that this has been incorporated into the Megapolis plan.

The Civil Defence Force teams working within the limits of Kolonnawa and Kotikawatte also conceded that garbage disposal was a major issue in the area, especially because the Meethotamulla garbage site was not available for dumping.

Taking all this into account, it is evident that state authorities still have their work cut out for them, and need to prioritise coordination of clean-up efforts ‒ and they need to do it fast, because there could be some rather serious concerns on the horizon.

The Meethotamulla garbage dump site – a threat to nearby residents on any normal day, and much worse after the floods. Image courtesy writer.

The threat of disease during floods was an issue Roar explored in detail previously, during the height of the flooding; more than a week later, the problem still persists.

As pointed out by CMC Chief Medical Officer, Dr. Ruwan Wijemuni, at a press conference last week, if a solution is not found to the garbage issue soon enough, it could lead to a serious pollution problem, which could in turn result in the outbreak of diseases.

“If garbage dumps are not covered with layers of soil, it could lead to the spread of infection even to areas far from the dump,” said Dr. Wijemuni.

However, residents of the Meethotamulla area said that when the authorities laid soil over the garbage dump in an attempt to stifle the smell, the dust covered the entire neighbourhood.

Meanwhile, speaking to Roar, Director General of Health Services at the Ministry of Health, Nutrition and Indigenous Medicine, Dr. Palitha Mahipala, said that although epidemic disease outbreaks have not been reported yet, we aren’t entirely out of the danger zone.

“The risk [of disease] is very much apparent. Many young children and senior citizens are prone to be victim of diseases like fungal infections and respiratory diseases,” he said.

Residents of these areas have faced several health threats in the past, too. As Dr. Wijemuni of the CMC said at a recent press conference, most of the recent dengue-related deaths were reported from Modera and Mattakkuliya, which are close to garbage dumps.

Leptospirosis (rat fever), hepatitis, and water-borne diseases are some of the diseases found in neighbourhoods where there are garbage dumps, while elderly persons and children suffer from respiratory diseases such as asthma. “The air in these areas is highly polluted, and inflammable methane gas forming over the dumps could result in an explosion,” he said.

Dr. Mahipala said that while there were several dengue related cases reported, there has been no alarming increase noted. However, he did go on to say that “the proper disposal of garbage is essential to avoid dengue from taking root,” adding that “teams which include a doctor and a Public Health Inspector (PHI) have been appointed to make sure this [proper disposal] happens.”

Deputy Director of the Public Health Services Division, Dr. Sarath Amunugama, told Roar that authorities have provided chlorine and other disinfectants to the flood victims in order to avoid an outbreak of waterborne diseases. When we visited the area this week, several residents who live around Meethotamulla did say that they did receive disinfectants such as dettol and chlorine. Yet, the plight they are faced with now, their homes strewn with water soaked rubbish, leaves them feeling extremely disheartened.

While the efforts of the authorities, such as the CDF teams, must be appreciated, this is evidently a problem that continues to need attention, and must be resolved at the earliest. After all, the Meethotamulla garbage dump has been a serious concern, and not just an eyesore, for over a decade. Keeping this in mind, here’s hoping authorities make good on their promises, and take steps to ensure the problem does not arise again ‒ especially with monsoon season now upon us.