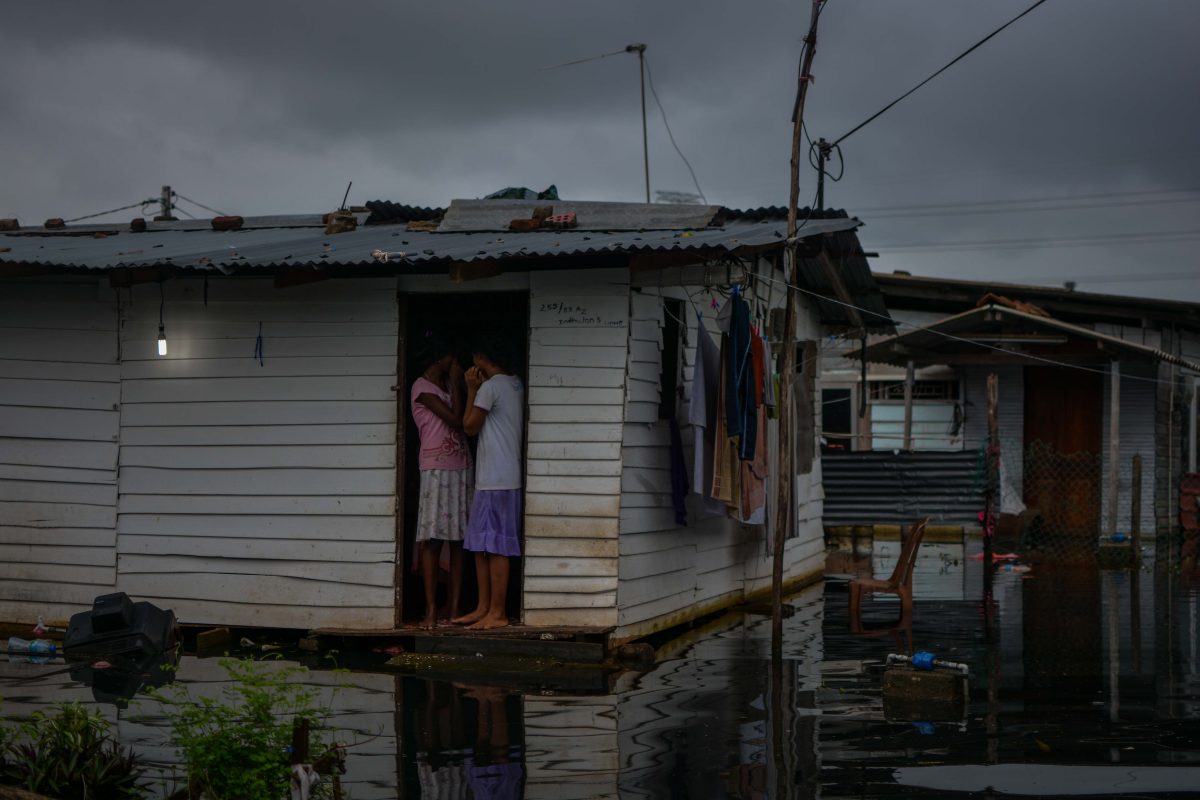 Post-flood Stories: Challenges For The Displaced

This past week has indeed been exhausting for many Sri Lankans. The sudden floods and landslides the island experienced ended up killing dozens, and displacing hundreds of families. Those displaced have received temporary shelter at over 200 camps in different parts of the country, until their houses are in a suitable condition to return to ‒ or until they find new places to live. As latest DMC numbers show, 531 houses have been completely destroyed.

Roar visited some of the temporary camps set up on the outskirts of Colombo to speak to the affected families about their ordeals. Most of them have lost nearly all of their belongings, save for the clothes on their backs. Many of them complained that they were yet to receive Government aid, while others said that what little aid they initially received through private relief efforts was withdrawn when Government officials took over.

“There Is No Proper System Here”

Wanitha says that when the floods struck, the water levels reached as high as her waist.

Thirty-three year old Wanitha is seven months pregnant with her first child. She was among those displaced when the floods hit her home on May 16.

“My husband and I lived in a rented house for several months and we were told that the house doesn’t usually flood. We were getting it ready for our first child, and then the floods hit without warning.”

When the floods struck, Wanitha attempted to contact the emergency numbers provided by the Government for assistance, to no avail. “When the water reached as high as my waist, my husband and I were sitting on a wall. We yelled for help and a few boys brought a tube boat and helped me onto it.”

Upon reaching the camp, Wanitha’s husband saw that the place was unfit for a pregnant mother, particularly when they were expecting their first child.

“My husband told me to go stay with my sister because they were admitting pregnant mothers to the hospital and I didn’t want to go stay in a hospital,” she said, adding, “this camp is not a place for someone like me. There is no place to sleep, no sanitation, nothing. And when they hand out donations, the people who put up a fight, and force their way to get in front of the lines end up getting most of the donations. But I can’t do that so we don’t get them. There is no proper system here, not even in the distribution of food. They asked us to register [as displaced], but then we can’t register here because there is no space.”

“After the water goes down we will have to go back and clean up. My husband said he will go check the place and start the cleaning up. He told me to stay with my sister for a week or two until the place is safe, because I have to be very careful with my child.”

“I Think My Books Are Floating In The Water”

Niroshini will be sitting for her scholarship exams this year. She fears her books may have been swept away by the floods.

The camp was packed, especially with children running about playing. Ten year old Niroshini edged closer, curious as to what we were doing. As it turned out, she was happy to share her story with us.

“Each year when it rains, our house floods. The water usually comes up to our ankles but last year my school books were destroyed because they fell into the water. So this year, because I have my scholarship exams, Appa fixed a few shelves high enough so that they would be safe from floods, but not too high for me to reach.”

Niroshini’s father’s endeavour, however, proved to be in vain when the water levels reached an unanticipated level. “Last Sunday it rained a lot and the water was nearly up to our ankles when we went to sleep. The next day also it was the same. This was normal. But that night Amma woke us up because the water was covering the bed too. I thought nangi had wet the bed again but she hadn’t. That was when several boys from the neighbourhood brought in tube boats and helped us through the water. My little sister was sent on it first because she was small, and then after that Amma and I went on it. Appa went to help the others get away from the water and we were brought here. I think my books are now floating in the water.”

In spite of this, Niroshini told us that she hopes to achieve really good results at the scholarship examination, no matter what.

“I Don’t Even Have Milk Powder To Feed My Son”

Mary’s baby is only three months old, and is in need of essentials like milk powder.

Twenty-one year old Mary is from Sinhapura, Kolonnawa. She is the mother to a three month old baby.

“When the water came, the Navy came to our aid. They bundled up my baby and helped me onto the boat, and then we came here because this was the closest place we could stay at. But I don’t even have milk powder to feed my son.”

Mary, her baby Seyan, and her husband, are staying in one of the classrooms, along with several other families, in the Wellampitiya school that is now a temporary camp. However, Mary’s plight is that while the donors provide food for the adults, her child rarely receives any attention. Nor do they get clothing, bedsheets, or any other essential items a baby would need.

“The classrooms we’re staying at are situated at the back. Because of that, we don’t receive anything. Only those who are in the front and those who fight get the things they want.”

“No One Came To Our Aid”

Manel worries that her home may have fallen victim to looters.

Forty-four year old Manel lives with her daughter and husband in Nagahamulla, unfortunately close to the Meethotamulla garbage dump. According to her, no one from the Army or the Navy came to their rescue.

“We were eating rice on the 16th, and without warning, the water started to rise at a rapid pace. No one from the Army or the Navy came to our aid so we had to pay Rs. 600 to some people who owned a rubber boat, and with their help we managed to get to dry ground. One of the boys who helped us almost drowned too.”

When we inquired about the present water levels, she said, “They say it might have gone down a bit, but I don’t know. We live right next to the garbage dump and we heard that the garbage was floating in, too. All of our stuff is in the house. All we brought was what we’re wearing right now. We have been here for over a week now, but I was thinking of going tomorrow to see. Who knows if the house has been looted, or if it’s even still standing?”

Nothing Left To Scrounge

Khairun Nisa feels that the aid operations at her camp are disorganised.

Seventy-three year old Khairun Nisa lives in Megoda Kolonnawa, Wellampitiya, with the families of her two sons, and a daughter.

“We have three families living in our house. One son works for the forces and the other for the Municipal Council. Their clothes are all destroyed. Tomorrow I’m going back with a bottle of Dettol to see if I can clean everything up,” she said, adding, “We’ve experienced river water, and we’ve experienced rainwater, although our house doesn’t get flooded that easily. But this time we were not so fortunate. We have five children living with us, and the eldest is doing her scholarship exam this year.”

Khairun Nisa also said that no one from the Government came to their aid even after tragedy struck. “At the start no one, not one Minister came to our aid. The President made a visit, and after that the Army came and took control. I don’t know who is controlling this any longer, but it is very bad. They don’t have any method or proper process in giving us food, or even a piece of cloth. Earlier there was a private organisation who took care of things and they took care of everything beautifully. But then someone else took control and now we receive nothing. Not even a cup of tea. All we have is the clothes on our back.”

State authorities do have their work cut out for them. Nobody expected a disaster of this magnitude, let alone the weeks of damage control that lie ahead.

Last week, addressing the media, Minister of Disaster Management Anura Priyadarshana Yapa, said that the Government and the Ministries are doing their utmost to help the affected and the displaced.

He also added that the tri forces that were deployed to the affected areas were risking their lives to assist the victims, especially in the landslide prone zones.

Despite state efforts, the Minister said, there were many families that were stranded in their homes due to floods, and were only rescued by the boats provided by private organisations or other individuals. Some others were reluctant to leave their property or, in other cases, they were not reachable, he added.

“We used boats with the help of the Army and the Navy, and when the boats were not enough, we hired boats from fishermen. But there were some roads the boats couldn’t go through because the roads were too narrow. In these instances we used the Air Force to airlift people out,” he said.

In spite of state authorities assuring the public that they are doing their best, flood victims currently in camps evidently feel that they are also the victims of poor organisation efforts.

Roar contacted the Deputy Director of the DMC, Pradeep Kodippilli, for an official response regarding the allegations made by several of the displaced. This is what he had to say:

“Every camp has an officer from the DMC to oversee the activities and it is up to that officer to make sure each person receives a fair amount of essential items. However, some fault lies with the people too. While we have received such complaints that the people haven’t received any donations, we discovered that they were in fact asking for more. Nevertheless, we will look into the matter and inform the officers in charge,” he said.

While it may seem like the worst is over, for many of the displaced, the challenges that lie ahead are steep. Even now, those in camps face daily struggles. There is also much to consider where the resettlement process is concerned, as a large number of those affected come from low-income backgrounds, and many may now have to start over completely.