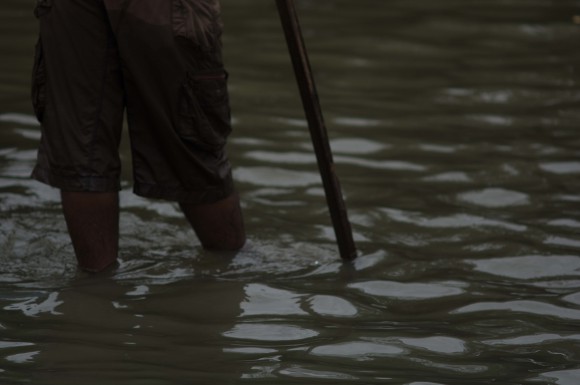 With the floods finally showing signs of receding, some attention must be paid to managing the disaster past the immediate relief efforts. The spread of disease is a significant threat after any flood crisis, and it’s important to be informed on what’s at high risk of spreading.

Sri Lanka was hit by the worst flooding in 14 years. As relief efforts are underway, people have been cautioned against the spread of disease. Image credit: AFP/Ishara S. Kodikara

Speaking to Roar on Tuesday (May 30), Mahieash Johnney of the Sri Lanka Red Cross said that they had not released any specific health warnings yet, but that people needed to be informed of basic health precautions. “It’s vital that the ones who are safe educate themselves so that they can assist someone. It’s always nice if they know some first aid… It’s not the medical attention that is required, it’s that action [first aid] that you take to safeguard that person until [they receive] proper medical attention,” he said.

What To Watch Out For

According to Dr. Bodhini Samaratunga, who has been working on the ground in the affected areas, there are several diseases to be on the lookout for:

Leptospirosis is an infection caused by the Leptospira bacteria. It’s a disease well-known in Sri Lanka, with the earliest confirmed case being recorded in 1959. It is commonly known as Mee Una (Rat Fever), after its best-known vector.

The most common method of infection is humans coming into contact with water or soil that is contaminated by an infected animal’s urine. The bacteria will enter the body through breaks or wounds in the skin, or if ingested, through the soft tissues of the mouth. If one is submerged in contaminated water, the bacteria may enter the body through the eyes or nose. With many bodies of water mixing together in the flood, the spread of infection is a grave possibility.

According to the Ministry of Health’s Health Education Bureau, the illness typically progresses through two phases:

The first phase—flu-like symptoms—includes headaches, muscle aches, anorexia, malaise, and eye pain exposed to bright light, followed by chills and fever. Watering and redness of the eyes can also be present. Swelling of the liver and spleen (Hepatosplenomegaly) and abnormalities in the size, number, and consistency of the lymph nodes (lymphadenopathy) may occur. Skin rashes may accompany the above symptoms as well.After a few days of relative health, the second phase begins. This brings fever and aching, along with stiffness of the neck; in some cases, patients develop serious inflammation of the nerves to the eyes, brain, and spinal cord (meningitis). It may also cause right upper abdominal pain.

If you are a rescue worker or a flood victim constantly in the flood water, the recommended course of drugs to prevent Leptospirosis is 200mg of Doxycycline once a week, taken three days before stepping into water or three days after stepping into water. If you are unable to obtain Doxycycline, it is recommended that you take 500mg of Azithromycin once a day for three days of each week. However, these are not to be given to pregnant and breastfeeding mothers or to children under the age of eight.

It is difficult to accurately diagnose a fever by measuring body temperature by hand in these situations, so it’s best if a thermometer is used. Paracetamol is prescribed if the temperature exceeds 98.4F. Paracetamol use should not be abused, especially in the case of young children.

Anyone with open wounds should be kept away from flood waters. The risk of infection is almost a certainty as flood water is contaminated with everything from sewage to hazardous materials.

These are also diseases that spread in unsanitary conditions. The biggest danger with these is dehydration. Often patients admitted to hospital late will be severely dehydrated because of the fluid loss. The frequency and nature of nausea and diarrhea should be noted by the patient or by a responsible family member. This will greatly aid doctors in diagnosis and treatment.

Mothers who are using formula to feed infants should stop and breastfeed instead. Without proper sterilisation of infant bottles, infants are at high risk of contracting diarrhea. If breastfeeding is not possible, strained solid food or rice congee are suitable substitutes.

An unusual remedy is probiotic yoghurt. Diarrhea ejects helpful bacteria that protect our body. By ingesting probiotic yoghurts, capsules, or sachets, you can reintroduce such bacteria to the body. With such treatment, it’s possible to recover from diarrhea without the use of drugs.

This can be a result of conditions such as diarrhea or simply a result of not having access to fresh water. Supplements such as Jeewanee are recommended. Always use boiled and cooled water, especially if recovering from illnesses.

Rashes are also common after exposure to dirty water for long periods. Aqueous cream is one course of treatment. Washing with a diluted solution of Condy’s crystal is also recommended.

We urge you not to take drugs without the recommendation or prescription of a medical professional. This knowledge is disseminated for awareness purposes only.

Dr. Milinda Salpitikorala, who has also worked in flood-affected areas, said that with overcrowding, certain illnesses like diarrhoeal diseases can set in. Therefore, hygiene in the camps and temporary shelters will have to be maintained with proper sewage disposal and by using antiseptics for cleaning. Insect control through proper disposal of food waste will be very important, especially with regard to mosquitoes and flies.

Speaking to Roar on Tuesday, the Epidemiology Unit of The Ministry of Health said that there have been no signs of epidemics in the relief camps and that they are continually advising the public on preventative measures. The Ministry recommends the public to:

The Disaster Preparedness and Response Unit of The Ministry of Health told Roar that the risk of diseases spreading is—as of now—still low. Medical officials are surveilling the situation in affected areas and no signs of an epidemic have been reported. According to them, adequate Doxycycline stocks have been sent to the affected areas by the Ministry of Health and no cases of Leptospirosis have been reported either. However private collection centres have been asking for Doxycycline as well as other medicines.

Despite such assurances, there is a possibility that a health crisis may occur. We urge everyone in affected areas to stay safe, be on the lookout for signs of illness, and solicit medical advice and treatment where possible. Donors can contact their local aid centres and see what medicines are required. You can find a list of aid centres here.

The Sri Lanka Red Cross has raised concerns about diseases spreading in the aftermath of the floods and has launched an international emergency appeal for aid for USD 2.1 million. You can contact them for donations and queries from the details here.