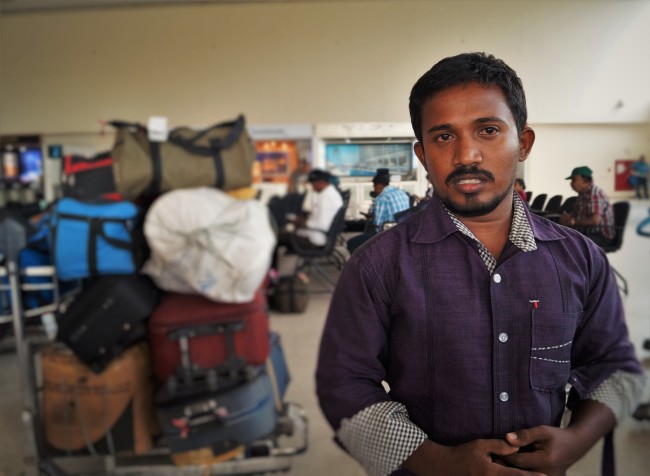 Last Tuesday (24 November), the arrivals lounge of the Bandaranaike Airport was, for a number of Sri Lankan Tamils, the first sight of home in many years. Forty two people, who had fled to Tamil Nadu in boats as asylum seekers during the civil war, were finally able to return to Sri Lanka. These 42 are among the approximately 5,600 Sri Lankans who have returned to the country from Tamil Nadu since 2011, with the assistance of the UNHCR and the Government of Sri Lanka. There are, however, over 100,000 more Sri Lankan refugees currently in various parts of Tamil Nadu, according to the Ministry of Resettlement. Of these, 65,000 refugees live in 109 welfare centers or camps, while others live with family and friends.

Speaking to the returnees, we understood that for the most part, they all seemed happy to be back. Some had relatives in Sri Lanka they were returning to, others had left family behind in Tamil Nadu. But they all looked forward to a fresh start in what they still considered their ‘home country.’

Anbukkarasi looked tired but seemed happy to speak to us. She was returning after nine years. “I left in 2006, with two of my sons. They were twelve and nineteen years old. We left on boats from Pesali. We had to pay Rs. 10,000 per person. It was very difficult,” she said.

After reaching Tamil Nadu, Anbukkarasi and her sons settled down in Tirunelveli. “The government (there) would give us Rs. 1000 a month. That was not enough. Apart from that, we had to find jobs,” she said, adding that she had managed to find work in a kadala (gram) company and a cotton mill. “I couldn’t just sit around doing nothing, right?”

Her two sons are now married and settled in India. “I came back because my father is not in good health,” she said.

Anbukkarasi may return to visit her sons in India at some point. At this point in time, however, she looks forward to settling down with her family in Trincomalee.

“I want to show my children our country.”

Our eyes were drawn to a mischievous little girl in a red and white dress, playing with her mother’s green shawl. Her mother, Manavadhani, said that she was happy to return.

When asked why they had left in the first place, she said, “We felt a threat to our lives, so when we had an opportunity, we left. We only wanted to live and sleep peacefully. Apart from that, we had no other desire to leave our country.”

She left the country in 2007. “My daughter was born there. But now that the troubles have ended, I want to show my children our country,” she said.

Speaking of her time spent as an asylum seeker, she said, “We don’t criticise India, they did welcome us as refugees and take care of our needs, afterall. We are thankful to the Tamil Nadu government for this. But we don’t want to live in a foreign country. So we came back. Whatever happens, this is our own country.”

“As long as it’s peaceful here, we don’t need anything else.”

Saandini, who stood with her 14 year old daughter, Threha, explained that they had first left in 1990, returned in 2004 and left again by boat in 2006 to Rameswaram. Explaining why they had chosen to leave Sri Lanka, she said, “I was scared for my children. We were scared for our lives.”

Saandini, a mother of five, said that her husband, who now has a job as a driver, had returned last year. “The country is good now, and we have family here. So we thought we should also return,” she said, adding that they will have to figure out the rest after they return to their home in Vavuniya. “We do agriculture, and I can also sew. As long as it’s peaceful here, we don’t need anything else.”

Her daughter Threha was only able to complete her primary schooling in India. When asked if she remembers anything about Sri Lanka, she smiled shyly and shook her head. “I was too small,” she said, but then quickly added “but I do remember the sea.”

Did Saandini ever think she would return to Sri Lanka? “Yes,” she said. “I had faith that we could. How could we not? It’s our country.”

Naharaj returns to his country after nearly 25 years

When asked how he felt about returning, he smiled, and said that he was very happy and that he hoped to  engage in paddy cultivation after settling down. “I worked as a coolie in India. I have three children here, one son and two daughters, and they are all in their twenties. I have a house here which my children built after returning.”

“Life here has to be good,” he added, confidently.

Pavitha speaks to her father, whom she will soon be meeting in person after more than three years

Mahalakshmi and her two daughters lived in Neervely, Jaffna but left for Tamil Nadu in 2006. Her oldest daughter Dharaniya was only two and a half years old when they left, while Pavitha was one and a half. Her husband had returned to Sri Lanka a few years ago. This was the first time in years the two girls were seeing their father.

“I want to enrol my daughters in school and educate them very well,” Mahalakshmi said happily. Dharaniya didn’t seem to share her mother’s enthusiasm, however. When asked whether she was happy to return to Sri Lanka she simply said “I got used to living there (in Tamil Nadu).”

Mahalakshmi was still waiting for her husband while we talked. They had no way of contacting him so we offered the use of a phone. Pavitha, who seemed more carefree than her older sister, dialled the number and spoke to her father briefly. “Appa, we’ve arrived!” she said. Taken out of context, those words would seem almost commonplace. From her tone, no one would have guessed that it had been years since she had seen her father.

Mangalasweri met her mother for the first time in 22 years

S. Valliamma saw her daughter, N. Mangalaswari, for the first time in 22 years. Her daughter’s reaction was explosive. She immediately burst into tears when Valliamma put her arm around her granddaughter.

Valliamma had left with her children in 1990, but Mangalaswari returned to Sri Lanka shortly after, while her two siblings stayed back in India.

“We’ve only spoken to her on the phone. She gets to see her granddaughters for the first time now,” an emotional Mangalaswari explained, adding that “I am happy Amma is back. She’s going to stay with me now.”

Of Valliamma’s six children, two are still in India. Mangalaswari’s elder daughter is incidentally 22 years old now. “Both my daughters are at campus. One in Jaffna and the other in Batticaloa,” she began but was interrupted by Valliamma who indignantly asked her “why did you send her to Batticaloa?”

“Because that’s where she was able to get (a seat for) her course,” Mangalaswari replied.

Valliamma explained that “it’s been a long time since I saw my children. I’m not going back,” at which point daughter added: “They (her siblings in India) had her all these years, now we get to have her!”

Mangalaswari also expressed that she would like her brother to return to Sri Lanka. Valliamma, however, looked worried. She said that she wanted her children to all return but she was concerned about her son getting a good job. “I don’t want him to return and just take up a coolie job,” she said.

Moorthy, another Sri Lankan who is more than happy to be back on home ground

In comparison to everyone we spoke to, Uruthira Moorthy (58) was more of a cynic. About his time in India, he explained that “they welcomed us as refugees, but after a while they didn’t even treat us like people. They only saw us as ‘Sri Lankans.’”

Moorthy’s home is in Jaffna. He travelled to Rameswaram from Mannar with his wife and son by boat. “It cost around Rs. 25,000 for three people,” he said.

For the first three months, Moorthy and his family stayed in Rameswaram. “the only livelihood available to us was fishing, and since we couldn’t fish, we later moved to the Bhavani Sagar refugee camp. When we went there, there were around 1500 families. Now there are about 1025 families there.”

Perhaps Moorthy’s cynicism had its roots in the difficulties he had to face to return. He explained that, in order to leave they needed to get police clearance but they had to bribe people to receive it. “I have complained about this to the UNHCR,” he said.

Moorthy’s family managed to sell jewellery and get help from relatives to raise the money. “But so many others don’t have this opportunity,” he said.

He spoke to us in a mixture of Tamil and (rather fluent) Sinhalese. When asked how come his Sinhalese was so good, he said that he’d picked up the language as a young boy working in Panadura. While in Tamil Nadu he’d continued to speak the language with other Sri Lankan Tamils who could also speak Sinhalese.

“I look forward to living in peace with the Sinhalese people, the Tamil people, the Muslim people… We have been Sri Lankans for generations,” he said.