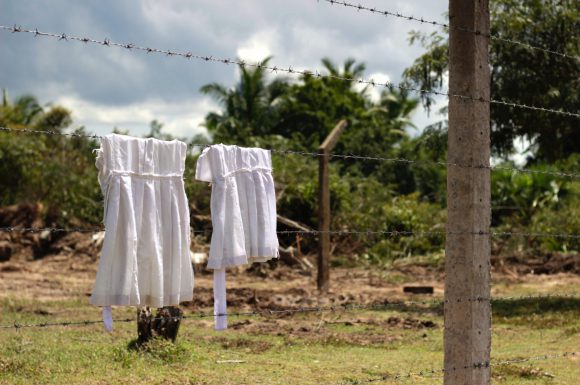 Displaced since the last stages of Sri Lanka’s civil war, returnees from the northeastern village of Pilakudiyiruppu in Mullaitivu are busy building makeshift tents where their houses used to stand. Just a few metres away, behind barbed wire, Air Force cadets can be seen ‒ playing sports on parts of the village they still occupy.

Less than a week ago, following 30 days of relentless protest and an order from President and acting Defence Minister Maithripala Sirisena, the Sri Lanka Air Force released 54 acres of land it had been occupying, in the Keppapulavu Division of Mullaitivu, since the end of the civil war in 2009.

It was supposed to be a joyous occasion for a beleaguered community that has spent the post-war era toiling away at the Menik Farm IDP camp, and later, at an Army-built model village in nearby Seeniyamottai. However, resettlement has brought with it a host of new challenges to overcome.

Leader of a newly established community organisation, Saminathan, explains that the struggle is far from over. “Everything we remember is gone. Half the wells are destroyed. What is left, we don’t trust enough to drink from. There are no houses left standing, no toilets, and no government agencies to help us rebuild,” he says.

Mylvaganam (49) is a single father of two, whose family was displaced in 2008. A year later, during the last stages of the war, his wife went out to buy groceries one day and never returned.

Mylvaganam (49) is speechless, standing on the ruins of his childhood home. The structure has been demolished so thoroughly that even the foundation is irredeemable, the land surrounding is pockmarked ‒ a telltale sign of uprooted trees.

“After displacement, I was forced to work as a coolie to provide for my family, while my mother stayed at home to take care of my children. We were all excited to return to our ancestral land and cultivate together again, but my mother couldn’t stop crying when she saw our house destroyed and our trees gone,” says Mylvaganam.

“I had planted 52 coconut trees on my land before being displaced. The income from their harvest helped sustain my family, but now there are only 15 trees left. I think the military has uprooted them, but I can’t understand why,” he adds.

Unlike the quarter acre of land given to the displaced in Seeniyamottai, the lands in Pilakudiyiruppu are noted for both their fertility and proximity to the sea ‒ allowing for a self-sufficient, cyclical lifestyle of farming and fishing. But dreams of cultivation and seafaring will need to be put on hold.

Says Saminathan, “There is only debris and jungle where our houses, pre-schools, and temples used to be. With many of our trees gone and our wells destroyed, cultivating will take time. We cannot begin fishing either, as most of our equipment was lost during the war. For now, we must focus on rebuilding.”

Jeyachithra (37), shares a tent with her husband, three young children, and her sister’s family. She says, “Whatever difficulties we face, we know this is our home. We know the worth of this land and how to work it.”

Sri Lanka Red Cross (SLRC) is one of the few aid organisations on the ground in Pilakudiyiruppu, working with the local authorities to provide resettled families with basic amenities like kitchen utensils, mosquito nets, mattresses, and sheets of tarpaulin.

SLRC Senior Manager of Communication and Partnerships, Mahieash Johnney, says that the need of the hour is houses, and support to resume traditional livelihoods. But Johnney concedes that aid agencies today face a shortage of funding and resources.

“When the war ended, international donors made so many promises, but as a humanitarian organisation, we see that the donor-base has completely dried up. We need help to bring these people up to a dignified, human standard of living. They are literally starting from zero,” he explains.

In light of the complete lack of facilities in Pilakudiyiruppu, Mullaitivu Government Agent R. Ketheeswaran says that families can continue to stay in Seeniyamottai until the Resettlement Ministry is able to provide housing assistance through a grant of Rs. 800,000 per family.

“The Government will provide houses but the villagers have been informed that they will have to return their land in Seeniyamottai afterwards. The state cannot afford to give one family two plots of land so we have the authority to revoke older permits,” says Ketheeswaran.

When Roar previously visited the protest conducted by families from Pilakudiyiruppu, one of the leaders, and President of a local Women’s Rural Development Society, Chandraleela, argued that villagers should be allowed to retain their lands in Seeniyamottai.

She said, “The military has been occupying our homes for over eight years. As reparation, the Government should let people keep the lands in Seeniyamottai. If not, they should cough up eight years’ worth of rent.”

A stone sign outside the only structure left standing in Pilakudiyiruppu. The paint has been scraped away but the text reading, “Officers’ Holiday Home,” is still legible.

As the SLRC hands out the little aid it can, and returnees focus on rebuilding their homes, the military presence in Pilakudiyiruppu is as evident as ever. According to Saminathan, only 54 out of 80 families had their lands returned. Adjacent to these released lands, military officers are still within the line of sight of returning civilians.

“Many people lost everything during displacement, including their permits and deeds. Around 30 families are now staying here with us, sharing tents with their friends and family. We try to support each other however we can,” says Saminathan.

“The Air Force says it will eventually release the rest of the lands but we don’t know how long that will be; it took us eight years to get this much. We feel uneasy being surrounded by barbed wire and having soldiers so close. The women are as insecure here as they were in Seeniyamottai,” he adds.

Meanwhile, in the neighbouring village of Keppapulavu, Chandraleela is now leading a protest outside the camp of the 54th Division of the Army. Unlike in Pilakudiyiruppu, protesters say that the structures in Keppapulavu are still intact, having been renovated and repurposed for military use.

Despite offering leadership for Pilakudiyiruppu’s displaced families, Chandraleela’s own ancestral land is in Keppapulavu. She claims that her family home is currently being occupied by an Army Brigadier from the 59th Division.

“We have seen that we only get what we want when we take to the streets,” says Chandraleela. “Rain or shine, I will stay here with my people ‒ until we get all of our lands back.”