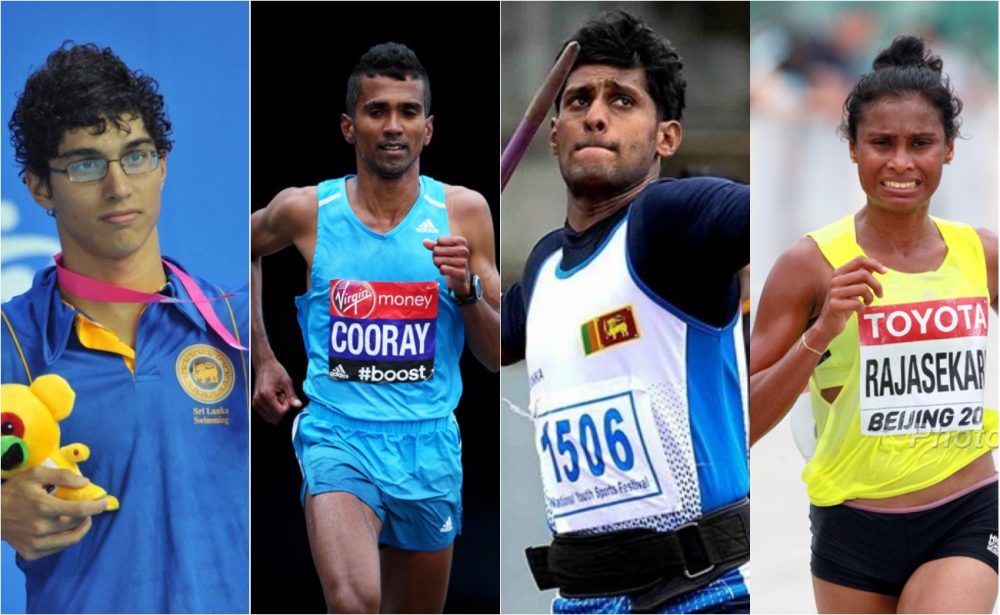 The 2016 Summer Olympics is now only a month away and Sri Lanka has qualified to make its 17th Olympic Games appearance this year in Rio de Janeiro, Brazil.

While most of the world may associate our sporting achievements primarily with cricket, what people have a tendency to forget, is that we have also made our mark in athletics and swimming.

Duncan White and Susanthika Jayasinghe helped Sri Lanka shoot to fame in athletics years ago, and more recently, names such as Matthew Abeysinghe and Kimiko Raheem have entered the famed halls of Sri Lankan swimmers.

The National Olympic Committee on June 28 announced that seven sportsmen and women will represent Sri Lanka at next month’s Olympics. Of these, two marathon runners, a javelin thrower, and a swimmer have qualified to contest, while the others have made it to the team as ‘wild card’ participants.

Secretary General of the National Olympic Committee of Sri Lanka (NOC), Maxwell de Silva said in a recent media release, “So far, three athletes have gained qualifying standards. Two swimmers, a shooter and a badminton player too have been included in the contingent.”

Following his statement, however, one swimmer ‒ Matthew Abeysinghe ‒ received Olympic qualifications, bringing the number of Sri Lankans who had received qualifying standards to four.

Although Sri Lanka also expected wild card entries for a judoka and a weightlifter, it is unlikely that they will get an opportunity to participate, as the deadline for Olympic entries is on July 11.

While it is commendable that four national sports personalities have qualified for the prestigious sporting event, concerns have been raised as to whether Sri Lanka is utilising its full potential where sporting talent is concerned.

Former Olympian and current President of the Sri Lanka Athletics Association Sugath Thilakaratne recently told the Sunday Times that he expects to increase the number of individuals who participate in athletics representing Sri Lanka this year.

However, Sri Lankan athletics appears to be facing more challenges than opportunities. According to Thilakaratne, “the biggest problem we are facing at the moment is not having good training and competition. The Sugathadasa Stadium is closed down and the standard of the Diyagama Stadium is not up to date. There is also a vacancy for a national coach. Appointing a new coach is not our task. That is a job for the Sports Ministry.”

These shortcomings aside, what we do know as of now is that a number of our best sportsmen and sportswomen will soon be heading to Rio de Janeiro.

Cooray is a national record holder and has represented Sri Lanka in the 2004 Olympic games finishing 30th out of 113 in the marathon with a time of two hours, 19 minutes and 24 seconds.

In 2015, Cooray gave his best performance to finish 14th in what was not only a new personal best by just over two minutes, but also a new national record with a time of 2 hours, 13 minutes and 47 seconds, breaking the previous record set by Lucian Rosa in the 1975 Fukuoka Marathon.

A long-time marathon runner, Rajasekara qualified for the  marathon event at Rio 2016 during last year’s Hong Kong marathon where she came in fifth. She also set a new Sri Lankan record with a time of 2 hours, 40 minutes and seven seconds.

Prior to this, she competed in the marathon event at the 2015 World Championships in Athletics in Beijing, China, finishing 49th.

Ranasinghe cleared a distance of 83.04 metres by more than three metres in his fifth throw breaking the national record held by Asian Championship medallist Sachith Maduranga .

He achieved Olympic standards after he became the first Sri Lankan male thrower in the history after he bettered his mark made by 0.04 metres.

Abeysinghe is the first swimmer to qualify under the Olympic Standard (B) to represent Sri Lanka in the Rio 2016 Olympic Games.

Karunaratne at the 2014 Commonwealth Games, stretching for a return shot to the opponent. Image credit: Getty Images/Toru Yamanaka

On July 30, 2012, Karunaratne defeated Kenichi Tago of Japan 2–0. Karunaratne defeated Tago 21–18, 21–16 in 44 minutes at the Wembley Arena in the Olympic men’s badminton singles Group C at the 2012 Summer Olympics, earning him the moniker of “Sri Lanka’s Undisputed Champion”.

At the time, AP quoted him as saying: “This is the biggest win in the history of Sri Lanka badminton.”

At the 2014 Commonwealth Games, Karunaratne was knocked out of the men’s singles by Srikanth Kidambi. He was also part of the Sri Lankan mixed badminton team, which was knocked out at the quarterfinal stage by England.

He will be a wild card entry for this year’s Olympics.

Dharmawardhana, a first timer, will be a wild card entry in the Olympics.

This is also the first time Sri Lanka will be represented in Judo, selected as per the requests made to the International Judo Federation by the National Olympic Committee.

This 10-metre air rifle and the 50-metre rifle prone shooting master has been included in the Olympics team as a wild card entry.

Samarakoon had competed at the 2012 Summer Olympics in the men’s 10-metre air rifle and men’s 50-metre rifle prone.

She won the highest number of medals by a Sri Lankan woman at the 2016 South Asian Games in India. She is the younger sister of former swimming champions Mayumi Raheem and Machiko Raheem.

She was a semi-finalist at the 100-metre backstroke event at the 2014 Commonwealth Games in Glasgow. She holds numerous Sri Lankan national records and South Asian records in her name.

The 2010 Commonwealth Games bronze medal winner in the 62 kg event will take up the 63 kg event in this year’s Olympics as a wild card entry.

He was also able to secure the gold medal for the men’s 62 kg weightlifting event at the 2016 South Asian Games.

We at Roar wish the Sri Lankan Olympic team all the very for the Rio 2016 Games!