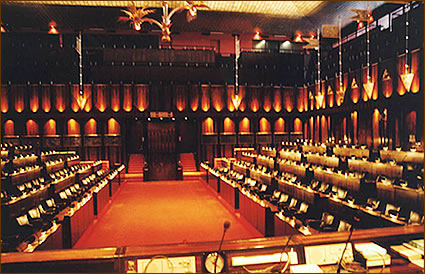 December’s first week began with a bang both locally and internationally. Locally, we saw the passing of the budget while on the international front things look rather bleak for Syria.

The second reading of the 2016 Budget was passed on Wednesday (December 2) with a majority of 107 votes in Parliament, with 159 MPs voting in favour. Fifty two voted against, including some MPs in the Joint Opposition and the Janatha Vimukthi Peramuna, while 13 other members were absent for the vote.

The Tamil National Alliance, for the first time in the recent past, voted in favour of a national budget. Amongst notable absentees was United People’s’ Freedom Alliance Kurunegala District MP and former President, Mahinda Rajapaksa.

Parliament this week witnessed the passing of the budget, as well as the Right to Information Bill. Image credit: President’s Media Division

Saudi has condemned a Sri Lankan woman to death by stoning

In a last minute bid to save a 45 year old Sri Lankan mother of three from being “stoned to death” for adultery in Saudi Arabia, Foreign Minister Mangala Samaraweera met the Saudi Charge d’Affaires here, and sought  “clemency” for her.

Although there was speculation that the death sentence would be carried out today, latest reports have dismissed this, while the exact date of the sentencing is yet to be known.

A Dawadmi court in Riyadh had sentenced the un-named woman to be stoned to death, while her unmarried Lankan paramour was sentenced to 100 lashes  for “fornication”. In the light of this harsh sentencing, the appointment of Saudi Arabia to Chair the UN Human Rights Council has received much criticism.

The Government Medical Officer’s Association (GMOA), along with 17 other trade unions and professional associations, commenced an island wide  strike on Thursday (December 3).

The strike was in protest of the government’s decision to abolish the doctor’s pension scheme, and the cancellation of the duty concession on vehicle permits.

The strike did not involve emergency services personnel, and was supported by all hospitals islandwide.

However, the strike was called off in less than 24 hours after PM Wickremesinghe proposed that public sector officials will be given concessionary duty free vehicle permits once in 10 years.

The death of ruggerite Wassim Thajudeen was confirmed a homicide in the final report submitted to Court on Thursday by a board of medical officers.

According to this report, the victim had not been driving at the time of the accident, and his body had been transferred to the driver’s seat after being assaulted. The report also states that the cause of death was the result of multiple injuries to the victim’s legs, neck and chest. The car had caught on fire after the death of the victim, or a few minutes prior to his death.

Thajudeen’s burnt body was found in a vehicle near the Shalika Grounds in Narahenpita, on May 17, 2012. His death was at the time declared an accident by the police. However, after the massive uproar of a cover-up conspiracy, which involved the previous government, police investigations recommenced this year.

Legal action has been taken against 13,095 motorists for violating lane regulations that were implemented last week.

These individuals who are facing legal action include 7,874 charged with negligent driving violating the lane law, 1,936 charged with not driving on the left side of the road, and 3,285 charged with illegal parking. The strict monitoring of lane laws is expected to continue for several weeks.

Tamil Nadu’s capital city Chennai is in dire straits following floods that have killed up to 270 people, and wreaked havoc across the city. The floods occurred following the heaviest rains in over a century.

Cameron called for airstrikes on Syria, but not all of Britain agrees. Image credit: Getty Images

After more than 10 hours of tense debate, lawmakers voted in favour of airstrikes, by 397 to 223.

Given Britain’s diminished role on the world stage, the victory hands Cameron the chance to restore Britain’s standing in global affairs. He had urged lawmakers not to turn their back on allies such as France in their time of need.

Many British voters are wary of being dragged into another war in the Middle East, which led to several protests outside of Birmingham and Manchester.

Police are searching for up to three gunmen who killed at least 14 people at a social services centre in San Bernardino, California.

Officers said there were also 17 wounded in the attack at the Inland Regional Center, which helps adults with disabilities.The gunmen, wearing military-style clothing, entered the building and opened fire before fleeing in a black SUV.

Witnesses said people locked themselves in offices as the gunfire rang out.

He killed his girlfriend Reeva Steenkamp in February 2013, after shooting her four times through a locked door. He is currently under house arrest after spending a year of his five-year sentence in jail.

Pistorius will now have to return to court for a new sentence to be decided.